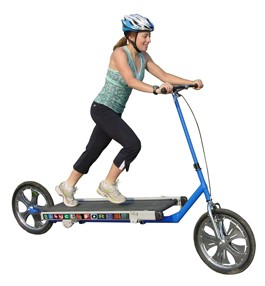 This is honest-to-God the dumbest product I’ve ever seen advertised.

—Customer review of the Treadmill Bike on BikeForest.com

We’ve all been to garage sales where stray pieces of forgotten and largely unused fitness equipment are offered, still in the battered box. We’ve all seen late-night infomercials about the latest running or weightlifting or yoga gadget that’ll trim up your abs and tighten your butt for one low payment of $19.95. We’ve all witnessed absurd fitness trends in their various thighmaster-y forms, and the altogether desperate ways in which shyster entrepreneurs attempt to separate overnourished Americans from their money.

And now we have a winner. The height—or depth—of absurd fitness accessories has been reached. It truly does not get any more ridiculous than the Treadmill Bike, developed in Canada. It’s just what it sounds like—a treadmill connected to wheels. When you run on the treadmill, the wheels propel you forward. Down the street.

The Treadmill Bike’s product description contains plenty of flowery marketing terms. “Have you ever wished you could get a quality treadmill workout without paying expensive gym prices?” it asks. “Look no further than the Treadmill Bike by the Bicycle Forest. The Treadmill Bike offers the same fat-burning benefits of a conventional treadmill, without the membership fees!”

Naturally, it’s been illuminated as the invention of morons by numerous websites, by a handful of cable television shows and, of course, by comments on the bike’s incredible YouTube ad. “This is absolutely stupid,” writes a typical reviewer. “It’s totally useless. Why would anyone buy this ridiculous thing? If one wants to run outside, he doesn’t need anything else but his legs!”

And that’s exactly the kind of reaction Brent Curry, inventor of the Treadmill Bike, hoped for.

On the phone with Curry, it quickly becomes apparent that he created the Treadmill Bike as an artistic statement on the ludicrous nature of fitness gadgets. By pushing, in his words, to “the extremes of ridiculousness,” Curry has artfully advocated basic exercise over expensive gadgetry. The fact that people take the Treadmill Bike seriously—or rather, think that he takes it seriously—only reinforces the success of his art.

Burry is an affable thirty-something Canadian who’s conceived and built numerous art-bikes to accent his bike-rental business in Ottowa; he also rents the Hula Bike, with an offset rear hub, the Family Truckster, with room for four, and the Couch Bike, which is exactly what it sounds like—a bicycle pedaled by two riders while loafing on a large couch. (Curry completed a 140-mile journey through Maritime Canada on the Couch Bike in 2002.)

The Treadmill Bike isn’t a joke, Curry insists. It’s for sale, although no one’s bought one yet, and it does help people to get fit. “There’s definitely a lot more resistance in the Treadmill Bike than if you’re simply running,” he states, “so it’s a much harder workout.”

The angry reactions his invention inspires are surprising to Curry, since the YouTube ad is marked by such spoof hallmarks as stifled laughter, improbable situations and improper use of hip-hop slang. “I don’t think the video production quality was all that high, but people seem to be totally taken in that it’s this completely serious commercial product,” he says. “I guess when I get responses like that it makes me all that much more glad that I made the bike as a bit of a statement.”

Not everyone lured by the marketing of the Treadmill Bike thinks it’s altogether useless. A television show in Germany gave it a serious evaluation, monitoring the aerobic intensity and increased heart rate of its use. And the Japanese love it. “They seem to have a mix of fascination and confusion about the whole thing,” he says.

Curry, himself a triathlete, has no problems with the overblown fitness industry per se. He understands the need for products that are primarily aimed at fitness and not any practical purpose. But personally, Curry hopes that his message gets across every time people come across his Treadmill Bike and think that it’s silly.

“It’s silly that people drive their cars to the gym just to run on a treadmill!” he retorts. “There’s lots of other ways to get your exercise.”