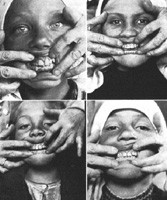 The Price of Health

At her last dental appointment, my seven-year-old daughter had such a huge cavity, the dentist uttered those two most ominous words, “root” and “canal.” Think of a mother’s agony! After providing all those snacks of carrots and celery, being such a candy cop, pushing that multivitamin with fluoride, whipping my daughter with floss, this is the thanks I get! But maybe the culprits aren’t sugary treats and lax hygiene. Maybe–and I realize this doesn’t necessarily let me off the hook–there’s something integral to the modern diet that lends itself to bad dental health in general, as well as other more serious medical problems.

That’s exactly what Weston A. Price thought. Born in 1870, Price, a Cleveland dentist, traveled the world studying the diets of isolated people unexposed to the modernized diets of refined grains, pasteurized milk, white sugar and other processed foods. There in the sequestered communities of Melanesia, the Swiss Alps, Peru, the Hebrides and Alaska, he spread people’s lips wide for a series of photographs revealing teeth almost universally straight, uncrowded and cavity-free, although the hygiene sometimes left something to be desired. More importantly, he found that occurrences of cancer, tuberculosis, heart disease and physical deformities were practically unheard of.

What the diets of these diverse cultures had in common, Price discovered, was a reliance on foods with high water-soluble and fat-soluble nutrients such as dairy (from cows, goats, camels, musk ox), organ meats, fish and eggs, and an absence of processed, refined or denatured food. Though one would be hard-pressed these days to find anyone championing processed foods, Price’s model certainly flips the food pyramid on its point.

Fats and oils are usually treated as incarnations of evil, and yet this diet touts lard, butter, coconut oil, tallow and that old cure-all, cod liver oil–all of which the foundation claims is good for the heart and help to prevent a whole host of other diseases. Red meat and eggs? Whole milk? For many people, being reunited with such beloved foods is a dream come true. It’s no wonder Weston Price, who died in 1948, retains so many followers.

Almost half a century after his death, the Weston A. Price Foundation was created in 1999, and now, led by Sally Fallon, has thousands of members in 390 local chapters in 29 countries around the globe. Although many of the foundation’s tenets and goals are familiar territory–organic and biodynamic farming, pasture-feeding of livestock, community-supported farms, truth in labeling–some are more controversial, including a soy alert campaign that exposes what the foundation believes is the toxicity of soy and calls for a ban on soy formula for infants. The foundation also has an active campaign for “real” milk to ensure universal access to clean, certified raw milk.

It can be hard to know which side to believe. Depending on whom you ask, drinking raw milk is either playing Russian roulette with scary pathogens or enjoying milk as it’s supposed to be consumed–full of vitamins, proteins, useful bacteria and crucial enzymes that would be destroyed by the high heats used in the pasteurization process. The Weston A. Price Foundation contends that raw milk strengthens the immune system, builds stronger bones and teeth, and protects against psoriasis, asthma and many other allergies. Reports of illnesses from raw milk consumption, they say, are trumped up or overstated.

While the debate rages, sale of raw milk for human consumption is legal in 28 of the 50 states, including California. (You can purchase raw milk from Claravale Farm or Organic Pastures at Community Market in Santa Rosa, but it ain’t cheap. A half gallon of raw whole milk runs more than seven bucks!) People in states where it’s illegal to buy raw milk have gotten around legislation by purchasing milk for “animal” consumption or embarking on cow share programs, where several families pay for the upkeep of their own cow in exchange for her milk. Still others take a do-it-yourself approach, tending their own animals.

I called on one such pioneering individual to learn more. A chapter member of the Weston Price Foundation, western Sonoma County resident Jackie Screechfield came to the group through a nexus of events. She met Occidental chapter leader Marcel Rodin soon after she’d suffered a miscarriage and had almost bled to death. “I realized I needed more iron, more blood,” she says. Until then, she’d been primarily vegetarian, living on a hill above the village of Occidental in a yurt she’d constructed herself. “A lot of what Weston Price said made sense to me. It was what I was doing anyway–living on the land, growing my own food.”

Screechfield no longer lives in the yurt; she’d found there was such a thing as living a little too close to nature. The house she lives in now has evolved from an enclosed kitchen into an assemblage of rooms, built from salvage and added one by one. The land she lives on does not belong to her but to her landlord, who, upon hearing of her vision, offered a corner of his land on which she could build. Her lifestyle by most American standards is austere–she works part-time as a handywoman and massage therapist, getting by with frugality and barter–but it’s also rich in variety and the joys derived from simplicity and self-sufficiency.

In addition to foraging nearby for miner’s lettuce, mushrooms, elderberry, shellfish and seaweed, and growing a magnificent garden full of greens, vegetables and fruits, she rears chickens, sheep, rabbits and goats. It’s plenty for her and her six-year-old daughter, Mary, both of whom seem to glow with robust health. In most things, Screechfield accepts what comes her way. She’s not averse to collecting a deer downed by a car when friends alert her to the fresh road kill. Nor is she squeamish about the death involved. She even packs a .22 to slaughter her own animals. “I prefer to do it myself then to see the awful irradiated meat at Safeway,” she says. “It keeps me humble and shows respect for the animal.”

Recently, one of Screechfield’s adopted dogs attacked her mother goat, the family’s sole source of milk. The dog had shredded the mama goat’s udder and hindquarters, and left her for dead. As great as the loss was, Jackie met it with a philosophical forbearance. She fed the damaged meat to the rest of her dogs, prepared the good meat for eating, cured the mama goat’s hide and took stock of her new circumstances. She explains that although it would be several months before mama’s doeling would be old enough to produce milk, maybe another goat would come her way, the tides and seasons of fortune being what they are.

Although she embraces the tenets of the foundation, Screechfield doesn’t preach the teachings of Weston Price, nor does she favor sitting around in meetings talking. She’d rather be in her garden picking ripe plums or staking her billy out where he can clear the weeds. She sees her role within the organization as steering people toward their own spiritual journey with food, their own process of claiming their health. Sharing with my children some of the raw goat cheese she sent home with me, I wonder if I’m beginning to taste my place in that journey.