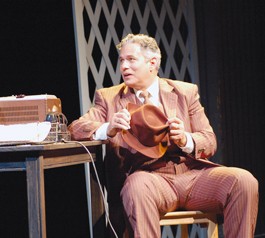 “It’s been intense,” says director-actor-educator W. Allen Taylor following a busy week preparing Arthur Miller’s Death of a Salesman for last weekend’s opening at the College of Marin in Kentfield. “It’s a long play and a difficult play,” he acknowledges, “but it’s a great play. These last few weeks have been quite a ride, but a good ride.”

Taylor says he had no idea, when they added Miller’s play to the current schedule, that anyone else in the area was doing the same show, let alone opening it on the same day, as Santa Rosa’s Sixth Street Playhouse did last weekend (see review, p34); Antioch’s Hapgood Theatre Company, in the South Bay, is the third production to open in the Bay Area last weekend, to which Taylor responds, “I love it! It’s the theater gods at work. There’s clearly something in the Zeitgeist that makes this play appropriate right now. And the economic news of the last few days makes it all the more timely. There is definitely something in the air, a sense of looming instability, not just in the economy, but our very direction as a society.”

According to Taylor, whose directorial efforts have established him as one of Marin County’s most interesting directors to watch, Miller’s tale of Willy Loman, a hard-working American at the end of his rope, has never been more timely.

“With economic issues on the front burner for America,” he says, “it’s easy for us to identify with a Willy Loman, someone fighting to get some attention for all the work they’ve done. Death of a Salesman is about the pitfalls of the American dream, about how easy it is to become a casualty of that dream. A lot of people are having to face that very thing right now.” These issues are reflected in Taylor’s production, from the pacing of the action to the design of the set by Ron Krempetz, inspired by the moral and spiritual precipice Miller’s characters find themselves teetering on.

“We’ve tried to use Willy Loman’s house a s a metaphor,” says Taylor, “to give it even more meaning.” Featuring Bill Clemente and Stephanie Alberg as Willy Loman and his long-suffering wife, Linda, College of Marin’s Death of a Salesman runs through Oct. 19. Friday&–Saturday at 8pm; Sunday at 2pm. Fine Arts Theatre, COM campus, 835 College Ave., Kentfield. $10&–$15. 415.485.9385.