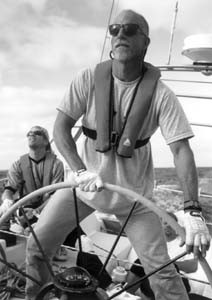 At the wheel: Crewmen Richard Bartol (left) and Mike Burrelle help pilot a vessel with a divided crew across the stormy Pacific Ocean in The Human Race.

THE STARTING LINE was only inches away. Robert Hudson–perched on the deck of the tiny sailing vessel he was about to race across the Pacific Ocean–was beginning to forget how utterly exhausted he was, to forget how much effort it had taken just to get this far.

A mere 90 days before, all of this had been only a dream. That Hudson had managed in so short a time to find a sailing vessel, a captain, a crew of 11 and enough provisions to feed everyone was nothing short of a miracle. Never mind that the boat was seriously underequipped for the 2,200-mile voyage, or that half the crew had little or no sailing experience, or that the race they were about to begin–the legendary transpacific race from Los Angeles to Hawaii–has for nine decades been considered one of the toughest, most grueling oceanographic competitions in the world.

Never mind, even, that many of the crew–all of whom were HIV positive–had been at death’s proverbial door less than 12 months ago.

For one moment, Hudson forgot all that, as the gun went off and The Survivor–the aptly chosen name of their vessel–sailed smoothly across the starting line.

“I felt this incredible, exhilarating feeling,” the former stockbroker explains. “I was thinking, ‘Wow, I’m here. We’re on our way. We’ve done it.'”

“That feeling lasted about one minute,” he laughs. “It lasted until I realized, ‘Oh my God! Now I have to actually do this.'”

What followed was a 10-day voyage in which Hudson learned that exhaustion was a relative term. Sailing day and night, the crew seldom had more than two hours sleep at a time, enduring some of the roughest seas in the 90-year history of the transpacific race, due to the surprise arrival of Hurricane Dolores. As problems mounted, including a rapidly deteriorating vessel and several narrowly averted capsizings, the crew became rapidly divided between the experienced sailors–who, led by Capt. John Plander, were growing confident that they might actually win the race–and the rest of the men, who were increasingly alarmed at the risks being taken, risks that Hudson feared might drown them all.

Fortunately, all of this real-life action adventure in July of last year was captured on film by director Bobby Houston, who, after surviving the race relatively unscathed, ended up with the daunting task of cutting 100 hours of footage down to a mere 88 minutes. The result is The Human Race, a stunning, stirring documentary that has been taking film festival audiences by surprise as it works its way across the country. Houston, a veteran director of such low-budget films as the cult-hit Shogun Assassin and the art-world satire Trust Me, had retired from filmmaking following the AIDS-related death of his partner, Stuart Kaplan.

Now, with the critical success of The Human Race–championed by Oliver Stone and recently purchased by HBO–Houston is sifting through numerous offers to return full-time to making movies. The film will be screened locally as part of the eclectic lineup of the 12th annual Wine Country Film Festival.

“I invited Bobby to come along and film the voyage because it’s important for people to have role models, and people with HIV need to see that a positive diagnosis doesn’t mean you have to sit around waiting to die,” explains Hudson, who will attend the Sonoma screening with Houston and other members of the crew. “This is not just a movie about a band of HIV-positive sailors. It’s a movie about a band of just-guys, all behaving like themselves, all pulled together for a wild misadventure.”

As for the race itself–with all of its inherent dangers–Hudson says he didn’t have room for everyone who wanted to be a part of it.

“I figured, we’d already gone through the hellish task of being diagnosed with AIDS or HIV,” he says. “Sailing across the Pacific was pretty much secondary to that.”

Asked what he learned from his transpacific experience, Hudson takes a long pause.