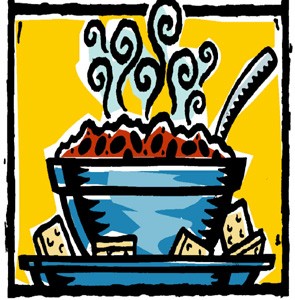 Some Like It Hot: The Great Petaluma Chili Cook-Off hopes to raise $150,000 for kids’ theater education.

Summer is nearly upon us, and nothing heats things up like a steaming bowl of chili and an ice-cold beer. To many, chili is pure pleasure in a bowl, and Laura Sunday, the self-proclaimed “Chili Empress” of the annual Great Petaluma Chili Cook-Off, considers the fiery food to be one of the great pleasures of gastronomy. In addition to making mouths happy, the annual bowl o’ red competition has raised much-needed money for the Cinnabar Theater, so that any local child who expresses an interest can participate in the performing arts program.

When Sunday, the president of Cinnabar Theater’s parents guild, went to a chili cook-off in Marin in 1997, she realized that she could do an event like that in Petaluma. Now in its ninth year, the chili cook-off expects to draw more than 1,300 people and should crest the $150,000 mark in donations. With 35 varieties (and counting) of chili available to sample, as well as homemade salsas and microbrews, attendees and local celebrity judges are going to have to rely on having strong stomachs and plenty of palate-cleansing beer to properly taste the entries.

There are many legends and stories about the origin of chili. Although a recipe calling for venison or antelope meat, onions, tomatoes, and chile peppers was documented in a 17th-century Southwestern American Indian legend, later records found by Everette DeGolyer, a Dallas millionaire, indicated that the first chili mix (consisting of pounded dried beef, fat, pepper, salt and chile peppers) was concocted around 1850 by Texan cowboys.

As with so many other great ideas, chili’s inception was probably prompted by need. Pioneer J. C. Clopper, a diarist whose homespun writings illuminate early Texas history, wrote about San Antonio’s chili carne in 1826: “When they have to pay for their meat in the market, a very little is made to suffice for a family; this is generally into a kind of hash with nearly as many peppers as there are pieces of meat–this is all stewed together.” Grander versions of the dish evolved at Hollywood’s swank spot of the noir era, Chasens. Restaurant owner Dave Chasen affectionately called his a “bastard” chili and insisted that it be frozen for a week before serving.

And when it comes to chili cook-offs, the North Bay by no means has a lock on the idea. In fact, the concept only recently crossed the Rio Grande, the first such storied event being organized by Texas newspaperman Joe E. Cooper in 1952 to promote his chili “biography.” Far more famous, however, was the 1967 event in Terlingua, Texas, prompted when another journalist, H. Allen Smith, tauntingly titled a magazine article “Nobody Knows More about Chili Than I Do.” Outraged readers immediately challenged Smith’s supremacy with a legendary cook-off. These days, according to the Chili Appreciation Society International, some 400 cook-offs are held in the United States each year alone.

A most vexing cooking question remains: What goes into making a great bowl of chili? After chiles, which some Spanish priests preached against as an aphrodisiac during the 19th century, meat is the most important part of chili, and probably the most analyzed ingredient. The generally accepted carne is beef; the specific cuts: chuck, flank and even sirloin. In the debate of meaty matters, it is generally agreed upon that hamburger meat makes lousy chili. One-half-inch cubes of beef seem to be the established norm. And if you’re lucky enough to own an electric meat grinder or have access to a local butcher, the classic “chili grind,” where three-eighths inch or half-inch holes in the blades of the meat grinder are used, is really the Rolls-Royce of chili meat choices.

But when it comes down to it, chili isn’t high art and shouldn’t be treated that way. Cook-off contestant Larry Petersen, a firefighter and former third-place chili winner, says, “I think what makes our chili so exceptional is that it’s made at the firehouse with some of the most creative firehouse chefs. It’s a crew effort. I would add that most firefighters are good cooks due to the razzing they would receive if they served a bad meal to the crew.”

Secret ingredients aside, Petersen’s team’s strategy is simple. “First of all, make sure everybody has a fun time. After that, it’s prank time. The fire-department atmosphere is one of practical jokes and a lot of razzing, so we try to take advantage of every opportunity to pull any practical joke. So look out,” he chuckles. However, Petersen does recall a prank that didn’t play out so well. “Two years ago, Petaluma [fire station] set up a bag of flour above our booth and hooked up a water line. At the right time, they would pull a string ripping open the bag and then turn on the water. Well, they missed the booth and it went all over the floor. It was a slippery mess.”

Cattlemen’s restaurant and Willowbrook Ale House also have a friendly rivalry. Heather Nelson, the banquet and marketing coordinator for Cattlemen’s, says, “It all started when we kidnapped Willowbrook’s trophies. We brought them back to our home, and sent Willowbrook ransom notes telling them that the trophies loved their new home.” Willowbrook retaliated, the kidnapping continued, and Nelson hints that this year’s prank is still in the process.

Aside from the hijinks, beer and food, the Great Petaluma Chili Cook-Off plays an important role in helping creative kids nurture their talents. “My children, Jessie and Gabriel, have come through the Cinnabar program and are off creating exciting, wonderful lives with the confidence and self-esteem they learned through being involved in the performing arts,” says Laura Sunday. “We have the perfect community to bring together restaurants, businesses, service organizations and individuals for a fun event that raises needed dollars.” Besides, she smiles, “People often tell me it’s the event they look forward to more than any other.”