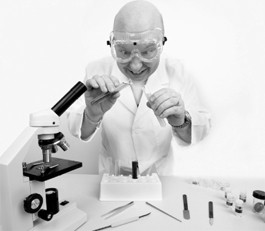 The Dow of Food

A short primer on the horrifying ingredients in everyday foods, and how to avoid them

Editor’s note: This story was prompted by an innocent-looking blueberry buckle that was left out in our office as a treat. After reading the polysyllabic chemicals comprising this foodstuff, we accordingly handled it like a nuclear device that had suddenly begun to tick. But even just last year, many of us wouldn’t have thought twice about digging right in.

Even at the natural-foods store, harmful food additives lurk behind innocent-looking labels. Hundreds of shoppers who reached for “Quorn” veggie burgers, for example, became ill with severe vomiting and diarrhea when that product was introduced to the United States from Britain in 2002. Others developed hives and had trouble breathing. It wasn’t clear from the label, but Quorn is made from an allergy-inducing mold called Fusarium venenatum.

Others who purchase products like juice, yogurt and ice cream listing “natural colorings” are in fact eating tiny ground-up bugs. Disguised as an additive called “carmine,” the insects can cause a severe allergic reaction or even anaphylactic shock in sensitive people.

Most of the FDA tests on food additives are conducted and paid for by the manufacturer, so there is a built-in potential for ethical conflicts. It pays, then, to read labels carefully. “It’s a matter of equipping your tool belt with knowledge about the most problematic additives,” says Craig Minowa, an environmental scientist with the Minnesota-based Organic Consumers Association. “There’s all sorts of stuff hidden in there.”

Chicago nutritionist David Grotto, a spokesman for the American Dietetic Association, puts it this way: “If you can’t pronounce it, it would probably make sense to avoid it in food.” He adds that if a product has an ingredient list longer than your arm, it should be avoided.

Minowa, Grotto and Michael Jacobson, executive director of the Washington, D.C.-based Center for Science in the Public Interest (CSPI), offer this list of offenders:

In the tricky world of food additives, it pays to approach labels like a detective. Companies can call their food organic even if they only have one natural ingredient combined with 20 synthetic ones. The only truly safe way to buy organic is to look for the green certified organic label.

Manufacturers don’t have to list MSG on labels. They can hide it in yeast extract, tuna broth, chicken broth and “hydrolyzed vegetable protein.” One sure way to avoid MSG is to buy only certified-organic products. Organic companies can’t get the certification if MSG shows up in their food.

Consider the way additives might react together in the body or break down into different chemicals altogether. For example, recent news reports pointed to the carcinogen benzene in soda pop. If exposed to heat (like intense sunlight), the preservative sodium benzoate will mix with ascorbic acid to form a toxic cocktail.

Food safety and nutrition experts suggest that consumers sticking to a budget should invest in organic meat and hormone-free milk first. Join a consumer supported agriculture program. Shop at farmers markets. Buying local produce is good for the environment because it prevents long-distance shipping. The produce also is lower in pesticides. Drink water, homemade sun tea or 100 percent fruit juice instead of soda laden with high fructose corn syrup or aspartame.

Food additives present so many pitfalls, shopping can be overwhelming. The key, experts say, is to prioritize. For Jacobson, the biggies are trans fat, sugar and salt. “Those three additives are a thousand times more dangerous than anything else in the food supply,” he says. “If fast-food chains would agree to cut them in half, we could save hundreds of thousands of lives lost to heart attacks and cancer.”