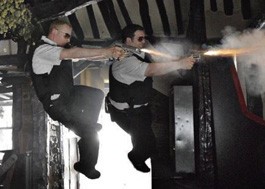 Moping over his personal and financial success, Woody Allen commented, “Comedy sits at the children’s table.” He meant that only drama gets respect, and that’s what led Allen into the field of faux Scandinaviana.

But when it comes to pure cinematic invention, nothing beats comedy. Comedy is the laboratory where visual ideas are tested; drama picks up on them later, after they’ve been proven to work.

Hot Fuzz is director Edgar Wright and writer Simon Pegg’s follow-up to Shaun of the Dead. It represents movie comedy at its best, an irresistible high-low mix of gross slapstick, whip pans and whiplike wordplay.

Wright and Pegg have built their film in the way the best British comedy is built. Maybe nothing since Fawlty Towers has had such terrific comedic structure to it–the sense of a heavily worked-out plot to make the gags all click in the last reel.

As an action director, Wright has learned from Martin Scorsese and John Woo, but he has subtracted the relentless het-up-ness of such directors. In Hot Fuzz, the speed of the technique looks less desperate and more confident. And the movie boasts stars, too. Seeing Nick Frost and Pegg makes you think more about Laurel and Hardy than Will Ferrell and whomever he is co-starring with this week.

Hot Fuzz runs in haste from the beginning. A montage outlines the superiority of supercop Nick Angel (Pegg), who shames the rest of the London police with his perfect arrest record. Then his bosses–supercilious (Martin Freeman), supercillier (Steve Coogan) and supercilliest (Bill Nighy)–kick him sideways, transferring him to the postcardy village of Sandford. There, being a policeman consists of rousting loiterers and rounding up a stray swan.

Angel is teamed with Danny, the Charles Laughtonish Frost, last seen playing a fragrant but friendly zombie in Shaun of the Dead. Danny is clearly a constable because his dad (Jim Broadbent) is the chief of police.

The Sandford cop shop is packed with cake-eating idlers, including two tremendously snide plainclothesmen (Paddy Considine and Rafe Spall), louts who think they’re the coolest things in town. A policewoman, Doris Thatcher (Olivia Colman), with a sizable overbite and a fondness for horrible double-entendres, and a tottering geezer, whose most important function seems to be the ability to translate what the inbred local farmers say, round out the roster.

Angel’s arrival precipitates a chain of Agatha Christie-like murders. The policeman pursues the mysterious killer as well as pushing against the dead weight of his fellow police, who consider the murders a series of unfortunate accidents. The most likely suspect: a sniggering grocery store owner, played by a gloriously mean Timothy Dalton.

Hot Fuzz offers more than a Naked Gun collection of jokes; it is a postmodern version of a tender Ealing comedy. (If the film looks particularly affectionate, note that it’s shot in Somerset, where the director grew up.) Wright’s retro-heavy soundtrack also has a keen, loping rhythm that keeps the movie in pace. In , Wright told me that he wanted glam rock on the soundtrack, because the beat suggested to him the plodding of a foot patrolman walking. And in the opening, Angel’s résumé, as well as his social retardation, is outlined against the brassy chorus of “Goody Two Shoes” by Adam and the Ants.

Hot Fuzz is an almost insanely high-spirited film, as cheerful and good-natured as a movie can be when depicting a Grim Reaper-dressed assassin depopulating the countryside. (Be warned: The movie has a high gore quotient.)

The movie celebrates placid village life and realizes that such a vegetating life has to be stirred up a little with evenings of crap movies. And Wright isn’t blind to the discontents of all this cozy, half-timbered living; he knows a streak of intolerance can be found out if one digs a little.

If I have any complaint about Hot Fuzz it is that the title is inane. People look at you like you’re missing marbles when you praise a movie called Hot Fuzz. The title just seems too reductive. And then, the other night, we were flipping channels and stumbled on to a cop show called Cold Squad. Like police work, satire depends on careful research.