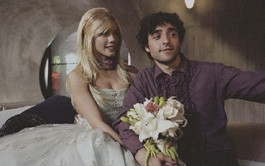 The Browncoats Are Coming!

What are you doing on June 23?

If you’re a true fan of Joss Whedon’s Firefly universe, you’re probably watching the movie based on it. That’s because June 23 has been declared Worldwide Serenity Day as part of the effort to keep the franchise going and inspire someone to finance a sequel. It wasn’t Whedon himself who organized this, but several loosely affiliated cells of fans. And if you’ve seen the hard-core fans of this franchise out at Serenity screenings, you’re probably not surprised that they’ve been able to organize 40-odd screenings of the film on the same weekend all around the world (or that the date they chose is Whedon’s birthday).

These folks often show up in the brown coats worn by Serenity’s captain (and his former revolutionary army). I think that Serenity is the second coming of the original Star Wars, and I stand by that. It inspired me to get the Firefly DVD to see the TV show it was based on, and I ripped through all of those episodes. By the time I was through, I could see why fans were so pissed about it being canceled. This was a series cut down long before it even got close to its prime.

In the short time he had to work with, Whedon flipped many a science-fiction cliché, played with narrative structures to an almost irritating degree, gave his characters refreshing shades of gray and delivered plots that sucked you in the way an engine turbine might if you were an enemy operative who stupidly swore to track down Malcolm Reynolds to the ends of the universe.

I still love the movie, too, though I have to admit that now having seen the series, I realize Serenity hit a couple of false notes with the established characters. (What is the deal with the enraged exchanges between the doctor and the captain? That’s something that didn’t need to be turned up a notch for the big screen).

The closest Serenity screening is at the Bridge in San Francisco; check out www.cantstoptheserenity.com for details about all of them. And don’t be embarrassed to support this effort because you think it’ll make you into some kind of nerd, because (1) if you’re considering going in the first place, you’re probably already a nerd; (2) it’s for charity, supporting Whedon’s favorite organization, Equality Now; and (3) this is really a very casual commitment, fanbasewise.

People write haiku about this shit, OK? And some of them are damn good, too.

For more information on the ‘Serenity’ watch-a-thon, go to www.sfbrowncoats.com. ‘Serenity’ screens at the Bridge on Friday, June 23, at 11:59pm. 3010 Geary Blvd., San Francisco. All screenings are entirely fan-organized. Who’s up for making it happen in the North Bay?