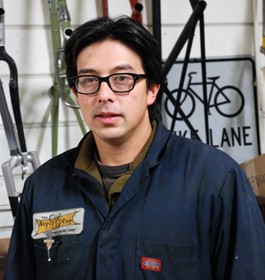 That’s How He Rolls

We here in the North Bay like locally grown products. We get our salad mix from Star Route Farms, our beer from Lagunitas and our goat cheese from Laura Chenel. So why not go the home-grown, artisan route when it comes to bicycles? In recent years, several custom-bike builders have set up shop in the North Bay, handcrafting cycles for those who want more than a standard off-the-rack ride.

One of those bike builders is where you’d least expect to find him. Jeremy Sycip of Sycip Designs has set up shop a few pedal strokes from Railroad Square, on Fifth Street near Wilson. Set among tony shops and restaurants, the easy-to-miss storefront leads back to an expansive machine shop, where Sycip cuts, welds and torches his bikes into shape.

But none of that happens until Sycip (pronounced “see-sip”) finds out what a customer wants. After lengthy conversations, “we take seven or eight body measurements, including height, inseam, femur, arm length, torso length, shoulder width,” Sycip says. These are fed into bike-design software that produces a drawing that tailors the bike to the customer. But the final design has as much to do with customer needs as with geometry. “If someone has a neck or back injury, they need to ride straight up,” Sycip says, so the bike is built to accommodate that.

Founded in 1992, Sycip Designs makes bikes that are as much about art as science. A student at the Pasadena Art Center in the early 1990s, Sycip decided he wanted more than art for art’s sake; he wanted art that could be put to work. “All the ideas were on paper, but I wanted to build something,” he says. “When I design or weld something, it’s cool to see it used.”

Sycip wants customers to know they can have just about anything they want in a bike, as long as it’ll still roll. Foot-long beer taps for shifters? No problem. A pair of cooler-size metal racks for gelato delivery? Consider it done. “I don’t normally make something like that,” Sycip says referring to the cargo bike with cooler racks, “but I took the project on because it was something different.” Prices start at $1,300 for frames, $2,200 for a fully built bicycle.

“Jeremy is constantly experimenting and changing things,” says Mauricio Rebolledo, a custom bicycle builder in Glen Ellen. “He’s very flexible; he rarely says no, which allows him to come up with different bikes for each client. He thinks about it and figures it out, then the bike is made simply and elegantly. He’s a talented craftsman and frame builder—it shows in his work—but he’s an incredibly humble guy.”

Lots of bike messengers buy Sycip’s bikes, which have a reputation for ruggedness, even after years of rough riding, Sycip says. (The first Sycip bike ever made, 15 years ago, recently came back to the shop needing just a paint job.)

Though many bike messengers have cheap beater bikes, some prefer designer bikes like Sycip’s for their comfort and durability. And some compete in the Cycle Messenger World Championships, an annual urban cycling race, so they need, Sycip explains, “bikes that won’t break.”

A native of the Philippines, Sycip emigrated with his family to California when he was 13 and settled in Fremont. His father was a car mechanic, and Sycip says he grew up “tinkering with stuff.” He discovered mountain biking as a teen and “thought it was the funnest thing I’ve ever done.”

After graduating from art school, Sycip apprenticed with an old frame builder in Santa Cruz called Rock Lobster and then attended United Bicycle Institute in Ashland, Ore., where he took frame-building classes. Sycip, who until recently worked with his brother, Jay, at the shop, now works there solo. (Jay has since moved to Portland.)

Now 38, Sycip is the father of a toddler but still finds time to ride. Reflecting his love of different types of cycling, Sycip makes all kinds of cycles: road, mountain and town bikes. “We used to make hardly any town bikes, but now with the gas crisis, we make more lightweight town bikes,”  he says.

Like just about everyone in the North Bay biking community, Sycip is enthused about the upcoming Tour of California. “The tour puts Santa Rosa on the map,” he says, “and it doesn’t hurt that Levi [Leipheimer] lives here.”  Or that Lance is coming to town.