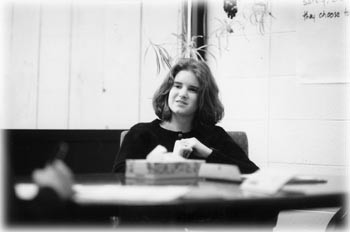 SITTING at the conference table in a small, no-frills Santa Rosa office, Heidi Peyser, 17, peels long flakes off a croissant and nimbly guides them to her mouth. “I forgot to eat,” she apologizes with a slight shrug and a smile. The school day is over for the Montgomery High School senior, but her second shift is just beginning–as a teen mediator, Peyser helps resolve conflicts between juvenile offenders and their victims.

Peyser is one of eight teenage mediators who volunteer in a Redwood Empire Conflict Resolution Services diversion program that brings youthful offenders and their victims face to face to try and resolve conflicts outside of the juvenile-criminal courts and in a non-adversarial way.

“We’ve found that younger people can really facilitate the process because of their age, openness, and creativity,” says Richard Merriss, the newly hired coordinator for the program and a former volunteer.

In addition to the offender-victim program, RECOURSE will offer in mid-November a parent-teen reconciliation mediation training session for volunteers, both adults and teens. The weekend course will foster communication and listening skills for mediation between youth offenders and their parents. After completing the training, volunteers may work on cases referred by Juvenile Hall to reunite parents and teens with a basis for improved communication.

“This is a pioneer program to have mediators available at the time a youth is taken into Juvenile Hall,” Merris says. “It’s to help a young person who shouldn’t be spending a night at Juvenile Hall just because of strained conditions between the young person and his or her parents.”

Darryl Datwyler, director of Juvenile Hall, welcomes that program, not because of limited space at juvee hall, but because the program helps achieve understanding between youths and their parents. “There’s rarely a day goes by when we don’t get a child that we have to detain, not because of delinquent conduct or because they pose a serious security risk, but where there are family issues,” he explains. “Frequently parents are reluctant to accept a child back because they’re concerned about continuing problems.

“We’d prefer to resolve issues within the family rather than hold children here and then just have them return to deal with the same issues.”

While the ongoing focus is the resolution of problems and disputes, volunteers say their mediation work gives them a better appreciation for life overall. Originally drawn to the reconciliation program because she intends to work within the criminal-justice system, Peyser says, several months as a teen mediator have had a profound effect on her.

“I’m finding that I’m learning about others, but I’m learning as much about me–how I react to things and how I can and cannot help people,” she muses. “I used to be really tense and nervous going into arranged situations like this, but now I’ve learned that I’m capable of helping people and being a positive presence.”

Currently, Peyser is mediating two cases: a petty theft and a grand theft. Her job is to listen and use questions to help guide the parties involved toward some kind of mutually agreed-upon resolution. “I don’t make suggestions. I’m trying to help them open a window,” she explains. “I can see possibilities, but they’re going to have to resolve things. I’m very curious how it’s going to work out.

“There’s no stereotype to help you understand anyone. Everyone communicates differently–it’s the utmost in diversity,” she adds.

Merriss agrees. “Even within our white, middle-class culture, there are many subcultures or mindsets,” he says.

In some instances, Merriss selects the cases to be handled by the reconciliation program, but most are referred by the Sonoma County Juvenile Probation Department. “We’re averaging 12 or 13 cases a month and looking to increase that to 20,” says Merriss.

Crimes that become candidates for mediation–mostly misdemeanors, but also some felonies–run the gamut from violent assault and battery cases to vandalism and petty theft. The youngest offender to go through the program was 8 years old, the oldest 17.

The mediation takes place in a neutral location, such as the RECOURSE office, a bank community room, or at the county courthouse. The victim and the offender work together to arrive at some kind of agreement, which could take the form of restitution, community service, or simply an apology.

“We’ll do a written agreement and they’ll sign it,” explains Merriss. “If there’s restitution, we’ll do it there. If it’s a larger amount, we’ll do a payment schedule. If it’s community service, it can be of the victim’s or offender’s own design. Sometimes the offender will do work at the victim’s property.”

Merriss says youthful offenders can, in talking with their victims and hearing their reaction, often realize the real harm caused. “In the ordinary juvenile-justice system, they might not make that connection,” he observes.

The program is not without flaws. In a case completed last year, involving a 17-year-old Petaluma boy who shot out the window of a parked vehicle with a BB gun, both the offender’s family and the victim say they’re pleased with the mediation process, but each has gripes about the outcome.

After going through mediation, the juvenile offender agreed to pay about $200 to repair the car damage, and complete 20 hours of community service. His mother says the punishment was extreme.

“I think the [mediation] program is good, but the downside is when a person realizes the alternative is someone going to court and spending money on attorney’s fees–and they think they can take advantage of it and make them pay more than they should,” she explains. “I thought it was a bit much–it was the money he was setting aside for driving school.”

The 49-year-old victim, who calls the offense “no laughing matter,” says she’s now frustrated because the teen didn’t complete the 20 hours of service stipulated by the agreement. “My recommendation to improve the [mediation] program would be to follow up to see the agreement has been fulfilled, because if you let down on that end, it’s been a waste,” she says.

Merriss agrees there have been problems in the past because there were no resources for tracking offenders and no means to follow up on the referrals. The state Office of Criminal Justice Planning recently awarded the offender-victim reconciliation program an Alternatives to Incarceration Challenge grant of $102,380. Sonoma County was one of only three counties in the state selected to receive these grants, and Merriss is hoping the funds will provide increased follow-up of individual cases.

The Parent-Teen Reconciliation Training will take place Friday through Sunday, Nov. 14-16, at the Santa Rosa Training Facility at Los Guilicos on Pythian Road in Santa Rosa. For more information, call 579-7928.