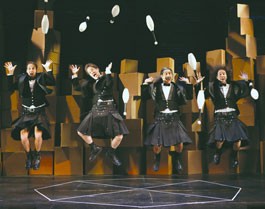 What began as a Sunday school teacher-training program soon became the nation’s first mail-order educational system. What was started to give people living far from the city a taste of the higher mind grew into an annual cultural staple. What prompted earnest young women in gloves to discuss opera now deeply includes accordion strains and burlesque girls. What all of this is, of course, is Chautauqua.

Founded in the late 1800s in upstate New York, on a 700-acre spread that now bears its name and offers year-round cultural enrichment, Chautauqua also gives its name to traveling shows, cultural training on wheels that still comes to give communities a taste of something, if not exactly the higher mind.

While the Occidental Arts and Education Center hosts an annual Chatauqua of its own design, Point Reyes Station and Sebastopol welcome the tomfoolery and the teaching when the New Old Time Chautauqua stops in those towns on June 23 and 26, respectively. Composed of a morphing group that could include some 60 individuals, the New Old Time members live in an intentional community and devote their summers to arriving in small towns—announcing their presence first with a parade down Main Street—and then spending the rest of the day performing acrobatics and giving free workshops on circus arts before retiring to a local theater for a full-scale vaudeville show. This year, the Flying Karamazov Brothers (above) accompany with the greatest of ease.