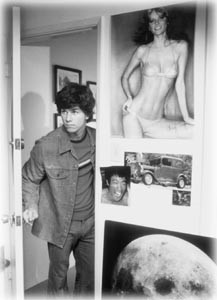 Crime novelist Richard Rayner does the hustle with ‘Boogie Nights’

OUTSIDE THE LOBBY window of this downtown San Francisco hotel, an elderly woman, entirely toothless, is grinning widely at passersby, displaying a tattered slice of cardboard with the words “Singing Lessons $10 hour.” She sits on the step of a church, 20 feet from a notice board claiming “All Are Welcome,” and another sign–on the church door–reading “No Trespassing.”

As I stand observing this striking tableau, with its odd juxtaposition of themes, I notice a tall, thin, jacketed fellow sprinting down the sidewalk in my direction. I glance down at the novel in my hand, Murder Book (Houghton Mifflin, $25), by Richard Rayner. I open to the back flap displaying the author’s photograph, then glance back to the sprinter, now almost at the door of the hotel. It’s him.

“So sorry I’m late,” he gasps amiably, his English accent making itself known between gulps of air. A few moments later, we are seated in a nearby coffee shop, discussing the surprisingly popular new film Boogie Nights (starring Mark Wahlberg, Julianne Moore, and Burt Reynolds), a fascinating look at the underground world of pornographic filmmaking in Los Angeles in the ’70s and ’80s. Rayner loves the film, calling it “a great big epic played out in a world of sleaze.”

A one-time Cambridge philosophy major who minored in theft before turning to a life of crime fiction, he is the author of the darkly funny Los Angeles Without a Map (soon to be a major motion picture) and The Blue Suit, a graceful, clear-sighted memoir of his criminal past.

Murder Book, which he is in San Francisco promoting, is an example of the best of the neo-noir genre, a fiercely funny tale of a homicide cop, Billy McGrath, attempting to kill two birds with one stone–framing a confessed murderer for a second crime he did not commit in order to collect a bounty hunter’s fee from the victim’s son–a stone that quickly grows so heavy that McGrath is nearly crushed by its weight.

Of particular interest to Rayner is Boogie Nights‘ setting–Los Angeles, the city in which he now resides–and the film’s gleefully noirish structure. He has long held that film noir is a genre specific to L.A.

“Absolutely. It’s this thing about Los Angeles being the city-as-labyrinth,” he explains. “The surface of the city looks all the same, and then as you weave your way through the cracks you find these fascinating subcultural worlds. It’s a maze that you journey through looking for yourself. That’s what the noir story is. Noir isn’t suits and guns and falling rain; it’s people striving to understand something they’re not going to be able to understand. The classic noir hero is someone who’s good, but not good enough.

“In Murder Book, Billy is a good man who for complicated reasons is doing a bad thing, and he knows it, and then has to accept the consequences of the way that plays out. It’s a moral predicament. I think that the way Boogie Nights struck a nerve for me was that it turned out to be a highly moral film about an immoral world.”

I ask Rayner if he thinks that such stories, with their charismatic heroes finding elaborate ways to justify their ambiguous moral choices, are contributing to our culture’s gradual moral erosion, as some have claimed.

“Oh shit, I hope not,” he says seriously. “That is a crucial question about all fiction, though, isn’t it?

“I was reading at a bookstore the other night,” he relates. “There was a mother who’d brought her little girl, and I was reading this bit with Billy telling the story of the worst crime he’d ever seen–which is a true story, incidentally, told to me by one of the investigators at the L.A. coroner’s office–and I was reading this thing, thinking, ‘Oh, Jesus! What on earth made me write this story so unbelievably dark? And what is that mother thinking? What’s the child thinking?’

“On the subject of artistic responsibility,” he says, lowering his voice for the first time, “I was very taken, when I was a kid, when I read this novel by an English writer named Piers Paul Read, called The Upstart. It was about a guy who had a background similar to my own–slightly disenfranchised, middle-class, weird family history, went to public school where he felt an outsider, went to Cambridge–and he became a criminal, which is exactly what I then did while at university.

“That book influenced my choices. In some odd way I had taken completely the wrong thing from The Upstart. But I must say I think these things can only influence us if they are layered on top of some sort of potential that is already there inside us.” He pauses.

“That’s the dangerous thing about stories,” he muses. “To go back to the labyrinth thing, they take you into a maze, and in the end, there is only one way out. You have to make these choices the whole time. And any fiction, within the choices it makes, might speak to someone in the wrong way. Is Boogie Nights going to speak to certain people in the wrong way? Certainly. Is it therefore an immoral film? Absolutely not.

“Quite a dilemma for a moral person,” he shrugs. “Isn’t it?”