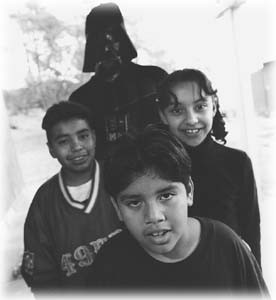 3 kids get first taste of the big screen

Writer David Templeton takes interesting people to interesting movies in his ongoing quest for the ultimate post-film conversation. In this–his 100th such movie-house colloquy–he takes a trio of young first-time theatergoers to see the remastered edition of Star Wars.

LIKE MOST other American kids, Mario Altamirano, Brenda Ochoa, and Carlos Altamirano, (ages 9, 10, and 11, respectively) have watched plenty of television. They have seen countless videos, can name all the films of Arnold Schwarzenegger, and know the plots of classic Disney cartoons.

Asked if they like movies, each one exclaims, “I love movies!”

But until today, at this matinee screening of the newly re-released (compliments of Healdsburg’s Raven Theater), neither Brenda nor Carlos nor Mario has ever experienced a movie in a real movie theater.

Born in Mexico, each of my guests this afternoon immigrated to the United States when they were much younger, and have grown up speaking both English and Spanish. Their lack of movie-house experience is due mainly to the economic priorities of their parents.

“Can we sit in the front row?” Carlos asks, after we’ve been ceremoniously welcomed and ushered in by the theater’s manager. The front row it is.

Clutching popcorn and sodas, Brenda giggles in anticipation of Star Wars (arguably the ultimate big-screen film) while Carlos tries to locate the projector room and Mario theorizes about which way the velvet curtains will open and what color the screen will be.

The curtains part from the middle, the screen is a shimmering silver, and the show begins.

“I stopped breathing,” Brenda whispers as the end credits roll to the thunderous John Williams score. “I kept forgetting it was a movie. It was so big I thought it was happening to me!”

“Is it always so loud?” Carlos asks. “If the TV at home was that loud, I think the furniture would be jumping all over the place.”

On the drive to a nearby restaurant for lunch, the car is full of high-decibel, well-imitated sounds of lasers, droids, wookies, and Darth Vader’s ominous breathing noise.

“I like Darth,” Carlos says a few moments later, as we all take a seat at the table, “because he can get into people’s minds from far away. He was like the dark side of Superman.”

“I liked when they blew up the Death Star,” Mario chimes in.

“Whenever something blew up it made my stomach feel funny.” Brenda adds. “It kind of tickled.”

“Was this movie on TV a few weeks ago?” Carlos asks. Yes, I reply, I think that it was.

“I can’t believe this,” he groans. “I was going through the channels and I saw the part where Darth and Obi Wan were fighting. But I didn’t know what it was. I thought it was Star Trek or something. I thought it looked boring, so I turned it off.” He slaps his forehead, as everyone else grimaces in sympathy.

When Brenda remarks that she liked Princess Leia, Carlos says, “She was cool. Her hair looked like horns.”

“She was pretty,” Brenda continues. “And she had talent.”

“It surprised me that she was wearing lipstick,” Mario grins. “I didn’t know they had that in space!”

Having learned that Carlos likes Darth and Brenda likes Leia, I ask Mario to name his favorite character.

“Probably Luke, because he trusted people,” he says. “But I liked C3PO because he would translate for the other robots.”

“That robot can speak 1,000 languages,” adds Carlos, noticeably impressed. “I don’t think there even are a thousand languages. Not on Earth.”

“Spanish, English, French,” Mario lists out loud, counting them off on his fingers.

“And all the American Indian languages,” Carlos says. “That robot probably knows all of them.”

He suddenly laughs, holding his stomach, and says, “When the movie was over, I felt really dizzy. Does that happen all the time?”

I suggest that perhaps his dizziness came from sitting so close to the screen.

“Really?” Brenda asks. “Then I want to sit in the front row every time!”

From the February 20-26, 1997 issue of the Sonoma County Independent