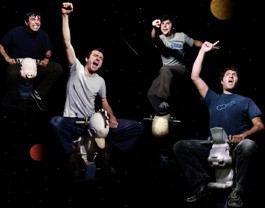 Taking It on the Shins

Indie-pop darlings join the bouncy with the baneful

Give up any Garden State allusions. While the Shins’ newest disc, Wincing the Night Away–the quartet’s first release since 2003’s exceptional Chutes Too Narrow–shows their infectious ’60s pop sensibilities to be intact, it is musically and lyrically dampened by Portland rain clouds.

“Sleeping Lessons” kicks the record off with a circular, flashback-ready vibraphone that reaches its unrelenting, guitar-throbbing zenith with the band sounding more epic than ever before. “Those unrepenting buzzards want your life,” warns singer-songwriter James Mercer, possibly exorcising demons of new success.

But just when you think the Shins have gone arena rock, they jump just shy of the four-minute mark into “Australia,” another hooky, jangly gem culled from their bottomless well of criminally catchy numbers. “Your shape on the dance floor will have me thinking such filth I’ll gouge my eyes,” Mercer coos in his characteristically sweet, sighing falsetto, an image foreshadowing the album’s noticeably darker hues that continue with the caustic Dick Dale digression “Pam Berry.”

“Sea Legs” confirms the Shins’ place in the shadows, with a downtrodden club beat, flamenco-inflected guitar, and airy strings and flutes that evoke mid-’80s Cure. Spewing grotesque, gothic imagery (“the dead moon,” “a cheerless pyre”), Mercer holds his fluttery voice in mid-pitch, with the band finally straying from their melodious home to dwell in the darkness a bit.

Wincing proceeds to seesaw in similar fashion, from the warm and fuzzy “Turn on Me” to the ghostly “Black Wave,” a plane crash narrative which turns their quirky, reverb-shrouded lo-fi muffles spooky. This newfound contrast accentuates each song’s individual potency and spotlights the Shins’ expert celebration of influences through their own identity. They even emulate the Jesus and Mary Chain on the single “Phantom Limb.” With steady drumming and shimmering chord strums recalling “Just Like Honey,” the song’s embellishing fuzz is tastefully limited to the pulsing bass, allowing the scrumptious melody and floating chorus to be paramount.

The Dude Is Nuts