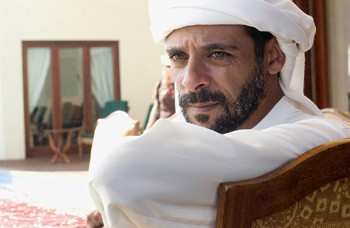 Blood for Oil: Alexander Siddig thickens the plot in ‘Syriana.’

‘Syriana’ may have too much going on for mainstream audiences

Sometimes, especially in this Oscar-friendly time of year, a film comes along that challenges potential viewers with a resounding “Good luck trying to figure me out.” But in looking at previews and advance reviews, one question usually stands out: Is it worth it? Should audiences take the challenge and bother trying to untangle the numerous, abundantly knotted threads of plot? Syriana, the latest picture from writer (and now director) Stephan Gaghan (Traffic), is one of these films.

This anything-but-taut political thriller takes a set-up similar to Traffic–several plot lines exposing various levels of a global topic–and moves the stage from the war on drugs to the war over oil. You’ve got your stoic career CIA man (George Clooney), a hotshot energy analyst (Matt Damon), an up-and-coming corporate lawyer (Jeffrey Wright, one of the most underrated actors working today) and an impressionable Pakistani teen (Mazhar Munir).

Even beyond its several-plot-line structure, the film is rife with similarities to Traffic; if it weren’t made by the same person, it would probably be branded a low-rent rip-off of the 2000 hit. But Gaghan is simply not the expert that Traffic director Steven Soderbergh is. (Soderbergh produces this time around.) There are a few picturesque visuals, but the film is otherwise devoid of anything exceptional when it comes to photography. The editing, though admirable for the expert way it juggles these four major plot lines, is likewise nothing flashy or notable.

Gaghan’s screenplay does manage to get a lot done in its 126 minutes; there are broad themes mixed with intense scenes of personal interaction, as well as endless piles of necessary exposition delivered quite deftly. And the topic itself is unexplored territory, a unique and current subject for audiences with a lot to learn about the seedier side of the world we live in.

But there is also a heavy confusion that hangs over the film, one that will undoubtedly keep it from being considered any sort of mainstream success. Syriana is simply too obscure, too hard to wrap one’s head around and fully understand how it all went down. I won’t spoil any of the film by revealing what specific questions I had, but suffice it to say there is a whole lot of “Who did what to whom just now? Did X just finger Y as a conspirator in Z?” Far too much for any box-office hit, that’s for sure.

Despite underwhelming direction and a sometimes overly complex screenplay, one thing does make this film worthy of viewing by any true cinephile: the acting, across the board, is remarkable. Instead of getting just one or maybe two of the most exceptional performances of the year, Syriana manages to net a handful. Clooney (putting on a thick beard and 30-plus pounds of excess flab for his role) is a sobering and commanding presence, refreshingly devoid of the charismatic actor’s usual showmanship.

Damon flexes acting muscles he probably never knew he had as his character wrestles with powerful decisions and actions. Wright is, as always, a chameleon, melting into his role to the point where it wouldn’t matter if he was a star in the real world, you’d still think of nothing but his character Bennett Holiday whenever he was onscreen.

In the smaller roles, Chris Cooper borrows some of his recent macho Jarhead bravura to play a loud corporate tycoon, while Tim Blake Nelson gives the speech of the film as slimy oil man Danny Dalton. Even Amanda Peet as Damon’s wife wails convincingly when enduring a tremendous tragedy.

With a stellar cast and pertinent subject matter helping the film to rise above its own shortcomings, there is a lot to glean from Syriana, if the viewer is keen on it. But with more escapist fare like Narnia and King Kong opening right after it, the bad news for Gaghan and Warner Bros. looks to be that few patrons will be willing to educate–and confuse–themselves about the complex politics of oil. To pose the question once again, is it worth it? It should be, but alas, for John Q. Public, it probably won’t be.