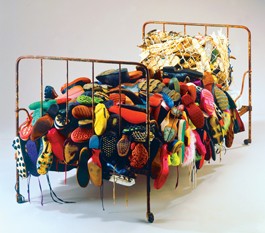 Livia Stein arrived before the opening of her shared art exhibit “Love and Pleasure” at Art Works Downtown in San Rafael wearing a vintage gold-and-gray striped dress, green tights and a row of clanking bracelets on each wrist. “I’m the 2-D person,” she announced, gesturing to the colorfully layered paintings and prints on the wall.

Throughout the gallery stood found object sculptures made by Stein’s friend and fellow artist Susan Danis, who arrived minutes later with her own clanking wrist ornaments and fuchsia ensemble. The colorful duo’s current show, “Love and Pleasure,” runs through June 17, and viewers’ only expectations should be for the unexpected. “We do stuff that’s kind of far out there,” Danis says. “It’s just absurd to think everyone’s going to like it.”

Both Danis and Stein share a penchant for eccentric fashion, bright colors and candid discourse, though their delivery is unique: Stein is the pragmatist; Danis, the fantasist. Stein’s work is color, imagery—brushstrokes fixed to canvas; Danis’ sculptures seem to have their own gravity, as if they had spontaneously materialized with objects pulled from their resting place into piles and spheres.

Stein motions toward a metal net full of fist-sized jewels that hangs at the front of the gallery. Danis wove the net in which the jewels rest, but it’s easy to overlook the craftsmanship, simply because it’s very precise. Many of her pieces incorporate woven structures, such as a pillow full of bones, coral, dentures and God knows what else—and a giant human hairball (six months’ worth of floor trimmings from Supercuts)—ensconced in a wire sphere.

Hung side by side, their works play like a conversation between old friends, each alternately playful then dark, witty and then flippantly dismissive of convention. One gets the feeling from Stein’s work that painted lines must continue off canvas and onto the wall of her studio, where she’s still coloring outside the lines.

“I decided a long time ago,” Stein says, “that there’s no waiting for something called a muse—the muse never comes.”

Despite their cheerful palette, Stein’s paintings have dark undertones. A series on flight, for example, features abstractions of military planes and helicopters, splatters of red pigment, and as such are vaguely hostile. Her own self-portrait depicts a frowning woman, which she attributes to staring in the mirror too long.

“A lot of people don’t see the mixed messages in my work,” Stein says, “and if they don’t see it, I don’t break their hearts and tell them.”

Stein recently bought for Danis a taxidermied goat as a gift. A strange gift, yes—the type of gift she didn’t know she wanted until she got it. The goat, it turns out, is a perfect metaphor for their show: it’s an unusual offering that inspires the viewer, when perhaps the viewer didn’t even know she wanted to be inspired.