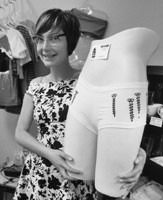 There’s nothing like a handmade garment, and when it comes to the local arts and fashion community, Moxie store owner Martina Schnitzler is unabashedly supportive of those who create unique, hand-stitched designs. The first thing one notices upon entering her three-year-old store is an array of locally crafted handmade clothing and accessories, and it’s clearly what makes Schnitzler most proud.

As a result, Moxie has become the place to go for the hippest and most eye-catching original designs, completely handcrafted and consigned by local artists. Here’s a sampling of just some of the North Bay designers you’ll find on Moxie’s racks.

Evil Sewing Machine “Our mission is to give worth to the outcast,” reads the tag. “Each piece has been carefully chosen and restyled to reflect our values: rejection of pop culture, conformity and the degradation of individuality.” Noah Lennox, whose words speak in part for custom designers everywhere, approaches old clothes and sews new fabric into them.

As an example of subtle nuance creating a much greater effect, Lennox reconstructs a standard men’s dress shirt into a work of art by merely adding new, patterned fabric to the collar and pocket fringe. Like a Clarence Clemons solo, it’s not much, but it’s just what’s needed. “Noah owns a drapery company,” explains Schnitzler, “and he’s been sewing his whole life.” Price point: shirts, $16-$29.

Evo Noche When Evo Noche’s Erin Brookey and Jason Roeder moved to Santa Rosa last year, it sent an understandable twittering through the music community: Roeder is the drummer and founding member of Neurosis, the legendary forefathers of ornate metal. Given Roeder’s complex musical output, it’s a curiosity that Evo Noche’s designs are so simple; Brookey’s images, screenprinted by Roeder, feature line-drawn, repeated images of such items as keys, screws and flowers. A lack of flash highlights the tasteful placement, and the juxtaposition of tools on clothes is a head-turner. “I love them,” says Schnitzler, “I want them to be part of everything.” Price point: underwear, $13; nightgowns, $25; napkins, $8.50.

Junket Designs sewn onto fabric became popular in the 1970s with the flourishing of the embroidered denim shirt, often created from a pattern of butterflies and sunsets. Junket picks up the trend, but the stitching here is entirely one-of-a-kind, and Theresa Calabrese’s sharp-looking designs are refined, deliberate and symmetrical, with only a stray zigzag stitch here and there to let you know it’s handmade.

Occasionally, Calabrese will throw in an image of, say, a flock of doves flying across the garment, but crisp, modern accents seem to be her forte. “Currently, she’s only doing skirts,” says Schnitzler, “but I think she’s really creative, and she’ll come up with some more stuff.” Price point: skirts, $40-$45.

Robot Cat “She just has this great imagination,” says Schnitzler of Robot Cat’s Violet Crabtree. “Her style is so unique, you would never find anything else that would be the same.” Crabtree, who submits a cartoon in this week’s Bohemian, fuses daring design choices with active, childlike images. One multilayered shirt depicts a house with windows, lace curtains and people inside; on the back is “a kitty on the roof,” indicated by the handwritten tag.

Numerous Napoleon Dynamite-esque designs include a T. rex preparing to squash a car flat, a flailing pterodactyl and a horned Sasquatch beast. Robot Cat holds the distinction of producing Moxie’s most popular design, an anatomically drawn ribcage and heart, stitched to the shirt front. Schnitzler sells them like hotcakes: “One lady was, like, ‘I had open-heart surgery a year ago, and this shirt really means a lot to me, because this happened to me!'” Price point: skirts, $34-$40; shirts, $29-$38.

Jared Powell Powell’s paint-stenciled handbags made waves locally before being picked up last year by a national distributor. Now they can be seen on the streets of New York and in the nightclubs of Hollywood, and they’re also one of Moxie’s biggest sellers. There’s no telling what will come out of Powell’s studio next. His day job as a tattoo artist keeps his creative juices flowing at all times, and he has proven himself adept at just about every medium. “Jared is one of the most amazing artists in Santa Rosa,” pronounces Schnitzler. “I’m so proud of him for the effort and work that he puts into his life.” Price point: handbags, $40.

Moxie has recently relocated to a larger space, and is always open to new designers. Of the appeal of custom fashion, Schnitzler says, “I think that people are looking for something to help express their individuality in this world we live in. Everyone’s so used to wearing jeans and T-shirts and shopping at Old Navy or Target–it’s like, they want something different. They want to be different, they want to stand out.