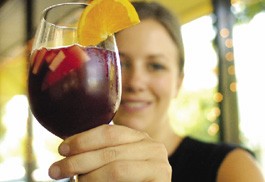 We here in the North Bay are certainly no strangers to wine. But drinking wine has spread far beyond the confines of the tasting rooms, with those of all ages and backgrounds becoming do-it-yourself connoisseurs. Wine bars are quickly becoming the new coffee shops, where throngs of twenty- and thirty-somethings congregate to strip the fermented potion of its pompous, pretentious association.

Wine bars are most closely associated with enotecas, the Italian establishments that date back to ancient Rome, where people would chat and enjoy snacks while drinking together. But a look at some local bars proves that the one thing on which the world is united is the youthful pursuit of grapes and gab.

San Rafael’s Sabor of Spain (1301 Fourth St., San Rafael; 415.717.7410; www.saborofspain.com) was born of a woman’s frustrated longing for a piece of home. “I used to work for wine clubs in Spain, and I always sold the Italian and French restaurants all their wines and California wine,” says Spanish-born co-owner Maika Llorens. “I always thought, ‘Why doesn’t something from Spain exist?'”

Llorens decided to create it herself, modeling Sabor of Spain after traditional vinotecas. “A vinoteca is a high-end place where you have an extended selection of wine with tapas,” she says. “I hear many comments from our customers that just came back from Spain, and they say this is the closest thing they’ve seen.”

Of course, social interaction is paramount in any wine bar, and Sabor of Spain rises to the challenge with a few long, cafeteria-style tables that serve as communal tasting centers. The front patio section allows the good cheer to spread to the rest of Fourth Street. “It was one of my dreams to have what is called terrazas,” Llorens says. “You sit outside, have a drink and look at the people going around–it’s like an outdoor bar.”

Decided by friendly consensus, of course, is the extensive Spanish-only wine list, currently boasting over 170 different offerings, typically ranging from $6 to $10 by the glass. Though it possesses the most acreage of any country devoted to vineyards, according to Llorens, Spain still flies below the radar of most wine connoisseurs. Howeer, Llorens feels strongly that Spain wine will be a strong contender in the U.S. wine market. “They have an amazing value,” she says. “Things for $50 or $60 per bottle you can find here for $15 to $20.” This is due, she feels, to the lack of publicity for Spanish wines, but Sabor of Spain may be on the cusp of a new movement. “[Wine critic] Robert Parker is saying that Spain is the next star,” Llorens says proudly.

The wine bar trend has proven profitable for other restaurateurs like Yoshi Tome, owner of Sausalito’s Sushi Ran (107 Caledonia St., Sausalito; 415.332.3620; www.sushiran.com). Five years ago, Tome opened a wine and sake bar next door to his Japanese and Pacific cuisine restaurant, a Sausalito landmark now in its 20th year. Like Llorens, Tome looked to his homeland for inspiration, in this case, his native Japan’s izakyas, low-key, country-style bars. “In Japan, a lot of people after work, with co-workers, just go up there to eat, drink and have fun,” he says. The kappos, which feature high-end cuisine, also appealed to Tome. “I wanted to do a combination of the two,” he says.

The result is an elegant, comfortable hybrid that seems tailor-made for Marin County, and recently prompted Wine Spectator magazine to honor the restaurant with its Unique Distinction award. Most unique are the 40-plus different types of seasonal sake, ranging in price from $7 to $22 per glass and from $18 to $200 per bottle.

Sushi Ran’s wine list has a startling omission, though. “I don’t have any Japanese wine,” Tome says. The impressive list mostly champions uncommon selections from nations as diverse as France and South Africa. “We try to find very rare wines and small producers,” he explains. “You’re not going to find them at any grocery store.”

The ever-increasing pace of modern living is another factor in the success of Sushi Ran, which has benefited greatly from its close proximity to Sausalito’s Century CinÈArts movie theater. “It’s convenient before the movie to have a glass of wine, and after the movie, a glass of sake, bite to eat, whatever you’d like to do,” Tome says. “The older style of dining is dying.”

While this may be true, wine bars are immortal. While late to the trend that has thrived in some countries for centuries, the United States is finally catching on quickly, with places that re-create classic auras or present exciting new variations to social sipping. Never has the American dream been so intoxicating.

The Bounty Hunter combines a wine bar, bistro and wine shop to provide an effective all-purpose stop in downtown Napa. With the 40 affordable wines to taste (not to mention some 400 by the bottle) and the hearty chicken and ribs and the ubiquitous saddles, the Bounty Hunter could be the most American yet of wine bar establishments. 975 First St., Napa. 800.943.9463.

Cork has been receiving rave reviews since it opened in Sausalito a year ago. Styled after a traditional Italian enoteca, the restaurant offers toasted sandwiches and more wine choices than you can fathom in a casual, open setting. 317 Johnson St. at Bridgeway, Sausalito. 415.332.2975.

Sooze Wine Bar Cafe is a Petaluma favorite that is a perfectly named combination of quick dining options. With plates large and small and a small but informative wine list, Sooze is a perfect introduction to the wine bar lifestyle. 6 Petaluma Blvd. N., Petaluma. 707.762.3743.

Willi’s Wine Bar may share the name of the famous Paris establishment, but its small-plate menu extends far beyond French cuisine to include many Asian and Mediterranean dishes. The extensive wine list provides a perfect companion for whatever decision you make. 4404 Old Redwood Hwy., just past Cardinal Newman High School, Santa Rosa. 707.526.3096.

Wine Spectrum Shop & Bar has occupied more than its share of space in these pages lately, but that doesn’t mean it shouldn’t join this list. Opened just last month in Railroad Square, this is the retail outlet of successful wine brokers, offering libations not to be found elsewhere and an intriguing tapas menu. 123 Fourth St., Santa Rosa. 707.636.1064.