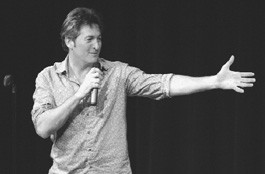 Laughable opportunities in the North Bay

On Mill Valley’s Throckmorton Avenue, nocturnal noise usually emanates from the Sweetwater Saloon. On Halloween night, however, the theater across the street had roars of laughter to rival the rock of the nightclub. Comedian Mark Pitta was onstage, dressed in a whoopee cushion, singing “Summer Wind” and trying to hold back the laughter bursting through his mile-wide boyish smile. Maybe it was the short trek the costumed, jewelry-rattling crowd made to the show, or the ease with which they interacted with the performers, or even Pitta’s own mother charmingly stealing the show from magician Jay Alexander during a card trick, but this night of entertainment felt more like an uproarious anniversary party than a night out at a comedy club.

Such is the down-home vibe at Mark Pitta and Friends, a Tuesday night showcase of headliners and local up-and-comers that’s entering its third year this month. Since its inception, Pitta’s gig has been the talk of the town, mostly for its impressive list of stellar surprise guests, from Richard Lewis to local heroes like Dana Carvey and Robin Williams.

“My original idea was to provide a place for new comics in the Bay Area to work, so they could get better,” Pitta explains, taking a seat at a Larkspur restaurant the day after his marathon Halloween gig. The Mill Valley resident and former KTVU personality cut his teeth in the early ’80s San Francisco comedy scene. “I had so many places to work when I got started. The scene back then was very competitive, but also nurturing. That’s what I was trying to create.”

Pitta seems to have accomplished just that, having featured over 900 comics in the last two years, all of whom seem more comfortable at the 142 Throckmorton than in regular clubs. “It’s like a home to me,” Pitta says. “I’m one of them.”

In fact, a thrilling spontaneity pervades everything about the show, including its lineup, which is never announced beforehand. “The lineup is finalized a few weeks before, but may change right up until the day of the show,” says theater owner Lucy Mercer. Pitta confirms this.

“I don’t know Robin Williams is in the show until he’s in the green room,” he says.

The big names themselves relish the casual, open-door policy that allows them to try out new material on a warm, relatively progressive crowd. “Richard Lewis could not stop raving about how great it was to perform in a theater for smart people,” Pitta says. The show has also proved therapeutic for comics like Johnny Steele, who recently hit up the 142 after a weeklong stint at San Francisco’s Cobb’s Comedy Club playing to what he called “rodeo, frat-party, cage-match crowds.”

“I don’t need to headline or anything,” the comic e-mailed Pitta. “I’d just like to wash the stink off by performing in front of human beings for a change.”

The physical setting is decidedly elegant. The former vaudevillian theater first opened in 1910 and hosted Charlie Chaplin himself. “It’s not a comedy club; it’s a theater that has comedy,” reminds Pitta. With no drink minimum and a regal air, the 250-seat Throckmorton is a far cry from the chicken wings and cramped round tables of regular comedy clubs. “It’s 15 bucks. You don’t have to drink; you don’t have to do anything but see the show,” he says.

One person inspired by the show was comedian Ross Turner, who just hosted his second Comedy Workout at the Larkspur Cafe Theatre, a cozy, barnlike venue. “No originality here,” Turner told the crowd in his stuttering, Woody Allen-esque delivery. “It’s the same concept [as Mark Pitta and Friends], except you don’t get Robin Williams.”

Although it chiefly books jazz and roots-music acts, the Larkspur Cafe has more comedy shows in the works. “I think local comedy, with Mark Pitta keying it in with 142, has been a great thing,” says manager and operator Daniel Patrick. “People need more comedy in their lives.”

A former Santa Rosa resident, Turner, who himself has often appeared in Pitta’s lineup, laments the decline in North Bay comedy venues. He seeks to fill that void with his show, the last of which featured San Francisco’s Will Franken, whose outrageous, avant-garde, character-shifting act brought down the house–especially his skit in which John Milton’s recitation of his own Paradise Lost scores very low in a modern-day poetry slam.

Like Pitta’s show, the smaller-scale Comedy Workout is privy to unpredictable scheduling. “Four days ago, I changed my entire lineup,” Turner says, referring to Franken’s last minute stand-in. “I said, ‘You know what, Marin? Watch this.'”

Turner wants his showcase to be a training ground for local talent, albeit a lesser established type than at the Throckmorton. “They have to be experienced, they’ve got to be hot,” he says, “but they’ve just got to be unknown.” Although celebrating eclecticism in his lineups, which are adult in content, Turner, like Pitta, is weary of comics who lack depth behind the dirty words. “It’s too easy to get a laugh dropping an f-bomb,” he says. “If you can get a laugh and not curse, you’re doing a slightly better job, you’re a little more skilled.”

Turner believes convenience is a huge factor in making North Bay comedy a hit. “You know what it would cost you to see these comics in the city? I’m going to bring you the same comics and you can stay close to home,” he says. “People are thrilled that comedy is happening in their back yard now, and they’ve got choices. They’ve got Pitta, they’ve got Turner and they’ve got Campo, and we’re all doing something a little bit different.”

The Campo in question is Deb Campo, creator and host of Comedy Slam at Sam’s, held each Thursday night at Sam’s Anchor Cafe in Tiburon. “I really like bringing the comedy scene to the North Bay,” she says. “There are relatively no consistent venues up here.” Again, the local audience is a treat for comedians. “The crowds are savvy, smart, diverse and ready to be entertained,” she says.

Although only a professional comedian for about two years–an extreme beginner by standup comedy standards–Campo’s a hit with her brutally honest accounts of middle-aged, single-mom life. “Women are primarily my biggest fans, but, honestly, men get a kick out of me, too,” Campo says. “I’m letting them in on the private world we women live in and talk about amongst ourselves. I’m fearless up there and will approach any subject, although I rarely curse. It takes away from the funny.”

One person who is not ashamed of working blue is Lonnie Bruhn, a disabled comedian who brings his Cripple XXX comedy tour to Petaluma’s Mystic Theatre on Nov. 11. “It’s sort of like the Blue Collar Comedy tour with a limp,” Bruhn says. “We’re filthy so you don’t have to be–and the parking up front is taken.” Born with cerebral palsy and prone to serious accidents because of damaged knees, Bruhn finds solace from his ailments in the world of comedy. “People who are disabled love my show, because I am the first to really come along and tell it like it is,” he says. “It’s their relatives and friends who get offended. That really pisses me off, because it’s just their habit to feel sorry for them, but they don’t live it, and they never will understand.”

While one of the very few extremely filthy disabled comics working today, Bruhn feels his act shouldn’t be dismissed based on language alone. “Audiences aren’t looking for clean, dirty, politically correct or any other style of comedy,” he insists. “They want to see feeling behind the material, and if it’s funny and well-written, they’ll come back for more.”

While potentially offensive to countless groups, Bruhn feels the Bay Area is ready for his corrosive, painful brand of humor. “I think they’ll be very open minded,” he says, “not only because I feel the right demographic will be there, but also because the Bay Area is one of the oldest comedic markets and the art form is still respected.”

The Mystic has featured comedy events before, like their annual Will Durst and Friends event in December as well as hosting Johnny Steele and Pauly Shore, but owner Ken O’Donnell still sees it as an uphill battle. “The local response has been OK, but we have not done enough on a regular basis to get a following,” he says. “It’s a hard market, but one we would like to keep after.”

With more comedy tours arriving and more regular showcases popping up, North Bay comedy may be all right after all. Mark Pitta has even flirted with expanding his showcase to the Wells Fargo Center and to Napa.

“People say, ‘Why aren’t you bigger?’ Why aren’t you on TV?'” Pitta reports. “I almost take it as an insult, because what’s wrong with being great in the moment for a live audience?”

Judging from the hundreds of Marinites keeling over with laughter each week, absolutely nothing.