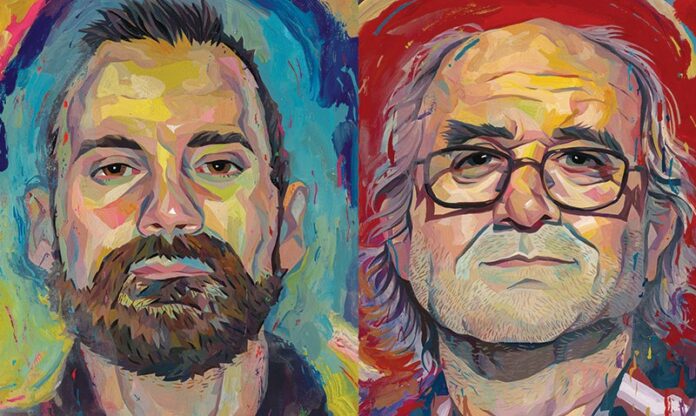 In its hundred-plus-year history, the stage of Petaluma’s Phoenix Theater has seen it all, from opera to vaudeville, to movies and rock concerts.

The stage of the venue and de facto community center is also the home of the “Onstage with Jim & Tom” video podcast, in which Phoenix Theater manager Tom Gaffey and concert booker-turned-board member Jim Agius invite local bands onstage for performances and interviews.

Usually, these events are recorded without an audience—until now. This weekend, “Onstage with Jim & Tom” celebrates its fifth anniversary with a live episode featuring Gaffey and Agius sharing stories about the venue and Petaluma for the crowd on Saturday, March 30.

“The event is special in that it won’t really reflect what the episodes are like now,” says Agius. “It’s going to be very similar to how the show started.”

Five years ago, “Onstage with Jim & Tom” was born out of Gaffey’s immeasurable wealth of knowledge of the theater and Petaluma’s history, as well as his personal stories about running the Phoenix since the 1980s.

“If you know him, you’ve heard these stories a hundred times,” says Agius of Gaffey. “But if you haven’t, it’s a real treat. The event is basically a greatest hits of Tom’s stories.”

Since first booking shows at the Phoenix in 2006, Agius has bonded with Gaffey over shared values, and the two hosts’ rapport on the show shines through.

“It’s funny that Tom does the show at all; he hates listening to himself being recorded,” laughs Agius.

“I have no idea how the finished product ends up—I can’t listen to myself,” says Gaffey. “I’m in it for the experience itself. It’s basically another aspect of what we do at the Phoenix, bringing all this young talent on and letting them play. That’s the really cool stuff for me.”

The podcast itself has evolved significantly, adding cameras to the originally audio-only format and including a wide swath of Bay Area bands and musicians in its interview and performance segments.

“It’s amazing how far we can get these bands to go in depth with their music and their material,” says Gaffey. “As far as posterity goes, it’ll be an incredible thing to have, a history of the Bay Area music scene.”

The upcoming live event, reportedly set to conclude with Gaffey leading a “Bohemian Rhapsody” sing-along, is also acting as a fundraiser for the Phoenix Theater, which is raising money for a sprinkler system that the city of Petaluma ordered to be installed. Having just completed construction on a new roof, and with century-old plumbing causing delays and increased costs, the theater’s needs for funds is at an all-time high.

“The Phoenix is extremely unique,” says Agius. “Having the space for people to not only express themselves, but also to congregate and meet like-minded individuals is incredibly important, and I think the world would be a better place if every town had a place like the Phoenix Theater.”