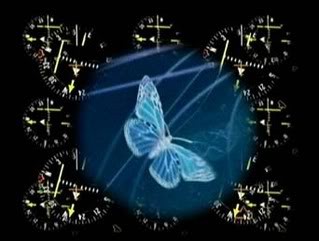 What if you put on one of the most exciting art exhibits in the North Bay and no one came? Aside from a handful of students and some of the artists themselves, that’s exactly what happened with Sonoma State University Art Gallery’s compelling new show, “Projected Image,” which opened Feb. 21.

Closing off the gallery spaces to outside light using heavy black curtains, curator Michael Schwager and exhibition coordinator Carla Stone have assembled a compelling selection of new media works concerned with how the projected image mixes with traditional art media and/or prompts fully-realized three-dimensional notions of its own.

The work of conceptual artist Paul Kos introduces the exhibit, his two paintings (Sierra Snowstorm, Drips and Drops) fluidly sluiced with pulsing light as though they were at the bottom of a sunlit creek bed or, indeed in a high Sierra snowstorm. Kos, a longtime instructor at the SF Art Institute, is known as a pioneer of Bay Area conceptual art who often appropriates technologies devised for industrial purposes into his artwork. His reworking of Chartres Cathedral (below) is one of the many pleasures of the di Rosa Preserve.

Around the corner are two installations by San Jose-based digital artist Jesus Aguilar, a recent MFA graduate who completed a full year as an artist-in-residence at the Headlands Center for the Arts, is interested in the collision of technology with our innate humanness. In one instance, he has done as we all have and Googled himself.

While some of us, say, have a doppelganger who loves to row, Aguilar’s namesakes include a Cuban boxer, a mathematician, personal trainer, a classical guitarist, and a death row prisoner. Aguilar was at the opening reception and said that his interest was piqued by the differences in his namesake’s lives and their sheer humanity.

His other piece in “Projected Image,”Dante’s Inferno in 8 Minutes 34 Seconds takes the entirety of Dante’s text and mashes it up upon itself. Aguilar purposefully chose a very narrative ancient work that is meaningful to him purposefully to chew through with a computer; the words that are revealed in the mash were photographed from the screen, making it just that more of a step away from human touch.

Also present at the opening was Jeanne C. Finley, whose collaborative effort with John MuseCatapult, uses old discarded windows found during their own residency at the Headlands Center and uses them to refract and tunnel the images of flight and water that they project on to them. (Other of their collaborative work is seen above, with the butterfly image.) “The windows are just perfect!” Finley told me. Why? Because of the old glass in them? “No,” she replied with a laugh. “Because they’re so dirty.”

Finley and Muse also scavenged a wrecked old chandelier from the Headlands and have that on a rotating motor so that it swings slowly from the ceiling behind the exhibit, which is physically composed of some 12 old glass windows hanging from the ceiling. It’s treacherous to navigate through, a point Finley concedes. That is, after all, part of the point of this work, which examines escape and constriction through a Victorian-style lens. The artists have taken “The Blue Danube” as a mix, overlaying several different performances of the song so that the sound is haunting and almost familiar, but difficult to place.

Other work in the show is contributed by Rebecca Bollinger whose suburban photos collected as Here to There is projected onto boxes that butts objects against each other in the unusual setting of 3-D “canvas,” and Tony Oursler ’s talking sculptural loop, Ligloc.“Projected Image” shows through March 16. See it. SSU Art Gallery, 1801 E. Cotati Ave., Rohnert Park. 707.664.2295.