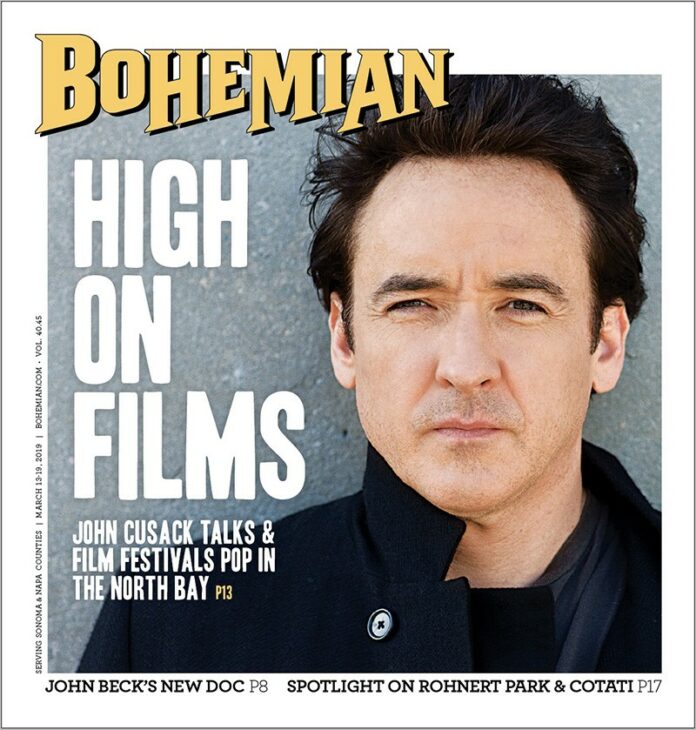 Film events and festivals bloom in the North Bay

With March well under way and spring around the corner, the clouds are starting to clear in the North Bay, meaning the stars are coming out to shine. From now through May, several of Hollywood’s top actors, emerging filmmakers, gifted documentarians and others will make their way to Sonoma and Marin for special screenings and festivals offering one-of-a-kind film experiences for local audiences.

First up, one of the most recognizable faces in movies for the last 30 years, John Cusack comes to Santa Rosa to screen and discuss his hit comedy High Fidelity on March 15 at the Luther Burbank Center for the Arts.

The story of record shop owner Rob Gordon (Cusack) recounting his top five failed relationships is set against a backdrop of over 70 pop songs spanning multiple decades and genres of music; the film has become one of the most beloved romantic comedies for music and film lovers alike. Cusack not only starred in the movie, he co-wrote and co-produced it, bringing the novel by Nick Hornby to life.

“I had made a bunch of films with Joe Roth, who ran Disney,” says Cusack. “And I had just made the first film I wrote and produced called Grosse Pointe Blank. We had a really good experience, and we had a big soundtrack on that movie. Kathy Nelson, who was the music supervisor, was a real wizard.”

After the success of Grosse Pointe Blank, Cusack turned to High Fidelity and brought Nelson along for another music-centric film. But this time, the music took on a physical role, with Cusack and his friends (Jack Black and Todd Louiso) hanging out in a record shop and debating various top five lists like “Top five recording artists” and “Top five musical crimes perpetrated by Stevie Wonder in the ’80s and ’90s.”

High Fidelity also told a compelling story about love and relationships, as Rob attempts to figure out where he went wrong in the past and fix his current romantic situation, while also reorganizing his record collection autobiographically.

“I’m not as much of a collector in person, but I certainly value music the same way,” says Cusack of his character. “A lot of people live autobiographically through art, and they have albums and songs and movies that mean something to them in their life, when they first heard the song, or the era of the song. Those themes run close with me.”

High Fidelity was also the breakout role for Jack Black, whom Cusack recruited for the part. “I knew we had an ending to the film because I knew Jack and had seen his act Tenacious D in Los Angeles,” says Cusack. “I knew the part was perfect for him and that he would be able to knock ’em dead with the music at the end. We had a ball.”

Beyond being one of the most entertaining movies about music ever, High Fidelity captured an audience through the relatable characters and emotional narrative.

“It tells a lot of secrets about men, our inner monologue and thought processes,” says Cusack.

On hand for the screening and conversation, Cusack looks forward to the chance to talk with fans of the film.

“What we usually like to do is take questions directly from the audience,” says Cusack, who has toured with other films. “They’re into the movies and know them well. I like to take questions and let them ask whatever they want.”

Past guests to SIFF have included stars like Bruce Willis, Susan Sarandon, Meg Ryan, Robin Williams and Danny Glover, and it wouldn’t be a Sonoma event without offering world-class cuisine from local artisans and exceptional wine from Sonoma vintners to go with the films.

This year includes another packed lineup of parties and screenings, starting with the opening-night reception featuring live music from the Rich Little Band and a screening of the new film Ladies in Black, about the lives of a group of department store employees in 1959 Sydney and directed by the Oscar-nominated Bruce Beresford.

Other special events include the very popular Chefs and Shorts Dinner on March 28, featuring highly regarded culinary luminaries preparing a five-course dinner inspired by short food films from around the world.

Another must-see highlight of this year’s SIFF is the UFO symposium on March 30, boasting two investigative documentaries, Aliens at the Pentagon and The Nimitz Encounter, and a panel discussion. There’s also a showcase of the Lunafest traveling film festival on March 30 with a program of films by women filmmakers. Beyond the festivities, SIFF supports the visual arts educational programs in Sonoma Valley schools and community outreach programs.

Passes for the Sonoma International Film Festival, running Wednesday to Sunday, March 27–31, at Sebastiani Theatre and nearby venues in Sonoma, are available at sonomafilmfest.org.

Founded in 2007, the Sebastopol Documentary Film Festival is the North Bay’s premier showcase of independent documentaries from both international filmmakers and homegrown talent. Returning this March 28–31 for its 12th year, this year’s festival boasts one of its most locally focused programs yet, with films covering the breadth of lives in the North Bay.

Opening night’s film, Harvest Season, follows the stories of Mexican-American winemakers and the migrant workers in Napa and Sonoma counties, who grapple with several issues while 2017’s wildfires ravaged the region.

The next night, the documentary Holly Near: Singing for Our Lives shines a spotlight on Sonoma County resident and songwriting activist icon Holly Near. Directed by veteran filmmaker Jim Brown, the film comprises Near’s own footage and recordings, interviews with contemporaries like Gloria Steinem and Jane Fonda, and a live concert filmed at Berkeley’s Freight & Salvage. Throughout it all, Near’s work in several social endeavors highlights her ability to inspire peace, justice, feminism and multicultural consciousness.

Other film highlights includes the March 31 anniversary screening of the early internet documentary Home Page and filmmaker Doug Block’s subsequent blog, the D-Word, an online discussion forum that includes over 16,500 members from 128 countries, and is in its 20th year.

Several short film programs, conversations, panels and other special events complement the feature film schedule, taking place Thursday to Sunday, March 28–31, at the Sebastopol Center for the Arts and Rialto Cinemas in Sebastopol.

Finally, San Rafael takes to the stars in a big way when it welcomes iconic actor, writer and director William Shatner to town for a conversation to accompany a screening of the best Star Trek movie ever, Star Trek II: The Wrath of Khan, on May 16 at the Marin Center.

In revisiting his beloved character of James T. Kirk, captain of the starship Enterprise in both the original 1966 Star Trek television series and then in seven feature films, the first thing that Shatner points out is that the character almost didn’t exist.

“The people who were doing Star Trek had made a pilot with another actor,” says Shatner. “And they couldn’t sell it, but the idea was intriguing enough. A very unusual and maybe unique event took place; NBC said make another pilot with a different script and recast everybody except the guy playing the Vulcan [Leonard Nimoy].”

So it was, and the role of Captain Pike was changed to Captain Kirk. Shatner was called in to read the new part. “I thought they took themselves a little too seriously and I suggested that we have more fun with it,” he says. “I had, the year before, done a film on Alexander the Great and I was riding horses, wearing a breechcloth and doing weight training. So I had an idea of what a hero might act like, and I kept thinking of a phrase I had heard somewhere, ‘the look of eagles.'”

Taking all that, Shatner created an archetype in science fiction, the brash but brave Captain Kirk, who fights for his crew and for the good of all. Though the original series lasted only three short years, the crew of the starship Enterprise would return in 1979 for the first of several feature films. Those films also famously spawned many other television series that continue to this day, not to mention books, video games and other media.

In revisiting the character of Captain Kirk in the movies, the actor approached Kirk as an older, wiser captain. “I began to look more closely on how an aging hero, who is one step slower, might act and feel,” says Shatner. “And on the loneliness of having an inanimate ship as the love of his life. There were many strains of things that I didn’t comprehend or look at when I was playing him on television.”

While 1979’s Star Trek: The Motion Picture garnered mixed reviews, the sequel became a smash hit with critics and audiences. Star Trek II: The Wrath of Khan is in fact a sequel to an episode from the original series, “Space Seed,” in which the superhuman Khan is revived from suspended animation and attempts to capture the Enterprise. That episode ends with Khan and his crew being exiled to a planet, where we find them at the beginning of the 1982 film.

“Somebody knowledgeable said, ‘Let’s get back to the series,'” says Shatner of Wrath of Khan. “The stories were the important part. So when they said let’s do a story instead of running-and-jumping, I thought that was the right way to go. And it turned out to be a success because we did that.”

As the title points out, Khan makes his wrath known in the movie, and as portrayed by the late Ricardo Montalbán, Khan is considered one of Star Trek‘s greatest villains. The film concludes with not only one of the most memorable yells in cinema history (“Khhaaaan!“) it features Shatner, Montalbán and Nimoy all giving world-class performances.

“Leonard was a wonderful actor, everything done so internally, and a great gentleman and wonderful friend,” says Shatner. “The best of acting is a tennis game between the actors, and there’s this playful thing that should happen. If it’s there, it becomes alive; even if the dialogue isn’t necessarily sparkling, actors can bring it to life if they bring themselves to life, and these guys were able to that.”