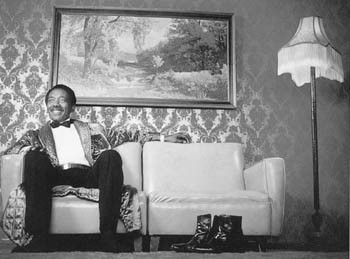 JAZZ TRUMPET legend Miles Davis once called organist Jimmy Smith the greatest musician he knew. Indeed, a short-lived 1955 Smith trio once featured sax god John Coltrane, and Smith revolutionized the jazz keyboard with his way-cool Hammond B-3 sound. And while Smith has lingered on the fringe of popular music after making his name in the jazz world with such classic Blue Note albums as 1957’s The Sermon and 1960’s Back to the Chicken Shack, this stellar organist has remained a major influence. A new generation of soul-jazz devotees–including Medeski, Martin, and Wood; Galactic; John Scofield; Will Bernard; and especially hipster icon John Lurie (during his Get Shorty soundtrack period)–have tapped the master’s grooves for inspiration. In 1994, the Beastie Boys sampled Smith’s “Root Down.”

Dot Com Blues provides Smith with a crack trio of backup jazz musicians–guitarist Russell Malone, bassist Reggie McBride, and drummer Harvey Mason–and then pairs the keyboardist on a series of tracks with an all-star lineup of guest blues performers that includes Etta James, Dr. John, B.B. King, Taj Mahal, and Keb’ Mo’, as well as the Texacali Horns. The result is one of the best jazz-soul/blues albums of the year, although at times Smith is relegated to little more than a support role for his guests–for instance, this version of Taj Mahal’s “Strut,” with Taj on lead vocals, is virtually identical to the one released on Taj’s recent studio album.

Thankfully, Smith and his band get plenty of elbow room on a handful of unaccompanied tracks, including Smith’s own “Eight Counts for Rita,” the chestnut “C.C. Rider,” and a glorious almost nine-minute version of Duke Ellington’s “Mood Indigo.”

That last track also appears on Fourmost Return, recorded in 1990 at Fat Tuesday’s in New York (a seven-track set, Fourmost, from the same session was released a decade ago). This swinging little set glides along easily and reunites Smith with tenor saxophonist Stanley Turrentine, guitarist Kenny Burrell (both veterans of Smith’s successful ’60s quartets), and drummer Grady Tate. The band once again tools up “Back to the Chicken Shack,” which first paired Turrentine and Smith nearly 30 years earlier.

Absolutely amazing stuff and a must-have for any soul-jazz fan.

Various Artists Have You Had Your Vitamin B-3 Today? (Label M)