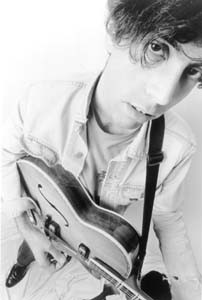 Various Artists
This Note’s for You, Too!
Innerstate)

NEIL YOUNG is a slippery character. Or at least his songs have proved slippery in the past for those attempting to put their own stamp on them (Joni Mitchell and Roxy Music being the notable exceptions.). After all, for 30 years the idiosyncratic singer/songwriter has straddled the fence between acoustic warrior and grunge god, ranging lyrically from lonely country boy to angst-ridden avenger and delivering high, frail vocals that defy imitation (though they have proved ripe for parody). He’s an original, no doubt about it. He’s also a huge influence on a horde of alternative rock and country acts.

This two-CD anthology isn’t the first time the music world has paid tribute to this visionary. And the results this time around are uneven at best, often downbeat, with few of these artists managing to reinvent Young’s compositions in the same way that Young himself is able to from time to time. Still, This Note’s for You, Too! can kick some serious butt, thanks to a plethora of great guitar work by the likes of former Television axeslinger Richard Lloyd, ex-Dream Syndicate and Gutterball honcho Steve Wynn, Chris Cacavas of Green on Red, and Eric Ambel of the Del Lords.

The discs are organized chronologically and run from the Treble Spankers twangy cover of 1969’s instrumental “Aurora” to Slobber-bone’s faithful rendition of 1994’s anti-commercial anthem “Piece of Crap.” Former Occidental neo-folkie Sonya Hunter dishes a rich, dirgelike “Expected to Fly.” Among the many other contributors are Lee Renaldo of Sonic Youth; Matt Piucci of Rain Parade teaming with Crazy Horse’s Billy Talbot; sometime REM collaborator Peter Holsapple and Vickie Peterson of the Bangles; and Russ Tolman and Richard McGrath of True West.

Unfortunately, most of the 37 tracks here lean on Young’s heavier material, overemphasizing the longing that colors much of the songwriter’s work while masking his sometimes playful side. In the end, all this concentrated sadness, angst, and irony leaves you craving the country charm of “Till the Morning Comes” or the naiveté of “I am a Child.”

Hearing a collection of covers based mostly on Young’s exhilarating rockers and dark-side dispatches makes you appreciate just how much depth and breadth Young shows in his own work–and that may be the best tribute of all.

WHAT A BLAST! At the tender age of 76, vibist Milt Jackson–a veteran soloist and pivotal member of the Modern Jazz Quartet–has delivered one of the finest recordings of his illustrious career. From the familiar melody of the opening track, his signature song “Bag’s Groove,” to the whimsical closer “Recovery,” Jackson performs a dazzling balancing act, finessing his way between soulful swing arrangements and lush ballads. Not since MJQ’s 1988 Grammy-winning Ellington tribute has Jackson displayed so much sensitivity and unbridled romance in his playing. A lot of the credit for this dynamic CD goes to bandleaders and arrangers John Clayton Jr. (bass), brother Jeff Clayton (lead alto sax, flute, and clarinet), and drummer Jeff Hamilton. John Clayton and Hamilton have collaborated with Jackson since the ’70s, and they have a real affinity for the elder jazzman’s revolutionary approach to his instrument. You could say this project was 25 years in the making. Payday seldom sounded so sweet.

THEY SAY imitation is the sincerest form of flattery, but no one can fault Big Bill Morganfield for sounding like the legendary Muddy Waters, a man Big Bill just called dad. This recording debut drips with gritty South Side Chicago blues energy, thanks to a backup band that includes former Muddy Waters Band members Pinetop Perkins, Willie “Big Eyes” Smith, Bob Margolin (who doubles as producer), and Paul Oscher. Five strong originals in the Chicago blues style and a respectable flair for bottleneck slide affirm that Big Bill’s living up to his genes, even if he can’t growl like his dad.

POWERHOUSE folk-guitar flatpicker Doc Watson runs through a comfortable front-porch session of classics with grandson Richard filling for the first time the role of second guitarist. Richard’s father, Merle–a brilliant guitarist and five-string banjo player–died in a 1985 tractor accident. Richard doesn’t display his dad’s brilliance, but holds his own with one of the world’s greatest guitarists. Overall, the session is informal, and Merle’s spirit looms large as this trio (rounded out by bassist T. Michael Coleman) rework material that Doc and Merle visited on many a day.