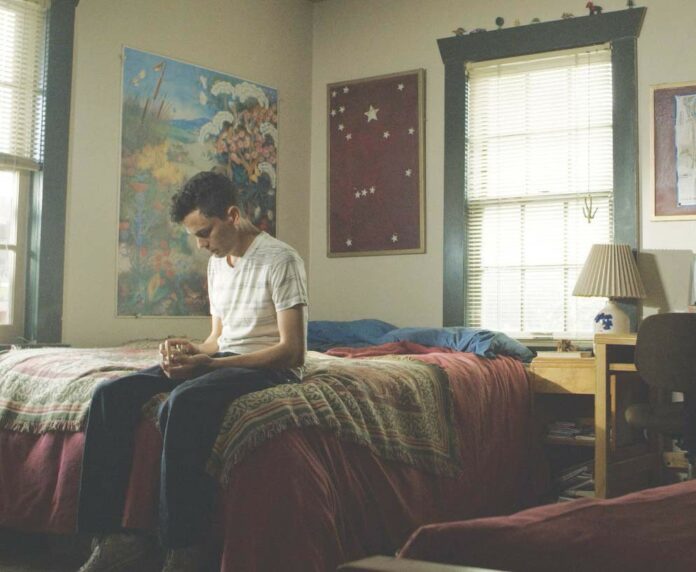 Mute, hooded and clutching an intricate wooden puzzle, a young man (Weston Lee Ball) walks out of a lightly raining night into a police station lobby. Asking for a pen and a piece of paper, he writes the sentence, “My name is Donovan Reid.”

“I knew going into this project that we were going to have limited resources, so while I was writing I had very specific locations in mind that I had been to before while I was growing up in Sonoma County,” says Smagalski.

This good-looking, low-budget tantalizer goes straight into the mystery of a 10-year old boy’s vanishing and reappearance as a man a decade later. Yet after he’s grilled a bit by the police, we have evidence enough that this supposed Donovan Reid is lying.

On the one hand, this mystery mirrors real-life situations, as in the recent case of an imposter in Ohio who pretended to be the vanished Timmothy Pitzen. On the other hand, Donovan Reid avoids the quick resolution of that midwestern masquerade—a fast DNA test revealed the claimant to not be Pitzen. It takes a bit of work to avoid giving this young man a similar test to solve the riddle; it’s like the lengths Hitchcock took to keep his characters from going to the police.

The cast is poised enough to suspend disbelief and they almost all look like they’re on their way up. In particular is Ball, a slight, haunted type, and the appealing Jazmine Pierce, as Harper, who knew Donovan as a boy and who wrote a book about the tragedy. Pierce’s Harper is cozy and guileless; any reporter who looked that open-faced would have a smooth career.

Anthony Martinez, as Donovan’s father Hank, is loving, fallible and a little too trusting. If there’s nothing as dire as a drunken dad, Martinez is more frightened of himself than maudlin in a scene where he’s bathing his nerves in bourbon. Lydia Revelos, as Donovan’s mother, is required to do the heaviest lifting in the picture, as she works through her suspicions. Cotati’s Mike Schaeffer stars as the shrewd police detective who has been on the case since the boy Donovan vanished, quietly authoritative as the sort of cop who gets fierce pleasure out of cornering a liar.

The best aspect of Smagalski’s well-built feature-length debut is the ambience.

“I wanted the two main locations to emphasize the tones of the story being told in those spaces,” says Smagalski.

Christine Adams’ photography of the Sonoma coast is gorgeously somber, setting a mood with lapping water and ribbons of fog, and Santa Rosa-based composer Jared Newman’s score provides an appropriate musical match for the story; electronic howls for the tensest moments, and moods similar to the ethereal minimalism of ‘70s Brian Eno.

Donovan Reid is evidence not just of one career worth watching, but of several.

Charlie Swanson contributed to reporting on this article. ‘Donovan Reid’ is available on Amazon Prime. donovanreidmovie.com