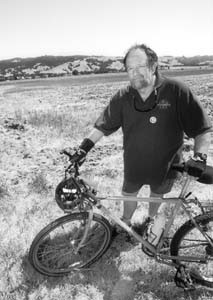 Outer limits: Rohnert Park City Councilman Jake McKenzie, on the edge of the town’s new urban-growth boundary, is calling for “smart growth.” He will be a panelist at an upcoming workshop that may help define just what that means.

Exploring the limits of the county’s growth

WHEN Ann Hancock thinks back on her stint as a local real estate agent, she remembers clients buying into the Northern California lifestyle of expensive houses and multiple cars sustained by long commutes, longer working hours, and little free time. “I don’t think people realize how much we have given up to sustain this quality of life–people feel really stretched,” she says. “Not having to spend your life on the freeway, not worrying about the mortgage so much, spending time with the children, getting to know your neighbors, that’s the kind of things we will get if we get off the economic treadmill,” she says.

Slowing down the treadmill is part of the focus of Sustainable Sonoma County, a group working to maintain the qualities that have made Sonoma County one of the fastest-growing regions in the state, without continuing to deplete resources like open space and air and water quality. Those issues–the proliferation of urban-growth boundaries, increased agricultural demands on Russian River water, the dilemma of how to dispose of Santa Rosa’s wastewater, the impact of Highway 101’s proposed expansion, the lack of affordable housing–have dominated the headlines in recent years.

On July 23, Sustainable Sonoma County is hosting its first event, “Better Not Bigger: Grappling with Growth in Sonoma County,” a one-day workshop on urban growth.

Eben Fodor, a community planning consultant from Eugene, Ore., and author of Better Not Bigger: How to Take Control of Urban Growth and Improve Your Community, will be the workshop’s keynote speaker.

“We’re trying to change the mind-set, going against the American conventional grain, and bust open the myth that growth is always good,” says Hancock, an administrator at the New College in San Rafael and one of the group’s core.

The average U.S. citizen has an “ecological footprint” of about 25 acres, because of the heavy use of imports of fossil fuels, computers, food, and clothing, adds Hancock. “That’s the world’s largest. Sustainable culture requires that each citizen’s footprint not exceed 4.2 acres,” she says. “What we see as the challenge of our generation is to become sustainable.”

Says Fodor, “Mostly we hear about the benefits of growth, bringing jobs, building tax bases. I find that in many cases the benefits are nonexistent. Tax revenues proclaimed for a particular project are more than offset by costs the project will create for a net fiscal drain on the community.”

The reason? While development generates revenues, it also results in such costs as schools, roads, sewers and parks, and police and fire services, Fodor says, adding that housing has the biggest impact on a community.

“[The added cost] is $20,000 to $30,000 per house, and a large part of that has to do with schools,” he says. “The average house has two thirds of a school-age child. For every 1,000 units developed, you need to build an entire new school, and the cost must be paid by the community or the community will pay in other ways, with declining services, more crowded streets.”

SIGNIFICANT LOCAL sustainability issues include water and air quality, land preservation, transportation, job and housing locations, and energy consumption, says Susan Bryer Starr of Sustainable Sonoma County. “We’re dealing with a citizenry that recognizes that Sonoma County is a truly unique place in the world,” she says. “The health of the resources, the small scale, the landscape, the air quality, and biodiversity, these are not trivial treasures to people who live here.

“People see these landscapes in other parts of the country vanish because of the rampant drive to develop,” she adds. “We have a chance in Sonoma County to preserve these resources before they are gone.”

For Rohnert Park Councilman Jake Mackenzie, the bottom line is population. “We’re facing some huge problems in California and the Bay Area and Sonoma County, and they all center around how we’re going to deal with an increasing population,” says Mackenzie, who is one of the workshop panelists. “We constantly need to be reminding people that this is a very, very real problem.

“The problem is you’re banging right up against more people being born into our society and pressure from all of these people, not to mention people coming up from Santa Clara County and having half a million bucks in their hip pocket,” he adds.

Shutting the gates to Sonoma County isn’t the solution, Mackenzie says. It’s smart growth. “We feel we have to accommodate some growth, but we’re not necessarily wanting to build houses at the rate that people who own land around the city would like us to.”

And population growth is part of a larger, more complicated picture, says Starr. “Is it a population issue or a consumption issue?” she wonders. “Could we have twice as many people if we consumed half as much? Do we have a carrying capacity in Sonoma County? This is what we’re going to be exploring.”

The how of community sustainability requires more than public will, Fodor says. Communities must adopt policies that reflect priorities. “One of the myths that surrounds urban growth is that there is nothing we can do about it,” he says. “The whole idea of determining how much and how a community grows is dismissed as not a legitimate policy question, when things can be done to determine the nature and rate of growth.”

While there is no silver bullet–and no one community has emerged as the model of sustainability–Fodor says the future is in a framework of policies that moderates growth to protect a community’s lifestyle and resources.

“Growth debates and discussions tend to get stalled at the same points,” Fodor says. “You’re either for it and want lots of it, or you’re against it and want to shut it down. It leaves out an entire range of options in between.

“The first step towards moderating growth in a community is to stop subsidizing it,” he adds. “Currently, most communities subsidize growth in at least 10 different ways with public resources.”

Developers aren’t exactly thrilled with Fodor’s advice. “I’ve faced a lot of hostility from developers,” he says. “The developers have had a profound influence on land-use policy in most communities around the country. They dominate in spite of the fact that they are a relative minority in the community.

“Trade associations don’t want citizens in the process; they want subsidies, and no regulations,” he adds. “I’m trying to shift those policies in a public-interest direction that reflects the long-term interests of the broader community.”