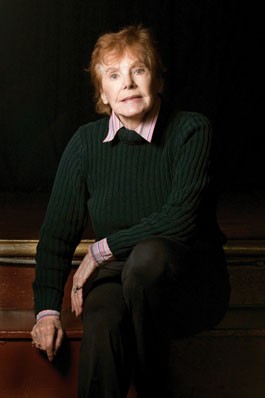 The Belrose has trained generations how to move

Nestled in the heart of Marin County, where George Lucas brought a wave of high-tech production standards to the entertainment industry, the quaint Belrose Theatre in San Rafael stands true to the “good old days” of show business.

The Belrose is a small venue with a flourishing spirit, currently serving as San Rafael’s only live theater. The red velvet curtains hang heavily above the stage. On the front wall, an expansive window of stained glass casts glimmers of red, green and gold across the wooden dance floor, where owner and executive director Margie Belrose has taught dance classes every week for over the past four decades.

The Victorian-style theater earned its place in Marin County’s history when Belrose and her husband David purchased the former Trinity Lutheran Church in 1962 and renovated it into a new location for their performing arts center, offering instruction in dance and theater arts.

After her husband passed away in 1971, Margie Belrose took over the entire business, producing plays, managing dance and acting classes and raising her son and daughter in the two-story apartment behind the theater that she still calls home.

“I don’t think of this as a job. It’s my life. I love what I do,” says Belrose, a spirit aglow in her sprightly blue eyes. “People sometimes say, ‘When are you going to retire?’ and I say, ‘To what?'”

The Belrose Dinner Theatre puts on two to four productions each year, including the drama The Lion in Winter, now in its eighth season. Belrose’s time has been occupied with rehearsals for The Twilight Zone, which opened Oct. 9 and runs through Nov. 21. She continues to run everything behind the scenes, serving dinner and drinks to her guests at the candlelit tables during opening nights and appearing as a main character in many productions. With a passion for teaching, Belrose instructs jazz, tap and acting classes every week. Her students span a broad range of ages, from 12-year-olds in her acting workshop class to 80-year-old tap dancers.

“Though thousands of people have passed through here, I still keep in touch with many of my students,” Belrose says proudly.

The Belrose faces the modern streets outside, its nostalgic aesthetic in sharp contrast to fast-paced suburbia, where families more often take their children to health clubs for theater arts instruction. “It’s a very different world than it was 30 years ago. I taught 200 students a week by myself back then, but now I’m lucky to have 50, because the world has changed. Keeping a ballet class going has become more and more difficult,” Belrose sighs.

Maintaining the Belrose is a family affair. Daughter Dea teaches a tap class once a week, and son David manages the costume shop in the basement, which opened in 1977 and serves as a large source of revenue for the theater. The colorful costume rental shop brims over with more than 3,000 costumes, masks, wigs and hats, all catalogued into genres within the small basement space. With over 700 Renaissance costumes, the Belrose also acts as a main supplier to seven Renaissance fairs across the country.

The prop room behind the stage teems with old typewriters, tools and trunks, a testament to the community giving back to the Belrose over the years. “Most of the props, like the old wooden wheelchair sitting on the stage for The Twilight Zone rehearsals, simply appeared or were donated to us,” Belrose says. “We appreciate that so much, because some of these things are so hard to come by these days. They are all treasures.”

Every Thursday night for the past 13 years, the Belrose hosts an open mic night. A core group of attendees shows up, gathering around candlelit dining tables to cheer on the performers.

“The Belrose is a place where people can grow artistically and it gives them a chance and a venue to expand their horizons,” Belrose says. “I think if this place was gone, San Rafael would be missing a cultural advantage, but I’m always thinking of ways to make it better. I sit in here during every show and think of what I can do to improve upon what we have here.”