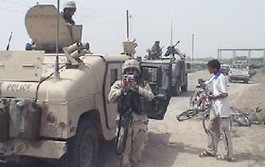 So now we know what the Iraq War is about: it’s not about WMDs, it’s about Monterey jack. The War Tapes follows three New England-based National Guardsmen who recorded video diaries of their tour in Iraq. Stocky family man Michael Moriarty, 34, from small-town New Hampshire, volunteered to go after 9-11. A younger voice comes from Steve Pink, a denizen of the outer Red Sox belt. The sequence of Pink at his local bar, bantering with his bright girlfriend, Lindsay, shows how poorly Edward Burns and Adam Sandler have handled the subject of this kind of young man.

The Lebanese-born Zach Bazzi, 24, of Watertown, Mass., speaks Arabic. Formerly stationed at Kosovo and Bosnia, Bazzi seems to have the widest international perspective. One of his struggles would seem to be the problem of being the eldest son of a doting single mom.

The guardsmen’s war involves 16 months in a compound under fire from an unseen enemy. At the besieged Anaconda base, the guardsmen get their news from CNN, just like everyone else. Their main duty is to provide escorts for the endless lines of convoys speeding out on one-lane highways.

Some of the soldiers call Iraq a “cheese war” because the trucks are loaded with American goodies. (As one soldier puts it, “Why the fuck am I guarding this truck full of cheesecake?”) The convoys are run by Kellogg-Brown-Root/Halliburton–and where are these endless rows of trucks going? That’s the one question the movie won’t tell you, leaving you to surmise it’s the Iraqi oil fields. Still, The War Tapes is clear about KBR/Halliburton’s handsome profits on everything from catering the mess hall to running the Base Exchange, a mini Wal-Mart.

The War Tapes shows us front-line fighting. We witness a firefight by night, in green night-vision zombie-cam; in daylight, there’s pulverized corpses from the aftermath of Fallujah and the oily, bloody residue of a double-car bombing. The training of the Iraqi replacements hardly gives much faith in the war’s progress. What we do see is a group of U.S. soldiers howling contempt at an older man who can’t master his rifle.

The War Tapes is different from Gunner Palace; it has less bravado, less bluster. Talking to credited director Deborah Scranton, these guardsmen open up, sometimes dropping the soldier’s mask of nonchalance. Maybe having a female interviewer helps? The documentary is built well enough to hold contradictory ideas; the war is a horrendous mistake, but the soldiers are carrying it out bravely, and it’s a relief to see our narrators on the plane home. At the same time, troop rotation just means that inexperienced soldiers will be taking their place.

In the interviews back in America, Moriarty and Pink are angry at the public’s perception of the war. “If you don’t support the war, just shut up,” Moriarty says. Pink claims the human cost is justified, even in the mere terms of the oil we need. Neither came home as strong as they went: Pink has asthma; Moriarty has carpal tunnel, chronic pain and flashbacks. Brazzi is in the last scene, launching a kayak into the solitude of a lake. A title card says he’s going to college to study public policy, perhaps in hopes of heading off further wars as misbegotten as this one.