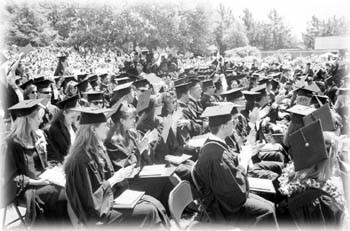 Photo courtesy of The Community Voice

THE MAY 25 commencement at Manchester College, a small liberal arts school near Fort Wayne, Ind., was much the same as commencement at colleges everywhere: awards, speeches, caps and gowns, and cheers from happy seniors and parents.

One thing was different, though. About half the graduates wore green ribbons pinned to their gowns. A note in the commencement program explained that these students had signed the following statement: “I pledge to investigate and take into account the social and environmental consequences of any job opportunity I consider.”

Troy E. Lucas, 21, was one of the hundred or so grads taking the college’s environmental and social pledge, now in its ninth year. “I think I can make a difference,” says Lucas, who plans to work in a mental health center.

In California, activists at Humboldt State in Arcata came up with the idea for a graduation pledge in 1987 as a way to promote social awareness and responsibility. A year later, Manchester students adopted the pledge, which is now a campus tradition.

“It seems like it has always been a part of the graduation ceremony,” says Kristi A. Zimmerman, 22, a leader of the Manchester pledge movement this year. She will begin grad studies next year in higher education counseling.

Humboldt State and Manchester College both have long traditions of social and environmental activism. Humboldt State grads taking the pledge wear multicolored ribbons pinned to their gowns. After they receive their diplomas, seniors walk to a nearby table and sign the pledge.

The idea has yet to catch on at Sonoma State University.

At Manchester College, students receive a wallet-sized card with the pledge on it. Students say the pledge helps them remember their ideals at a time when the pressures of getting ahead and making money are greatest.

Neil Wollman, a psychology professor at Manchester and the faculty coordinator of the national pledge program, says it is more than a consciousness-raising device. “Our hope is that if enough people do it, it’s not just symbolic. It can actually have an effect,” he says.

As it is worded, the pledge is non-ideological, and it could lead students with different beliefs to very different actions. “It is probably going to draw more people on the left than the right, but people can define it as they want,” Wollman says.

While many college grads attend the nation’s top law schools, medical schools, business schools, and other institutions to qualify for entry to high-paying careers, others undertake graduate studies to work in the public service sector. These graduates may face tens of thousands of dollars in loans, but want to accept relatively low-paying jobs of social commitment.

To help them, dozens of programs now offer what is known as “public service loan assistance.” Under such programs, grads who go to work for non-profit organizations or perform other public service receive help paying off their education loans. Some institutions simply “forgive” a portion of the debt, while others offer cash grants.

Michael Alevy, 39, is a 1996 graduate of Vermont Law School who works as a public defender in New Haven, Conn. He says that in January the first of two $2,000 grants he will receive this year “arrived like manna from God.”

He has about $80,000 in school loans and makes about $30,000 a year in a temporary job with no benefits. His monthly loan obligations are about the same as a house payment. “It has meant the world to me,” Alevy says. “It has allowed me to do what I think is very important work.”

Pressure from students led to the establishment of public service loan aid, according to Francine Hahn, organizer for the National Association for Public Interest Law. “Most of them were started by student initiatives. Even if one has been established, students want to see how they can improve it,” Hahn says.

A year ago, law students at the University of Denver began raising money for grants to grads who go into public service with charity auctions and collecting donations. The students have raised $30,000 so far, with a goal of $100,000, which would be an endowment for a grant program.

“A lot of MBA students are contradicting the image of MBAs in the ’80s and do have broader concerns than just making a lot of money,” says Nancy Katz, executive director of San Francisco­based Students for Responsible Business, a 3-year-old organization that now has 1,100 business student and alumni members.

Are today’s college graduates more committed to social and environmental causes than previous graduates? Robert L. Sigmon, senior associate for the Council of Independent Colleges, believes activism on campuses comes in cycles. He points to the founding of the Peace Corps and Volunteers in Service to America in the 1960s, public service programs during the Great Depression of the 1930s, and missionary movements in the early 1900s.

“Every 30 years or so, it sort of pops up, this call to public service,” says Sigmon, an adviser on student community service to the council, an organization of 425 private liberal arts schools. “What’s new now is this relationship to higher education.”

According to Sigmon, colleges and universities now are actively supporting public service for students and graduates, and not simply out of altruism. Institutions also view public service as an important learning experience, he said.

Jonathan Hutson, 32, of Keene, N.H., has long wanted a career helping abused and neglected children. The New York University Law School graduate has $90,000 in education loans, which he has to start paying soon.

If all goes well, Hutson expects to get a job that would pay him $28,000 a year. With $9,000 in annual public service aid from New York University, Hutson thinks he can get by financially. Meanwhile, many of his classmates are making $85,000 a year or more on Wall Street. “The money doesn’t impress me. It’s not what I’m interested in,” says Hutson. “I work only for causes I believe in and with people I trust.

“How many corporate attorneys can say that?”