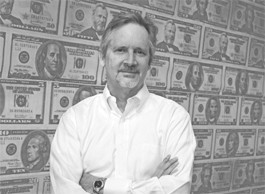 Photograph by Rory McNamara
Fuming and funds: While the SBA is ostensibly devoted to aiding small business, Lloyd Chapman discovered that Bechtel and other megacorps also benefit hugely.

On May 8, 2003, Chapman appeared before a Capitol Hill hearing, convened at his instigation, of the House Committee on Small Business. He was there to challenge the Small Business Administration’s practice of awarding government contracts intended for small American companies to multinational corporations instead.

Even though the hearing did not turn out to be the watershed exposé he had envisioned–he now calls it “a government pep rally”–it still drew considerable attention, and Chapman was confident that the issue would soon be addressed.

“Since that time, there have been 12 to 15 federal investigations and two private studies,” he says, spreading documents out across a conference table in the offices of the Petaluma computer firm he cofounded. The most damning report, issued by the SBA’s internal inspector general in February 2005, states that “one of the most important challenges facing the Small Business Administration and the entire federal government today is that large businesses are receiving small business procurement awards.”

But one, two, three years passed, and there was no legislative response.

“It’s unprecedented for a problem of this magnitude to have been exposed at this level and not addressed,” Chapman fumes. “Think of the power you’ve got to have in Congress to shut down something like that. That’s some juice. That’s impressive.”

Part of a modern business park in Petaluma, Chapman’s office has a wall full of photographs taken with political and pop culture figures from presidents and governors to racecar drivers. (It’s also the headquarters for the American Small Business League, the trade and lobbying association Chapman formed in 2002, which now boasts 100,000 members.) A lifelong Republican and productive entrepreneur, the San Antonio native was taken aback when Margie Walker, one of his staff members at GC Micro, came into his office on a summer day in 2002 with tears streaming down her face. She had been working for weeks on a complicated bid for a federal contract for computer controllers. The contract was a “set-aside,” meaning it was designated specifically for smaller companies to bid on. But, Chapman relates, Walker had just learned “she had lost it to a company in Amsterdam with 20,000 employees and operations in 20 countries. I was so mad I couldn’t take it.”

Suspicious that this might not be an isolated instance, Lloyd quickly began to search the SBA’s database of companies with which it has contracts. “I found 600 of the biggest companies in the world,” he snorts, among them AT&T, Hilton Hotels, Nike, Sprint, Barnes & Noble and the now infamous Halliburton, along with multinationals from Switzerland, the Netherlands and the United Kingdom.

Those findings were clearly at odds with the Small Business Act of 1953, which set a goal of directing 23 percent of the federal government’s contracts to the nation’s small businesses. Half a century later, the law remains in effect.

“So I started calling everyone in Washington,” he says. He finally found a sympathetic ear at the General Accounting Office. “They launched an investigation based on the information I had given them. That lasted six months, and they found out I was right–that billions of dollars in small business contracts was going to big companies.”

Still, the hearing helped prompt several further investigations, including three that identified official malfeasance. Chapman ticks them off on his fingertips: “The SBA’s own inspector general found fraud in ’95; they found more fraud again in March of 2005; the SBA Office of Advocacy found ‘vendor deception,’ and then the rest of it are actually policies the government has passed to intentionally allow this.”

Among those policies are complex rules regarding the multimillion dollar contracts that require dozens of subcontractors and a stunningly lax system of monitoring who is allowed to bid on what. Chapman asserts that many corporations are “intentionally misrepresenting themselves in order to receive these federal small business contracts. I can think of one company, they told their stockholders they weren’t a small business in February of 1998, and in 2004 they received $500 million in federal small-business contracts.”

The abuses are so widespread, he alleges, that “it could be as much as $100 billion a year in federal small-business contracts that are being diverted to large companies. At a minimum,” he estimates, “it’s $50 billion a year.”

Kathryn Seck, press secretary for Sen. John Kerry, D-Mass., who chairs the Senate Committee on Small Business and Entrepreneurship, attributes part of the problem to rolling reductions in the SBA budget, including cuts of 40 percent under the current administration. “In the 1980s, there were well over 200 procurement center representatives,” she notes. “Today, there are approximately 50 individuals monitoring and reviewing $340 billion in federal contracts.”

But aside from a general antipathy for massive corporate pork, why should anyone who’s not bidding for those deals care? Chapman avers there was a good reason Congress created those small-business set-asides 54 years ago.

“The U.S. Census Bureau tells us that 98 percent of all U.S. firms have less than a hundred employees; around 89 percent of all American companies have less than 20 employees; and the average American firm has about 10 employees,” Chapman explains. “So when you’re talking about diverting $50 billion a year away from the firms where most Americans work, that’s going to be felt in Rohnert Park and Santa Rosa and Novato and every city in America.”

Frustrated by the lack of congressional response on the issue, Chapman aggressively backed Democratic candidates in 20 key districts across the country in the 2006 midterm elections, feeding the local newspapers stories of the Republican incumbents’ inaction on his pet issue. Nineteen of those candidates won.

Following the partisan shift in Congress that resulted from the 2006 midterm elections, Rep. Bruce Braley, D-Iowa, introduced H.R. 1873, the “Small Business Fairness in Contracting Act,” which sailed unanimously through the House Committee on Small Business on April 24. The bill, whose 28 co-sponsors include 10 Republicans, is intended to end abuses and tighten loopholes in the federal contracting process.

“It red-flags businesses which have been found to be other than small” in the government’s contracting database, explains Kate Gilman, a committee staff member. She adds that the intended result is “pruning all the non-eligible entities and prevents businesses that have been discovered [to be wrongly coded as small] from re-registering in that database.”

Another key provision would require the companies seeking the small business contracts to affirm each year that they are still qualified to do so, a notable change from the five-year recertification cycle proposed by SBA chief Steven Preston.

Chapman’s primary complaint is that the new bill does not address the thousands of mis-awarded contracts already on the books, although he concedes it should prevent new ones from being added to the list. But his greater indignation is reserved for the recertification process.

“The scam is, it’s just for new contracts, not existing contracts,” he grumbles. “It’s designed to let the five-year recertification plan stand.”

H.R. 1873 also contains a provision that would increase that 1953 allocation of federal contracts for small businesses from 23 percent to 30 percent. But Chapman remains unimpressed. “It’s smoke and mirrors,” he snorts. “If you’ve got Boeing and Bechtel and Northup and Lockheed in there, what difference does it make?”