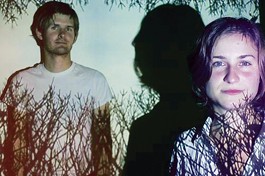 Like other two-member bands currently on the musical map (Lightning Bolt and Sleigh Bells come to mind), Robin Landry and Eric Kuhn, otherwise known as Silian Rail, manage to make a lot of beautiful noise with a limited amount of people power. A live performance by the Oakland-based duo contains enough drama to fuel a million soap operas, but this is the good, healthy kind of drama, the sort that derives from a driving combination of instrument and pedal-board manipulation instead of romantic entanglements.

Landry excavates a wild array of combinations from the fret board, digging into deep reverb-drenched riffs that build from anthemic highs to rhythmic lows. Kuhn plays everything else: drums, synthesizers, guitar and even glockenspiel. It all comes together like a cathartic exercise in ascension, as the riffs build up a swooping tension only to swiftly descend into shimmering, finger-picked melodies.

Silian Rail are the logical offspring of a lineage that began with the 1991 release of Spiderland by Slint, the legendary nearly instrumental group out of Louisville, Ky., who perfected the quiet-loud dynamic later built upon by Mogwai and then Explosions in the Sky (though some might argue that this type of heavy riffing truly had its start with Black Sabbath, or if you want to dig really far back, with early Captain Beyond). This is music for erudite headbangers, who have more likely come from a study session at the library than smoking weed behind the gym.

It’s no surprise that Silian Rail have performed original live scores for the past four years at the Madcat Women’s International Film Festival, or that their music was recently featured in the 10-minute short film The Recess Ends. Live, they are a cinematic, mesmerizing simmer of beats and riffs, one that conjures images of dark mountaintops and thunderous skies, rainbows shining through a break in the clouds, and all of the illustrious visions that arise from listening to epic, instrumental rock music.