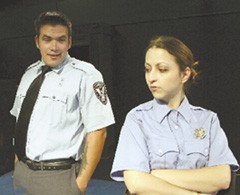 Sonoma County Repertory Theatre and Actors Theater both opened new shows last weekend, each of which serves as a complex study of the flexible nature of truth and untruth. Doug Wright’s I Am My Own Wife, at the Rep, is the about an American playwright who attempts to tell the true story of East German transvestite Charlotte Von Mahlsdorf, a tale that unfolds over the course of the Nazi regime and the brutal communist dictatorship that followed. Actor Stephen abbott takes on 35 distinct characters, including those of author Wright and Von Mahlsdorf.

Lobby Hero, by Kenneth Lonergan, is a tough-as-nails, noirish, profanity-laced comedy about a laid-back security guard stuck between a lobby desk and a hard place, featuring a quartet of characters trading threats and promises and more on a consecutive series of deceptively uneventful night shifts. In both shows, lies are the vital currency traded back and forth, and the Search for Truth–one of humankind’s loftiest goals–ends up seeming like a waste of time. In certain circumstances, lies can be every bit as moral as facts, and the truth can be as lethal a weapon as fabrication.

In Wife, the American playwright meets Von Mahlsdorf shortly after the fall of the Berlin Wall and sees him as a symbol of gay pride, a homosexual who not only survived two of the worst antigay regimes in history, but managed to operate gay brothels and harbor gay artists and wear dresses in public.

Von Mahlsdorf consents to being interviewed, telling a stream of impressively heroic and heartbreaking stories, from his boyhood living with a violent father whom he claims to have murdered, to the close call when he was nearly shot on the street by Nazi soldiers for wearing woman’s clothing. But when the playwright uncovers evidence that Von Mahlsdorf may have acted as an informant for the communists, turning in other gay Germans, he begins to doubt everything he believed and admired about the gutsy transvestite.

On Broadway, Jefferson Mays’ Tony-winning turn in Wife made him an international star, and now that the play has been made available to regional theater companies, Mays’ must surely be an intimidating act for any actor to follow. Kudos to abbott and director Jennifer King for even attempting the show, a theatrical high-wire act of the most dangerous kind, as the entire show is carried on the shoulders of a man in a dress.

abbott, who established himself as a versatile player in 2005’s Stones in His Pockets, is less physically convincing as a woman than the real Von Mahlsdorf was reported to have been, but he does fine at capturing the character’s watchful calculation and duplicitous charm, a trick he works primarily with his voice and facial gestures. When pressed for stories and facts, Von Mahlsdorf stalls for time by sipping tea, a signal to the audience that he’s about to launch a whopper, and the way abbott performs each new tea sipping is splendidly complex.

A mystery at its core, I Am My Own Wife is staged straightforwardly, with events unfolding gradually as the tension rises and the doubts pile up. Unfortunately, on the pre-opening night dress rehearsal I attended, the tension was a bit lacking in the first act, with each scene paced similarly to the scene before it. The second act is more gripping, as Von Mahlsdorf wriggles his way out of accusations and damning documents, emerging as both an imperfect hero and a tragic victim, all rolled up into one fascinating ball.

Like Von Mahldorf’s gender, nothing in Lobby Hero is what it seems to be. Jeff (Ryan Schmidt) is a self-described “fuckup,” a jokey kind of guy with no goals, no obvious sense of social duty and with a history of messing up every time an opportunity to improve himself comes along. He works the graveyard shift in the lobby of a New York high-rise apartment building, routinely devising ways to hide his late-night naps from his boss, William (a tightly rapped Norman Gee), while avoiding confrontations with the bullying beat-cop Bill (the truly scary Dodds Delzell) and lusting after Bill’s rookie partner, Dawn (well-played by Denise Elia).

This is the kind of play where little things add up to big things. William’s brother is a suspect in a brutal crime and has asked his upstanding brother to fabricate a believable alibi. Dawn, only three months on the job and desperate to make it as a police officer, has just blinded a drunk in an act of self-defense that would look like police brutality if Bill weren’t there to vouch for her. For his part, Bill is forcing Dawn to sleep with him in exchange for supporting her story.

Then there’s good-natured Jeff, played with remarkable naturalness by Schmidt, who is accidentally privy to all of this insider info and unintentionally digs himself in deeper as he attempts to do the right thing: help catch the right bad guy, bust the bad cop and, he hopes, get the girl in the end. Entertainingly conceived and very well acted by a tight, chemistry-loaded cast, Lobby Hero is a rich, rough gem of a show.

Special mention should be given to the ingenious set by Greg Phipps. Attractively askew, the lobby sits at an angle to the audience, with large windows and the merest suggestion of a street-front wall revealing characters coming or going or engaging in heated discussion outside the building. The lobby is delightfully spot-on, all fake marble and gleaming metal, stone benches and the obligatory potted tree. There’s a working revolving door, a nicely convincing elevator (playing an assortment of cheesy Muzak, each a sly musical comment on the action of the moment). The requisite drinking fountain is a nice touch, as is the hint of a back office, dominated, whenever glimpsed, by a counter stocked with coffee-making supplies, sugar packets and wooden stir sticks.

Make sure you stay to end of the curtain call, a clever and playful ending to a first-rate production.