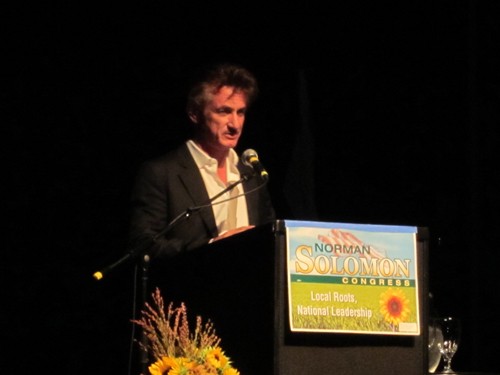 It’s been written up all over the North Bay, and yes, it’s true: Sean Penn lent his A-list Hollywood celebrity status to the Norman Solomon campaign for Congress on Tuesday at the Mystic Theater in Petaluma. Penn introduced Solomon, praising his “extraordinary energy as a servant to the people.” The Academy Award-winner told the story of a trip that the two took to Baghdad, when where he witnessed Solomon “not flinching” and not running away while protesting Iraqi women took batons and bludgeons to the head from police. Looking slightly disheveled in a black suit and white button down shirt, Penn made connections between the campaigning journalist, anti-war and anti-nuclear activist and the legacies of Senator Paul Wellstone and retiring congresswoman Lynn Woolsey, urging the crowd to stand up in “District Two.” Penn was ushered on and off the stage from the green room quickly, and did not interact with the crowd.

After the brief introduction, Solomon spoke for about 30 minutes about the importance of rejecting right-wing populism, farmworkers’ rights, the rejection of fear and racism, and the billions spent on the wars in Iraq and Afghanistan. “We are in five wars at the same time, and that is five too many,” Solomon told the cheering crowd. At one point, he was interrupted by a middle-aged man in the balcony who shouted for a good two minutes about how Solomon should “be a statesman and call for a general strike.” The man was ushered out of the building, and it was interesting to see the crowd boo his calls for a general strike while they cheered Solomon’s later endorsement of the Farmworkers Union and labor unions like the SEIU—the very people who would lead and benefit from a worker’s general strike. Maybe it was the man’s bellicose approach?

And at least one person wasn’t impressed with a famous actor’s appearance in small-town Petaluma. What do you think he’s planning on doing with that chain?