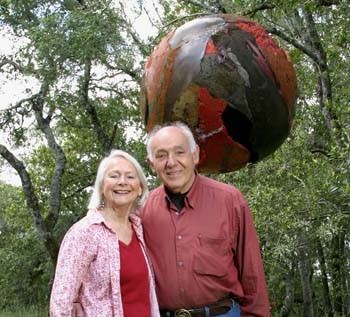 For the past decade, the outdoor sculpture grove at Paradise Ridge winery has presented a blank, albeit green, slate for the experimental, the conceptual, the just plain odd and the traditional. There was the year, for example, when nine fire-engine-red beds ran in a purposeful line through the treetops, swaying over the visitor’s head to represent a river bed of the firmament (“Domestic Nature,” 1997).

The pottery show curated by Guerneville artist Harley (“New Ceramic Horizons,” 2002) brought top names from the international clay world out to Paradise’s ridgetop to set biomorphic forms, towering figures and impermeable objects out to weather in a year’s worth of rain and sun. Cazadero sculptor Bruce Johnson both inaugurated the sculpture garden with its first show in 1995 and again filled the winery’s four-acre pygmy forest in 2000 with his old-growth redwood and copper structures.

In another exhibition, artists piped water in to keep moss-covered rocks on the arid hillside strangely, perpetually green, and built a conceptual triangle whose geometry could only be parsed with a keen eye while standing at an exact location and believing in the weight of the air. Such persnickety demands were rewarded when the ephemeral form was finally, breathtakingly, glimpsed (“The Secrets of Nature,” 1998). And married Santa Rosa light sculptors Michael Hayden and Kristina Lucas were among those who played with refraction and out-of-doors perception in 1999’s “Arborescence” exhibit.

What each year-long installation has had in common is that whether traditional, odd, conceptual or experimental, every object in each exhibit has been sculptural.

Walking the site on a recent foggy morning as the grounds are being readied for a new installation to open May 15, Parade Ridge co-owner Dr. Walter Byck chuckles easily. “I remember them all, of course,” he says, nodding to the leafy stand where the beds once ran through the trees and then turns to look back at where Lucas’ shimmering curtain of reflective squares once showered from limbs to the ground.

A decade-long labor of love tended to by vintner Byck and his wife Marijke Byck-Hoenselaars, the Paradise Ridge Sculpture Grove is finally extending its influence beyond the blonde hills of its Fountaingrove home. As reported before in these pages (“Byck’s Miracle,” March 2), the Bycks have done something that no one else has been able to accomplish among an often disparate and sometimes vying artistic community: they have brought it together for an ambitious summer-long project titled “Sculpture Sonoma.”

Involving some 12 Sonoma County arts organizations and 17 separate events in a sprawl of celebration–beginning with a Paradise Ridge Sculpture Grove exhibit titled “Spectrum”–“Sculpture Sonoma” was conceived to be by artists, for artists. Byck and his wife asked more than 120 local sculptors to name those North Bay artists who most influenced them and whose work they most admired. From that list came the slate of professionals gathered in the “Spectrum” show, with the others fanning out to various venues throughout the county. “Rather than let a curator decide, I let the artists decide,” Byck says.

On this misty spring morning, with only a week before “Spectrum” is to launch, Dr. Byck is characteristically calm. A tower of firewood stacked exactly from the ground straight into the snugness of a tree’s joint and handmade stone walls from previous exhibitions have been left in place as this “gallery” of acreage continues to be changed by forces both human and natural.

While some 23 pieces will be placed over the coming week, a few of the “Spectrum” pieces have already arrived, Cloverdale artist Joe Hawley is stringing what he calls a “spirosphere” from a long tree limb, where it floats freely in the air. Explaining that the sphere is made from the same light material as a surfboard, Hawley tugs the ball into place. The Bycks gamely stand beneath it, smiling upward.

In the eastern corner of the Grove, a massive steel dragon delicately twists on its pivot in the wind. A human-sized aperture hung with fluttering metal tiles made by physics master Ned Kahn was carelessly placed by a tree awaiting installation when Kahn realized that his art had found its perfect home, the tiles flirting nicely with the wind and framed by an oak. Clay sculptor Daniel Oberti’s planetary sundial moves on a whisper of a touch.

Byck is clearly in his element. He’s helping to indulge his good friend Bruce Johnson in his long-held desire to hold a sculpture “tail-gate party” (art on trucks) last this summer; he’s prodded and cajoled and charmed 12 arts organizations into cooperation under the auspices of the Cultural Arts Council; and 23 of his best friends are about to install work that he and the public can enjoy with relish for the next full year. “These are the rules,” he says. “You really have to work for the artist. That,” he shrugs, “is it.”

Tractor Factor: Patrick Amiot’s whimsy will of course be showcased.

The lure of the three-dimensional will be almost impossible to escape this summer, not to mention the 50 images of that round-headed kid placed everywhere. Charlie Brown aside, here is a short list of what to look forward as “Sculpture Sonoma” unfolds: