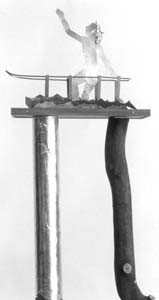 THE THIRD DIMENSION is, by definition, vital to the art of sculpture. You can’t hang most of the work produced by Rodin or Calder conveniently up on a wall behind your couch, and The Kiss or Gate of Hell will never seem like discreetly decorative accessories. Sculpture sticks up, bulges out, and thrusts its way forward into the world.

In short, the art form tends to take up space.

Now, thanks to the Sebastopol City Council, it has all the room it could want. Just in time for the Sebastopol Center for the Arts’ second annual Sculpture Jam, the council has approved four city-owned sites to publicly display six works to be produced by 22 local sculptors during the event.

Sculpture Jam, which takes place this year from Oct. 7 to Oct. 9, features six groups of artists, including such luminaries as Ron Rodgers and the event’s founder, Warren Arnold, wielding their hammers,chisels, and PVC pipe in full view of the curious public.

The event, which last year drew some 1,200 people over three days to the old Diamond Lumber Yard on the plaza, is intended to give observers a chance to watch sculptors at work, to give folks a better idea of the how and the who behind the art of sculpture.

But Sculpture Jam also gives normally solitary artists a rare opportunity to collaborate with others–which apparently takes a little adjustment in some cases, according to Linda Galletta, executive director of the Sebastopol Center for the Arts.

“It’s been a challenge for the sculptors because they are such an individual lot,” Galletta says. “They spend a lot of time in the studio by themselves and they normally create by themselves, so to work with other artists is a challenge.”

But it’s apparently a challenge they enjoy: One of the participating sculptors told Galletta that solitary work had left him “feeling like a caveman” and that Sculpture Jam had given him an opportunity to “come out of his cave and work with other people.” Perhaps that’s why, of the 11 artists who participated in last year’s event, nine have returned.

“They’re very energized by it,” Galletta says. “They love having the public watch them work and learn about the process. They have developed wonderful friendships that lasted beyond [last year’s] event, and now many of them are sharing ideas and techniques.”

But this time out, the event will look different in one crucial respect: more women will be participating. Last year, there was only one female artist working among the cavemen. This year, there are two teams of women sculptors on the job.

“We made a real concerted attempt to broaden our horizons and make sure that women sculptors knew that they were invited to participate,” Galletta says. “They were last year, but they seemed to hang back a bit.”

Sites for the placement of the six sculptures–which will range from four to 14 feet in height–include the downtown plaza; a corner in front of Sebastopol Cinemas; the Sebastopol Fire Department; and Spooner Park, the triangular piece of land near Palm Drive Hospital where the four pieces created last year are now on display.

SUPPORT FOR THE EVENT comes from a variety of sources: The sculptors contribute time and materials, Sebastopol Redimix donated concrete for bases, and the Sonoma County Community Foundation helped underwrite the cost of materials and installation.

But it’s the City Council’s commitment to providing public space that may be the most crucial. The idea, Galletta says, is for the Sculpture Jam, which will return next year, to become the city’s major public art program.

“[The council has] encouraged us to continue looking for sites in Sebastopol both public and private to continue this program,” Galletta says. “They are excited about having art in Sebastopol and having it be an interesting place to visit and linger and think about.”

From the October 7-13, 1999 issue of the Sonoma County Independent.