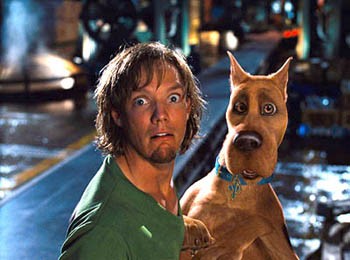 Rroo’s There? Matthew Lillard and his digitally-animated co-star hunt ghosts in ‘Scooby Doo.’

Pushing the buttons of the King of Television trivia

I am sitting here with the phone pressed to my ear, an ear that has just been toasted crispy by the fiery, eloquent wrath of Paul Goebel, that Elvis-haired, side-burned, walking-encyclopedia otherwise known as The T.V. Geek. Fortunately for me, the freshly roused ire of Paul Goebel is not aimed specifically in my direction. But I am close enough to have been scorched by it; scorched and, I must admit, remarkably entertained. Then again, Paul Goebel is frequently entertaining–no matter his mood–as is demonstrated every night on Comedy Central’s hit game show Beat the Geeks.

On the addictively quirky series (starting its second full season of shows on July 8) Goebel joins a trio of other geeks (the Movie Geek, the Music Geek, etc.), glibly dismantling the egos of all contestants attempting to match wits with the reigning masters of pop culture trivia. Goebel, of Los Angeles, can also do a mean Tom Jones impersonation, but that’s another story.

For the last 30 minutes, we’ve been discussing Scooby Doo, the critically-pounded live-action movie based on the classic 1969 T.V. show “Scooby Doo, Where Are You?” For much of our conversation, Goebel (www.kingoftelevision.com) has been dissecting the film with a good deal of humor, pointing out all the places where the movie deviates from the simple premises of the original show.

“For one thing, there was no big chase scene with a groovy song playing behind it,” he starts out. “I really wanted to see that and it never happened.”

Goebel goes on to list at least a dozen similar differences: on T.V., there were never any actual supernatural occurrences, just creepy guys in rubber monster masks; though Scooby and Shaggy might have belched a time or two on television, they probably wouldn’t have engaged in the high-volume farting contest we are forced to witness in the film; and the famously good-natured Scooby Gang (Fred, Velma, Daphne and Shaggy) would never have allowed petty disagreements to split them up, as occurs at the start of the movie.

“For the first ten minutes, I sat there thinking, ‘Hey! This is great!'” Goebel says. “It was just like the original show. And then they broke up, and I was thinking, ‘Whoa. This isn’t right. This shouldn’t be happening. This sucks!’ It really bummed me out. I mean it, it made me sad. The Scooby Gang would not have done that.”

And I should have kept my mouth shut. Instead, I remark, laughing, “You know, there are probably people who would hear us and say, ‘Hey. So what if the movie changes a few things? So what if the Scooby Gang breaks up? It’s only a cartoon.'”

“So . . . their thinking is what? Because it’s a cartoon it doesn’t deserve any kind of respect?” Goebel finally replies. “Well, that kind of thinking has no place in my world. I’ve gotten into a million conversations about T.V. shows, conversations about the logic that operates within those shows, and always somebody thinks they’re clever by going, ‘Hey guys. It’s only a T.V. show.’ Drives me nuts.

“We know it’s a T.V. show, jackass,” Goebel goes on, just beginning to warm up. “To say that Scooby Doo is only a cartoon . . . well, Scooby Doo is more than a cartoon. He’s the most popular T.V. cartoon character ever. Every kid and adult in America knows who Scooby Doo is. He’s as popular as Barney or Elmo or Mickey Mouse or any other modern pop icon.

“So to say that it’s only a cartoon, to imply that because its a cartoon we shouldn’t take Scooby Doo seriously, is really an asinine thing to say. You might as well say, Star Wars was just a movie, Star Trek was just a T.V. show, Jesus was just a dude. I’m agnostic, but I don’t get in people’s faces when they’re talking about their religion. I don’t smirk and say, ‘Hey guys. Jesus was just a carpenter.’

“Those kind of people are just asses,” he adds, winding down. “They have no depth, and they have no soul.”

Goebel, 33, was two years old when Scooby Doo first hit the airwaves in 1969. “So obviously I’ve been watching it all my life,” he admits. “I have a lot of good Scooby Doo memories.” Goebel is able, off the top of his head, to list every Scooby Doo incarnation to hit the little screen since 1969–nearly a dozen of them–from Scooby Doo’s All Star Laff-a-Lympics to A Pup Named Scooby Doo. “My favorites were the New Scooby Doo Movies,” he says, with the animated celebrities, the Harlem Globetrotters, Laurel and Hardy, Tim Conway and Don Knotts. I always thought that was the coolest.”

As a seasoned Scooby Doo aficionado, Goebel can even weigh in on one of the series’ most enduring and hotly-debated controversies: namely, which of the shows females is hotter–Daphne or Velma.

“Velma always looked great in that tight red sweater,” he says. It’s no different in the movie, with Sarah Michelle Gellar (Buffy the Vampire Slayer) playing Daphne and Linda Cardellini (Freaks and Geeks) as Velma. “Velma is definitely hooter than Daphne in this movie,” Goebel insists. “Of course, I’ve been a huge fan of Linda Cardellini ever since Freaks and Geeks. She’s so beautiful and unassuming and such a real actress. I’m worried that this movie might put her into that awful, teen Selma Blair category. I hope she sticks with T.V. Women are always hotter on T.V.

“Of course,” he adds with a laugh, ìI guess I tend to think everything is better when it’s on T.V., whether it’s Linda Cardellini, Buffy the Vampire Slayer . . . or a big talking dog named Scooby Doo.”