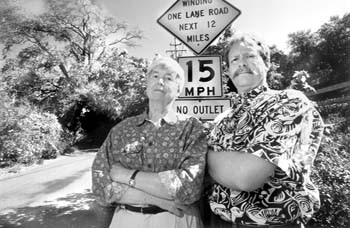 Road block up ahead: Mary Hafner and Tim Barnard are fighting a plan to run a Santa Rosa wastewater pipeline under a country lane in Healdsburg. An alternative plan faces equal opposition from other forces.

BILL KRECK took out his calculator one day recently and started punching in numbers involving 11 million gallons of water–the amount of wastewater Santa Rosa generates every day and has a heck of time getting rid of. “That water would fill a 99-mile-long fish tank, three feet high, one foot wide. Or take a fully loaded 747 airplane: It weighs about 830,000 pounds. One hundred and eight of those planes equal one day of wastewater in weight,” Kreck figures.

“That’s so much water it’s hard for people to understand. And to me [the city] is just pumping it down a gopher hole.”

After more than 15 years of debate and millions of dollars in studies, the Santa Rosa City Council voted last year to send its highly treated–practically potable, in fact–wastewater to the Geysers, a steam field high in the Mayacamas Mountains 12 miles northeast of Healdsburg. The decision to spend $88.5 million on a 41-mile pipeline to deliver water and turn it into steam-generated electricity has sparked lawsuits and intense criticism from farmers, residents, and environmentalists.

On May 6, the City Council will host the next in a series of public hearings to discuss the environmental effects of the plan.

“We look at [the pipeline] as an absolute waste of a valuable natural resource,” says Kreck, an Alexander Valley resident whose home is near one of two proposed pipeline routes. “The water is treated to a [high] level; it’s not just toilet water. It’s good usable water.”

Kreck is a member of the Alexander Valley Association, which has sued the city over the project, charging that the environmental report was flawed in analyzing the impact of the pipeline as it snakes through the steep vineyard-studded hills of the valley. The lawsuit, however, has little to do with the environment or even the pipeline. Alexander Valley residents and growers aren’t NIMBYs–far from it. They would be delighted to have the pipeline in their backyards as long as it deposits the water in their backyards as well.

“The travesty is that the city is spending millions of dollars of ratepayers’ money to treat water to a tertiary level, then put it in a hole in the ground instead of using it for the main industry in the county, which is agriculture,” says Tim Barnard, an artist and president of the Alexander Valley Association.

The city also is facing a lawsuit from the National Audubon Society, which objects to the pipeline slicing through the organization’s 1,400-acre Mayacamas Mountain Sanctuary.

WASTEWATER is the Pandora’s box of Santa Rosa. Open the lid and a plethora of acrimony, dissatisfaction, and litigation pours out. In 1985, after a series of accidental discharges of sewage into the Russian River, state water-quality officials ordered the city to find a long-term solution to its wastewater woes. In the interim, the city continued–and continues to this day–to dump treated wastewater into the river. Seven years after the state order, a Superior Court judge ruled inadequate a $4 million study that resulted in the city selecting an unpopular west county agricultural irrigation project.

The city started all over again with a $15 million study that proffered several options, ranging from the increased dumping of treated wastewater into the river, to using it for agriculture, to sending it to the Geysers.

“Sending it up to the Geysers, that was one that was so ridiculous that almost nobody paid attention to it,” Kreck says.

But, speculates Barnard, then-Rep. Frank Riggs, R-Windsor, found an opportunity to score points in Washington by pursuing a green-energy source and securing a $350,000 federal grant to study ways to reduce the cost of reusing the water at the Geysers.

Assistant Santa Rosa City Manager Ed Brauner says that the city also did cost-reduction studies on agricultural reuse, but that cost estimates still “came in much higher than the Geysers, in the $200 million range and up.

“I think that commitment would have come, but when we were going through the process, there wasn’t a large group saying they wanted to use it.”

Currently the city uses wastewater to irrigate about 6,000 acres of land, including 1,200 acres of city-owned recreation- and ag-related property. The city encourages farmers to use as much water as they can, Brauner says, “because we have a need to get rid of it.”

All that will change with the water going to the Geysers utility consortium, which wants all 11 million gallons a day to create the steam that generates electricity. The only time there will be enough water left over for ag uses is during winter, when it is least needed by farmers. In an effort to appease the ag contingent, the city budgeted $30 million to pay for infrastructure to deliver water to farmers. But growers would have to pay for the pipeline and facilities to store water for use during the growing season.

Many growers, however, aren’t mollified by the compromise. “I’m not satisfied that the Geysers should steal that water. We want year-round water for agriculture,” says environmental leader Bill Kortum, a Penngrove resident and retired dairy veterinarian who has been a longtime proponent of reusing the water for south county agriculture.

“You get all the advantages of open space that the public is proud to see because they are helping deliver water to it.

“Anytime [the city] wants to come to south county, we’ll take all of the water,” he adds. “We can probably do a project much cheaper than the Geysers.”

Santa Rosa City Councilwoman Noreen Evans, one of two dissenting votes on the Geysers contract, agrees that agriculture is a better use for wastewater.

“I don’t think [the Geysers] is a bad thing to do. I just think that there are better and more reliable ways to deal with the water,” she says. “There have been a lot of political battles on many fronts. When the Geysers came along, I think a lot of people breathed a sigh of relief that it was over.”

ACCORDING to Kreck, the real problem with the Geysers is one of future water shortages. “Right now you have more water in the [Russian] River than legal rights to the river. But when they start cutting back on Eel River diversions, the remaining water is going to fall below the cumulative rights of people who have access to the water.

“That’s when the knife fights are going to start,” he adds. “When people turn on the pumps and start sucking air, that’s when the lawsuits come. When that times comes, I would not want to be sitting on the Santa Rosa City Council. It’s going to be pointed out, Why did you send all this water to the Geysers and now everyone’s suing each other?”

Kreck hopes that the Alexander Valley Association’s lawsuit will give the City Council “a real out.”

“The city can’t renege on the Geysers contract, but they can lose the lawsuit,” he says. “It opens the door. That’s where the growers are coming in.”

Although the ink on the Geysers contract is long dry, and the city is busy conducting a series of public meetings on the exact pipeline route, it’s clear that agricultural interests are far from giving up.

“We’re not through with the Geysers yet,” Kortum says. “They haven’t dug any dirt.”

The Santa Rosa City Council will hold a public hearing Thursday, May 6, at 4 p.m. on the draft supplemental EIR on the Geysers southern section, at the City Council chambers, 100 Santa Rosa Ave. Additional Geysers meetings are scheduled for May 20 and June 17. For details, call the city Community Development Dept. at 543-3181.