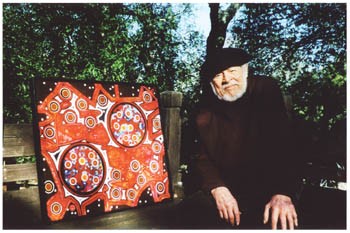 Mountain Man: Robert McChesney pictured with one of his paintings, at home on Sonoma Mountain.

Now well into his hale 90s, Sonoma Mountain painter Robert McChesney retains a vigorous connection to the world. It’s his own world, after all, the one he creates on wood panels with oil paint, sand, crackled glass and even bone.

Exhibiting “The Galaxy Series and Other Paintings” at the Quicksilver Mine Co. through July 17, McChesney shows 12 large canvases ranging in age of conception from 1966 to 2004. Firmly insisting that he is an abstract artist rather than a non-objective one, McChesney found his way to his craft through San Francisco abstract expressionist explosion that followed WW II.

McChesney, a former merchant marine who worked as a muralist for the WPA, emigrated to Mexico for a year and taught at the California Labor School as well as the California School of Fine Arts, is a contemporary of such artists as the irascible Clyfford Still, linear master Richard Diebenkorn, the painter and sculptor Manuel Neri and the great Healdsburg artist Horst Trave. His canvases remain stubbornly and forcefully committed to the original vision of energy, chaos and form that made abstract expressionism so kinetic and virile when it first shocked a generation some 60 years ago.

Married to the sculptor and writer Mary Fuller McChesney–whose book on the San Francisco movement, Period of Exploration, defined the time for many scholars–“Mac” built a bohemian paradise on Sonoma Mountain when the couple bought land there in 1952. From such artistic stability, the two have been ceaselessly working since.

The “Galaxy” show both references the wheeling firmament and the tight binding of infinite space found in biology. McChesney’s forms are circular and familiar, the colors mainly based on the elemental tones of blood. McChesney achieves a freedom, an easy rhythm, to his work that’s best evidenced in this show with the painting Arena #35, a panel that fairly sparkles with the sand laid down as a cool cream base, the forms and colors melded atop subtly bleeding toward and away from each other. Named in Spanish for stars and explosions, the majority of the other works in “Galaxy” are more mannered and have a pleasing quality that is nearly reminiscent of Indonesian batik patterns.

Always informed by nature, McChesney includes two of his iconic bone assemblages. Bones #28 boasts a crucifix of skeletal deer parts bursting from amid cracked glass, forever adhered to a blackened recessed panel, creating a creepy/lovely harmony that has its own sweet internal grace. Unfortunately, its counterpart Estrellas de la Noche #29, does not. One wonders why McChesney chose to include this jarring assemblage of gaudily painted bone, hairy sisal fiber and old polyester strips in what is otherwise an elegant capsule of a long and important career. But one piece out of a dozen doesn’t mar an entire show of such organic beauties as McChesney continues to make.

While McChesney grandly holds forth in the main room, Santa Rosa fabric artist Virginia R. Harris shows a small swathe of her rebellious, jewel-toned, hugely patriotic and man-she’s-mad work on the adjacent walls. A quilter recently moved to the North Bay from the San Jose area, Harris uses the gentle, homely medium of the quilt to rip the Bush administration, reconsider the hateful rhymes of racism, reclaim an American vision that makes sense to the disenfranchised left and to craft small hangings that make no statement other than as deeply pleasing artifacts to the eye. A former chemical analyst and nonprofit executive who took up quilting as a third career, Harris’ work is rooted in African textiles and traditions but might feature such terrifying images as the face of Dick Cheney. Among the many great things to look at within Quicksilver, Harris’ quilt art is nothing short of riveting.