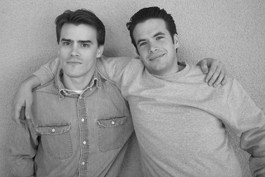 Kerouac bursts into life in SSF's brilliant 'On the Road'

Those words, attributed to the fever-brained poet Carlo Marx in Jack Kerouac’s On the Road, were written to describe the beatnik’s view of the universe in the disjointed, bomb-happy, communist-crazed postwar America of the 1950s. They are also the perfect description of the novel On the Road itself, and even more so of the play by Johnny Simons, launched last weekend in its West Coast debut at the outdoor Sebastopol Shakespeare Festival in Ives Park. Crazy, cock-eyed and extremely strange, this On the Road is also explosive, dynamic, inventive, hypnotic, ecstatic, unhinged—and exhilarating, instantly recognizable as one of the best and freshest shows of 2008, with an impressive cast that magnificently capture the lyrical cadences and outsized attitude of Kerouac’s words and world.

The very notion of anyone creating a stage play out of Jack Kerouac’s On the Road might seem, at first, to be an audacious and unfortunate folly. To many, On the Road is as sacred a text as any employed by a major world religion. Written in 1951, the thinly fictionalized autobiography was not published until 1957, but when it finally hit the bookstores, it was an immediate sensation, hailed by critics as an important example of Beat Generation literature, railed against by moralists decrying its celebration of alcohol, drug use and casual sex, and embraced like a warm and slightly sticky blanket, not only by the generation of young Americans it described, but also by the next generation of disaffected freethinkers, social anarchists and hippies who would look to On the Road as a kind of primer on living. In this new stage adaptation, creatively directed by Scott Phillips with a finely tuned eye and ear, the playwright, director and artists not only avoid the threatened doom of adapting such a work to the stage, they embrace the danger and use it in every moment, movement and line.

Sal Paradise (Kerouac’s alter ego), played by Ryan Schmidt with a graceful, easygoing sense of hunger, is a slightly nerdy writer whose life is changed when he meets wildman hedonist Dean Moriarty, played by Sonoma County Rep staple Ben Stowe with a physical commitment and emotional energy that nearly obliterates the stage every time he appears. In Puritan days, one might claim the actor was possessed, so completely does Stowe—usually given calmer, quieter roles—allow himself to embody this morally unhinged dreamer. Along with Moriarty’s new wife, Laura (Alice Grindling), the boys hit the road in search of “kicks,” driving in Moriarty’s red Hudson, which is seen only in the painting that looms over the set, along with other appropriately iconic images.

Along the way, they meet mutual friend and fellow writer-intellectual Carlo Marx, brilliantly played by Miyaka Cochrane as someone whose brain contains so many electrifying ideas and explorations that his body can barely contain the energy of it all. There are plenty of other characters on the road: Moriarty’s other lover, Camille (Laura Tennyson); goofy layabout Ed Dunkel (Samson Hood); Dunkel’s surprisingly strong-willed wife, Galatea (Karen Hanson); and the imposing Old Bull Lee (Eric Burke), a New Orleans writer and drug dispenser revered by Paradise as a kind of mentor.

Played by Burke as a contrary blend of curmudgeon and gourmet, Lee savors his seriousness as he dispenses bitter wisdom to the young beatniks whose adoration he simultaneously despises and delights in. It’s one more in a strong string of performances this year by Burke (last seen in True West), proving that whether he’s a lead or a supporting role, he is one of the North Bay’s finest actors.

If the acting and direction are the sizzle of the show, then Kerouac’s words are the steak, and the script absolutely drips with the juicy joy of his language. Kerouac, in his life as well as his writing, endeavored to embody a Zen-like devotion to being “in the moment.” Such an existence brings as many kicks in the head as it brings the sought-after “kicks,” and the play is not all Beatnik fun and games. Ultimately, the point of the play is the same principle that Kerouac learned early in his life and expressed over and over throughout his career: “Life is holy, and every moment is precious.”