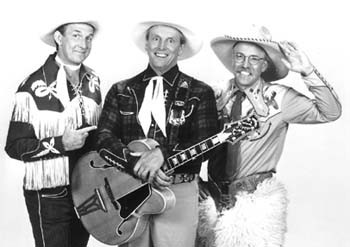 Riders in the Sky

Yee haw: Riders in the Sky bring their irreverent down-home wit to the LBC on Friday, March 27.

IT SOUNDS LIKE the beginning of a joke. Three guys meet in a bar, one of them an expert in wildlife management, another a brilliant writer and historian, and the last a scientist with a Ph.D. in plasma physics from MIT. Suddenly the first guy turns to the others and says, “Hey! Wouldn’t it be fun to dress up like cowboys and sing old Roy Rogers songs and yodel and stuff?”

And before they know it, 20 years have gone by, and some writer is describing their origin by saying that it sounds like the beginning of a joke.

Take it from Fred LaBour–otherwise known as Too Slim, one of the founding members of the Riders in the Sky–the only joke was the one on any shortsighted skeptics who might have suggested that this talented trio’s distinctly offbeat novelty act might never stand the test of time. On Nov. 11, on the stage of Nashville’s Grand Old Opry, the Riders–composed of Too Slim (the wildlife expert, whose earlier claim to fame was as the college journalist who started the “Paul McCartney is dead” rumor), Ranger Doug (historian Doug Green), and physicist-turned-fiddler Woody Paul (Woodrow Paul)–laughed their way through a night-long celebration marking exactly 7,300 days, dozens of albums, and over 3,000 performances since the band first got together to sing such fare as “Tumbling Tumbleweeds” and “Happy Trails.”

With a veritable parade of tributes from some of country music’s brightest lights–Garth Brooks, Kathy Mattea, and Reba McEntire–the evening was capped off with the emotional reading of letters from Gene Autry, Dale Evans, and the King of the Cowboys himself, Roy Rogers.

“That was so cool,” exclaims Too Slim, speaking by phone from the front porch of his “bunkhouse” in Tennessee. “We got on the bus the next day and Ranger Doug said, ‘Well, that was about the coolest thing that ever happened to us.’ And I totally agree. There were people there from around the country, people we’ve known throughout our career, and then those letters from Gene and Dale and Roy. It just gave us all a tremendous feeling.

“And we owe it all to sheer orneriness,” he laughs. “Choosing, in 1977, to make a living out of doing cowboy music–in the face of all reason and logic.”

The Riders, who are fond of calling themselves “the most overeducated act in the business,” will be stopping by Santa Rosa’s Luther Burbank Center next week as part of the 20th Anniversary Tour that is shaping up to be one of the team’s biggest years yet. The tour follows, more or less, the release of the group’s latest CD, Public Cowboy, No. 1: The Music of Gene Autry (Rounder), and Ranger Doug’s solo debut Songs of the Sage (Warner).

Asked if all this talk about 20 years in the business makes him feel old–or just proud–Too Slim lets loose with a loud, long laugh. “I commit the sin of pride, I guess, when I think of stickin’ it out all this time,” he ultimately says. “But on the other hand, it’s such a natural thing for us to do. I wouldn’t want to do anything else.

“I have been lookin’ back at old pictures from when we started out,” he admits. “We had hair back then! It was brown and lustrous. Now we’re a little balder, a little grayer, and a little more paunched out. But the music never gets old. It’s as heartwarming and exciting as when we first heard those songs growing up.”

If he has not grown tired of playing cowboy all these years, is he at all surprised that the Riders’ respectfully tongue-in-cheek style has taken them this far?

“Well, Ranger Doug says he’s continually surprised that people will pay to see what we do,” he replies. “But I never have been. I knew from the first day we were onstage together. We laughed so hard and had so much fun that three days later I was still laughing. I called up Ranger Doug and I said, ‘America will pay to see this. I don’t know what it is we did exactly, but I know people will want to see it.'”

THOUGH THEIR PATH has so far just skirted mainstream success, Too Slim says they’ve enjoyed plenty of high points along the way: playing for the president at a White House barbecue two years ago, performing at the opening of the Olympic Village for the Atlanta games, becoming members of the Grand Old Opry, doing the TV show, and doing their ongoing Riders Radio Theater program on National Public Radio.

“We’re doing the Barney show next week,” he laughs. “No kidding. We’re all looking forward to trying out our Barney impressions on the real guy.

“I’ve said before, though,” he continues, “that the personal high point of my career was walking into a room where Roy Rogers was standing, and having him know who I was. Roy Rogers looked up and said, ‘Hey! It’s Too Slim.’ I lit right up and haven’t dimmed down yet.

“I mean to tell you, you can’t beat that,” he audibly beams. “Getting to meet your heroes, gettin’ to work with them sometimes. No doubt about it, our dreams just keep on comin’ true.”

And that’s no joke.