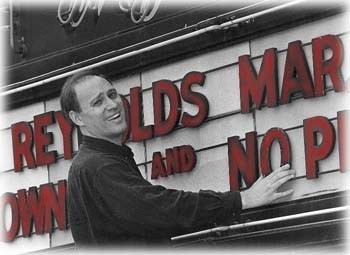 Riding High: After several years out of the national limelight, Rick Reynolds is preparing for a new network TV sitcom.

Seven years ago, comedian Rick Reynolds was a star on the rise. Now, after hiding out in Egg City, he’s preparing for a network TV spot

ASK RICK REYNOLDS about the appeal of quiet, small-town Petaluma in the North Bay, and this fast-talking Emmy-nominated comic launches into a rapid-fire spiel that sounds as though it was scripted by the local Chamber of Commerce. “The biggest allure for me, I think, is being around ordinary people–real people–because this second show is from the dramatic events of my life,” says Reynolds, whose 1990 one-man comedy show “Only the Truth is Funny” was hailed for blurring the lines between traditional lowbrow stand-up and the allegedly more exalted realm of art.

“That’s why it’s taken me so long to do the follow-up–I’ve been waiting for shit to happen.”

Two years ago year, Reynolds, 42, debuted his new one-man comedy show, “All Grown Up–And No Place to Go,” at the Mystic Theatre in Petaluma. The show, which opened last spring in San Francisco and once again put reynolds in the limelight, picks up where the first one left off, with Reynolds in a mid-life crisis and ruminating on parenthood, his brush with success, and the difficulties of being an adult.

This week, Rhino Records is set to release a two-CD version of the performance (it also includes a 25-minute bonus track called “Life, Kids, Marriage, and Stuff”), setting the stage for Reynolds’ return in March to network TV and a new sitcom, “Life . . . and Stuff,” co-starring Pam Dawbar. It airs on CBS.

“In ‘All Grown Up . . .’, it just dawned on me that most people are unhappy,” says Reynolds, leaning back in a comfortable leather desk chair at his Victorian office overlooking downtown Petaluma. As he speaks, Reynolds is perched in front of a flickering computer screen and surrounded by a vast collection of vintage pulp-fiction books, Beatles dolls, and other memorabilia.

“We live with this emotional pain that we never talk about,” he continues. “In my case it comes from the pressures of a relationship and kids, and the irony not only of the huge love and satisfaction that brings you, but also the amount of work and frustration. I’m unhappy a lot. And I talk to my friends, and they’re unhappy. And I go, ‘Is my circle of friends so different from the world?’

“I say in the show, we all dress up, we put on our happy faces, and we fool everybody into believing that we’re happy together. And everybody else fools us. So everybody is left isolated, thinking, ‘Something is wrong with me; I’m the one whose life sucks.” I think it helps just knowing that everybody’s life sucks.

In his first show, this insightful monologist–whose pathos-ridden, highly confessional work has put him in the same league as Spalding Gray, Lily Tomlin, and Eric Bogasian–struck a nerve with every comedy fan who ever fretted over growing up in a dysfunctional family. “Only the Truth Is Funny,” a humorous sentimental journey into his world, opened in San Francisco in 1990 to rave reviews before moving to New York and catching the eye of Rollins & Joffe, the high-powered management team behind Woody Allen, David Letterman, and Robin Williams.

In 1991, the show played a successful six-week run in Los Angeles. Hollywood’s elite flocked to the shows. Bette Midler came to see it. Steven Spielberg sent Reynolds 20 pounds of fudge after the comic mentioned onstage his passion for the gooey confection.

The show’s huge success led to a book deal, Only the Truth Is Funny: My Family and How I Survived It (Hyperion, 1991), and a Showtime cable special. NBC-TV signed him to a $750,000 development deal, which resulted in an unaired sitcom pilot and an offer to stick around to create other new shows.

But Reynolds ended his association with Rollins & Joffe, packed his bags, and returned to Petaluma, where he had relocated about seven years ago and now lives in a spotless old Victorian with his wife, Lisa Ludwigsen, and their two young children. “This was a period that a lot of people who are struggling would kill for,” he reflects. “I mention in the show how ironic it was that my marriage started to fall apart right as this happened. Every night in L.A., I would say, ‘Who’s here tonight?’ And somebody would say that Jack Nicholson was the first one to shoot to his feet and give me a standing ovation. And then backstage one night, Carl Reiner, Mel Brooks, and Anne Bancroft in tears giving me hugs. Mary Tyler Moore, Lily Tomlin. Just tons of things. Unforgettable.”

But the strain of maintaining that pace nearly destroyed his marriage. “You know, I fell out of love with my wife, it got very sad, it got very ugly,” he says candidly. “We’re in therapy; I’ve learned things. I did the new show one week in a stand-up club in Seattle, just to kind of get it on its legs And I was amazed, especially when I did the therapy stuff: couples looking at each other, laughing at the setups. Laughing at me–or laughing with me–or clapping for me.

Yet Reynolds now must contend with the additional worry of no longer being the freshest face in show biz. “I want to talk about this issue,” he says. “I mentioned that in the first show. What will people say? Will they say, ‘He’s repeating himself’? I worry about the reviews, only because the reviews are very important to having a successful run. I remember all these people loving this new voice. You’re going to discover that it’s the same voice. It’s the new voice you loved before, but it’s the same voice.

“Hopefully, [the new sitcom] will be a success. You hate to have a big success and then failure,” he adds. “And that’s the problem with the higher you go. Who in show business is just like this? Everybody. Marlon Brando. He came back up, sort of. But, you know, everybody falls. Where’s Kevin Costner now? Three failures in a row. Biggest thing in the world. Then boom! Every time I see ‘the new blond bombshell,’ I think, “She’s going to be so depressed for most of her life.

“So I worry because I just don’t want it to be compared that much to the first show. I want it to stand on its own.”

A web exclusive to the February 13-19, 1997 issue of the Sonoma County Independent