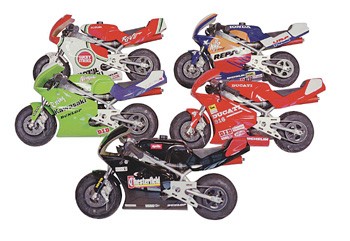 Minimotos: Is the scare worth the fun?

They’re baaack! What with the warmish weather, that insect noise that fools me into thinking my cell phone’s vibrating can only mean one thing: pocket bikes. It’s a common sight around urban and suburban neighborhoodsgrown men riding tiny little motorcycles.

For those of you who have no idea what I’m talking about, first picture a crotch-high rocket motorcycle, one of those bright ones that look like candy and come in an array of neon colors shrunk down to an eighth its regular size. Then picture big adult men (and gangly teenagers) mounting the things, knees akimbo, hunkered over, zooming down the street at 30 mph-plus.

These pocket bikes, also called minimotos, usually have six-inch wheels and a two-stroke engine, like the kind found in a lawnmower. That’s why the bikes are so loud–and smelly. The trend of little motorcycles started in Japan in the 1970s. Since then, it’s captured the imagination of Italians (who build many of the nicest minimotos, costing thousands of dollars) and now Americans (who usually buy cheap bikes from China at around $400).

One of the first questions with pocket bikes (after “Why do they exist?”) is: Are they safe? Pocket bikes happen to be the same exact height as the bumper of a car, perfect for being invisible to most drivers, and perfect for getting lodged underneath a car and its wheels. So, no, I wouldn’t call them safe. Because of these safety concerns (and noise complaints), California police are handing out tickets to discourage using the bikes on city streets. Usually the drivers don’t have M1 licenses, don’t have insurance or get caught driving the little guys on the sidewalk (a no-no). The bikes are supposed to be taken out onto private property or paved closed-circuit racetracks.

As for the question of why one would drive one of these mini motorcycles, ask any man (and they’re almost all men) why he needs any automotive toy. They’re fast even though they’re small. They really take off. It’s fun, and different and you can race them. There are racetracks and pocket bike grand prix held in places like Fremont and Vellejo, and Woodburn, Ore.

Brian Hall, owner of Thunderstruck Motors, has been converting minimotos to run on electricity for seven years now. He’s no different than the two-stroke fans with his love of pocket bikes. “You get an adrenaline rush when you take off and pop a wheelie,” he says by phone from his company’s Santa Rosa headquarters. He introduced me to NEDRA–that is, the National Electric Drag Racing Association. Yes, Harold, there are electric vehicle drag racers. Thunderstruck can take any gas-powered minimoto (or any gas-powered vehicle, really), make it a plug-in electric and not lose the speed.

Why would someone do that? Well, as a matter of fact, the electric pocket bikes tend to be faster than their gas-powered counterparts. “The Pocketech engine is totally awesome,” Hall says, referring to his shop’s custom pocket bike, which can go up to 60 mph. The other cool thing about electric pocket bikes is that they are less illegal than gas minimotos; that is, according to California Vehicle Code 405, gas-powered pocket bikes fall under the motor-driven cycle category, while electric are considered motorized bicycles under code 406-a. Since they are motorized bicycles, you can “drive” them in bike lanes and with traffic, as long as you stay below 25 mph.

The irony is that although the electric versions are more legal, being silent, they are even less likely to be seen by cars. Thunderstruck makes a slightly taller version of a minimoto called the Jackal, which Hall describes as being more comfortable–and probably more safe. They cost around $3,400 and use bicycle parts. What a great beast!

As fun as these bikes may be, the dangers don’t seem to make it worth it. I will say, however, that I recently heard a pocket bike roaring around my neighborhood. I looked out the window and saw, much to my delight, a midget man astride one of the tiny beasts, wearing the biggest grin I had ever seen. How perfect.

She’s trend-watching for you. E-mail Novella at [email protected]