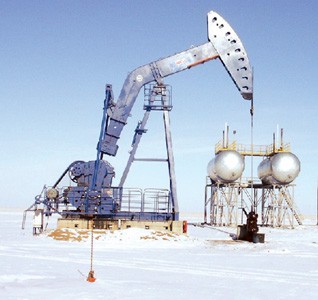 The great thing about living in the Bay Area is that there are a million public lectures and talks going on. Take your pick: Got a passing interest in healing with mushrooms? Need all of your questions answered about Bhutan in one slide-show presentation? Around here, you’ll probably find it.

Along those lines, I sat in on a brown-bag lunch discussion led by David Goldwyn, Clinton’s Assistant Secretary of Energy. These days, Goldwyn has become, like all good former public officials, a consultant. He has also recently edited a collection of essays called Energy and Security: Toward a New Foreign Policy Strategy.

The title of his talk was “Bush Energy Policy: Visionary or Snake Oil?” Any time a talk covers snake oil, I am so there. Goldwyn began with a PowerPoint presentation that showed that 39 percent of the world’s consumption of energy is petroleum oil. Twenty-nine percent of that is used by the United States.

But countries like China, as they “develop,” will soon use just as much as Americans. Because of this increased development and population growth, it is projected that by 2030 we will need to double the number of barrels of oil produced. This is why Bush got onstage for the State of the Union and proclaimed that we’re addicted to oil. His plan included (1) replacing 75 percent of the oil imports from the Middle East; (2) a 22 percent increase in clean energy research; (3) ethanol cellulosic research; (4) and research in hydrogen. Point by point, I’ll walk you through it. (1) Oil is a commodity. If the United States replaced 75 percent of its Middle Eastern oil intake, someone else will buy it anyway. Snake oil.

(2) Bush actually cut overall energy spending in order to raise the research and development dollars. And what are the folks in R&D going to do? Twiddle their thumbs and spend money. Snake oil.

(3) Though cellulosic ethanol (fuel made from corn stalks, not corn) would be great in theory, Bush has unfortunately added research money but cut deployment dollars. See above.

(4) Hydrogen. More funding, significant international cooperation. However, the fear is that nuclear power will be used to generate the hydrogen. Goldwyn calls it “semivisionary.”

Goldwyn has a few ideas that he thinks would work better, namely, a gas tax. “On Sept. 12, 2001, if George Bush had said to people, ‘This is a sacrifice I want you to make in order to make America safe: a 50-cent gas tax,’ people would have been glad to do something,” Goldwyn theorized. “But now that time has passed.” He thinks a gas tax would make the Saudis angry because we’re asking for more oil but increasing the price to lower demand.

But the real point of Goldwyn’s talk was to scare us. “If Iran turned off the oil spigot, it would almost undoubtedly cause a recession in the United States,” Goldwyn said. See, our thirst for oil makes us vulnerable, hence the whole security issue. He also pointed out that because China and India will soon become the biggest buyers of oil, they will actually wield more power.

Eventually, according to Goldwyn, if things keep going this way, the United States won’t be able to muster much pull in the global scene because we won’t be able to threaten an oil embargo. Fear is the motivating factor that politician Goldwyn thinks is going to change America’s fuel-consuming patterns. He suggested an energy policy that focuses on deployment, not R&D (by removing earmarked funds), a national technology strategy and production credits for automakers making hydrogen/electric cars.

All ways encourage fuel saving, but not depending on what Goldwyn called “virtue.” He doesn’t believe that Americans would voluntarily sacrifice something by paying more money or lessening engine size. I call snake oil on that. Americans are looking around and seeing a world being destroyed by oil: the war in Iraq, poor air quality and global warming. I’m here to tell Mr. Goldwyn to tell the other politicians that, actually, I want to sacrifice something, I want to do something, anything, to alleviate this terrible stress on the world. And I think other people feel the same way. We need leaders who will help us make glad sacrifices. Right?