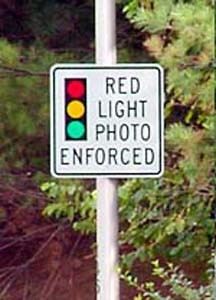 Bill’s in the doghouse. Today’s mail included a ticket with a photo of our car’s license plate. I asked him about it, and he said, “Let’s talk about that later,” which is code for “never.” Turned out he tried to go through a toll bridge using his friend’s toll-paying device. My question is, how did the machine know the toll-paying device was on the wrong car? I have a feeling the machines are getting smarter and smarter these days.

Take, for instance, the so-called red-light cameras. According to the geeky How Stuff Works website, red-light cameras work by using induction loop triggers. There are cameras mounted on the traffic lights with a computer connected to the cameras. And down below, under the asphalt, are thin loops of electrical wire.

When your car drives through the electromagnetic field generated by the loops of wire, something called inductance levels increase. The computer recognizes a shift in the inductance level, which causes the computer to tell the cameras to take a photo. In most areas, the red-light cameras take two photos–one frontal to get a shot of the driver’s face, and one behind to get the license plate.

Not all red-light cameras work on this principle–some use lasers, others use something called a video loop. The computer reads a video feed from the intersection, and can “recognize” a car speeding through a red light. Either way, the computer notes the date and time of the incident and the police send you a bill. The cameras are on 24 hours a day and earn the city a tidy sum.

Though this can be frustrating for paranoid people like me–I mean, what’s next, tickets for jaywalking using facial-recognition patterns to identify us?–technology goes both ways. When we think of surveillance, we might imagine a faceless body taking in data that will later be used against us. But we can make the machines work for us, too.

Take, for example, the phenomenon of “regional messaging,” highway signs smart enough to warn drivers of congestion or disasters that might lie up ahead. In Florida, where some of the worst traffic in the nation can back up for miles, the Department of Transportation has come up with a network of highway surveillance cameras and a uniform coding system that warns drivers of congestion or accidents.

According to the Palm Beach Post, this new traffic management system has reduced delays by 30 percent in the last two years. The idea is to warn drivers early enough so that they can take a different route. In California, similar “thinking” signs will give estimates on travel times to areas along the highway. I’ve pulled over once because of a sign warning of a one-hour delay and took an ice cream break and a nap. Wow, the sign was my perfect enabler!

But why bother getting into your car when you can use webcams and other tools that let us monitor traffic real-time from our cushy desks and sofas? All over the country, more and more state agencies are erecting their very own traffic webcams. Some are better than others.

My favorite traffic webcams are in New York City. There, the Advanced Traveler Information System has been set up, which allows one to choose from a variety of locations that show streaming video feeds: the Brooklyn Bridge, Fifth Avenue, Amsterdam Avenue. At 1am, the cabs are clogging the streets, there’s a mist of pollution blowing across the screen, the neon lights fling themselves everywhere. If I squint, I can pretend I’m looking out the window of a tiny apartment in the Lower East Side.

In California and Arizona, home of terrible traffic, there’s www.sigalert.com. This is a cool site because it doesn’t use bandwidth-gouging images, but gives average speed estimates. During nontraffic times, there will be plenty of 70s and 80s, but congestion will be signaled by 20 mph and 30 mph listings. Sigalert also covers traffic accidents. On a hot map, they’ll show places where accidents occurred, and often details like “traffic collision: debris/objects” or “traffic hazards: vehicle” with the cross streets of the accident.

Suddenly, when we are the ones doing the monitoring, it seems all right.