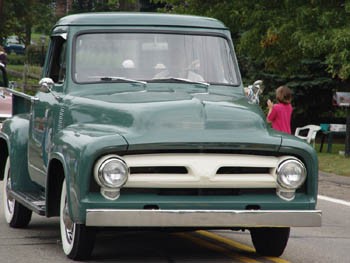 In praise of the solid, country pickup

I saw the Johnny Cash biopic Walk the Line on Tuesday, then Brokeback Mountain on Wednesday. Both were love stories, both were about rural country people and both made me cry like a baby. I never loved Cash (thinking that all of his songs sound the same), but after seeing Joaquin Phoenix play the Man in Black, I was willing to reconsider. As for gay cowboys, I never thought of them before, but hell, it just makes sense: men alone riding horses and looking fine, why not?

The other thing both movies featured were good old trucks. Now, I’m a sucker for a country pickup. I grew up riding in the back of a 1970 turquoise and white Ford F-100, leaning way out the side to catch thimbleberries that grew alongside the road that led up to our ranch in Idaho. We did the kinds of things that country people do: we mowed hay and swung the dusty bales into the back of the truck; we took the truck down to the Clearwater River to fish for trout; and my daddy kept his rifle on the rack in the back, just in case.

In Walk the Line, the truck that the Carter family drives is testament to their dyed-in-the-wool country ways. In one scene, after a successful tour, the Carter family arrives for Thanksgiving dinner at Johnny’s Hendersonville ranch in a simple, beat-up white Ford. I’m sure June was sitting in the middle seat, not complaining about the cramped set-up at all.

Pickup trucks and rural people go hand in hand. Most country-western singers have at least one song (or a whole career built around) songs about their trucks. Though Cash was always singing about trains, old-time favorites like Jerry Jeff Walker loved trucks and the truck lifestyle. In “Pick-Up Song” he sings, “Yeah, I used to look forward to Saturdays when me and my grandpa’d get away / I’d be in his pick-up truck and we’d go to town we had a couple chores that we had to do / It didn’t take long ‘fore we were through / Then we let the pick up truck just wander around.”

There’s also Johnny Paycheck’s “Ragged Old Truck.” These are classics sung by classic country crooners. Of course, the new guys, like the one-hit wonder Rhett Atkins and his “That Ain’t My Truck” song, continue the tradition while wearing headset microphones onstage.

I think of trucks as being the ultimate country vehicle because of what they say about the people who drive them. I love the way that old country singers all know each other and in many ways support one another. Of course they drive trucks. Can you move a sofa with a sedan? Haul hay in a convertible? Load your beehives in a station wagon? No.

Brokeback Mountain highlights 20 years of two men’s love for each other, and 20 years of country pickup trucks. Ang Lee did a great job of making sure that no prop was anachronistic. In the beginning, 1963, the main character, Jack Twist, is driving a piece-of-crap 1940s classic Chevy (probably now worth thousands). By the end of the movie, he’s driving a brand new Silverado . . . I think. (I must confess, I wasn’t completely paying attention to the trucks, what with Jake Gyllenhaal’s eyes and such.)

Heath Ledger’s character, Ennis Del Mar, drives the same truck throughout the movie, as an indication of his impoverished ways. But by God, he could haul two horses in the back of that vehicle, and that was a beautiful thing.

Though I’ve never been much of a classic-car gal (I usually snicker under my hand at those vintage-car-show guys with their suspenders and ZZ Top beards), but classic trucks–that’s where it’s at. Sure, a 2005 Dodge Ram 2500 might be a good work truck, but if I bought a truck it would have to be old. Give me a 1950 Chevy shortbox with that enormous hood and the split windows, or a 1958 Dodge D-100–which is, by the way, more of a lady’s truck. But please, don’t lower it and don’t paint it some ridiculous color either. Primer’s fine with me.