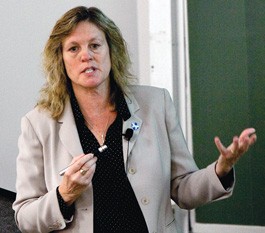 “If you’ve been sick for 10 years, 20 years, 30 years, and you’ve been to all kind of doctors and you can’t seem to get well, these people are desperate to find what might be the key to helping them,” says Tom Klaber. “For some of them, XMRV could be just the thing.”

Klaber, a principal at Santa Rosa consulting company Bridge Medicine & Health, has been instrumental in bringing Dr. Judy Mikovits to Sonoma County. Mikovits is the lead author of a 2009 paper published in Science Magazine showing that more than 70 percent of patients diagnosed with chronic fatigue syndrome also tested positive for XMRV, a human retrovirus discovered in 2006. One of only three known retroviruses (HIV being another), the discovery may hold the key to unlocking the mysteries of many illnesses, including prostrate cancer, fatigue, lymphoma, multiple sclerosis and autism.

Like medical theatrics straight out of a Michael Crichton novel, certain groups have challenged Mikovits’ claim that strong associations can be made between XMRV and cancer or other neuroimmune diseases. A study in England purported to find none of the retrovirus in blood samples, a claim later discredited when it was revealed that the researchers had used an entirely different method of testing from the original.

“[Mikovit’s paper] really upset a lot of apple carts,” says Klaber. “There were people with cherished beliefs about the cause of chronic fatigue were not happy. Ego, greed, prestige and power is as rampant in academia as anywhere else.”

Klaber encourages anyone suffering from chronic or debilitating illness to attend the public talk. “Significant numbers of people have chronic illness and just can’t feel happy,” he says. “XMRV is obviously playing a role for many of these people.”