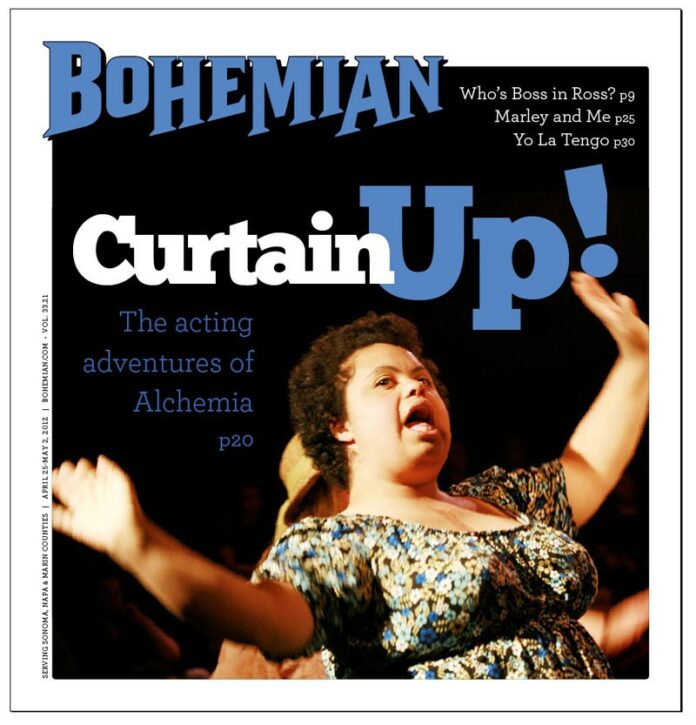 Reaching for the Stars

“OK everyone, let’s do this thing!”

Liz Jahren, program director of the Alchemia Theater for Life in Santa Rosa, gently guides an actor to her correct mark, then heads back to her seat, stopping to shove a black wooden box a few feet nearer to the center of the rehearsal room. All around her, 22 slightly nervous performers are finding their places. “Erica has to leave in half-an-hour,” Jahren reminds the cast, “so we have to stay really focused, right? We’re starting from where we left off at break-time, the first bully scene, right after Possibility.”

Erika Smallen, choreographer and dance instructor, sits among the actors as Jahren takes a seat near the piano. Musical director Brett Fenex plays a snippet of the song Possibility, one of several he has written for The Adventures of Pin Pin, the original show being rehearsed today.

As Fenex plays the melody, several performers begin to sing along:

For me to see you, and you to see me, we gotta be who we are!

Nobody knows how good it can be, until we reach for the stars!

Life’s an opportunity, rife with possibility!

“Can I have lunch with you?”

“Can I have lunch with you?”

Ahleli, 30, is playing the title part of Pin Pin, alternating performances with actor Danny, 22. She perches on the black wooden box, tentatively addressing the actors, all clustered here and there. As scripted, they pointedly turn their backs on poor Pin Pin, acting out a typical day on a typical schoolyard.

“Freeze!” shouts Michael, 30, one of two narrators, stepping in from the taped-off wings. When none of the actors stop what they are doing, Michael repeats the command. “Freeze!”

“Come on, people!” calls out Jahren, with comically wide eyes. “You heard the man! Freeze!” This time, everyone stops cold and hold their position.

“This is ‘social exclusion,’ a form of bullying,” adds Laura, 30, the other narrator, moving in beside Michael. “Unfreeze!”

Fenex slides into a bouncy and menacing piano riff, as another performer, Julie, 24, leads a quartet of rough and scary characters out onto the stage, punching the palm of her hand with one balled-up fist. These, clearly, are the primary bullies of the show.

“Look who’s sittin’ over there!” Julie snarls, pointing menacingly at Ahleli. “Let me to introduce you to my crew—Fear, Terror, Shame and Pain!”

“Good, Julie, good!” Jahren says, clapping her hands. “But I think you forgot to say ‘Oh ho ho!’ when you make your entrance.”

Julie grins, her make-believe tough-girl attitude melting from her face.

“I didn’t forget it,” she explains, matter-of-factly. “I just didn’t want to say it.”

Something in the way Julie says this strikes the entire room, including Julie, as hilarious. The resulting explosion of laughter is as much a release of nervous energy as anything else. Everyone knows that the show they are rehearsing—an original touring musical based loosely on the story of Pinocchio—will open in just three and a half weeks. There is still much to be done. Many of the actors don’t yet know their lines, their grasp of the choreography is still tentative, and everyone’s emotions—on and off the stage—are running high.

“It’s a little bit overwhelming,” Julie admits, during afternoon break. “But we’re real close to being ready. We all work real hard. And audiences like us. They really take us in, because they know this is how we show our talent. We’re artists, and audiences know that. We make art when we walk into a room. We make art when we make our own entrance. To me, that’s what Alchemia is all about.”

Funded by a generous grant from the California State Council on Developmental Disabilities, Theater for Life—along with Alchemia’s other programs, like the art gallery Artists Without Limits—was designed to meet the needs of adults with learning disabilities, Down syndrome, Asperger’s and other conditions, specifically targeting those who identify as artists. Currently, the cast of Pin Pin, which launches several months of touring on May 4, range in age from 22 to 35 years old.

“What distinguishes the Theater for Life program from other vocational work-oriented programs,” explains Jahren, who began as a theater instructor seven years ago, “is that our program encourages them to think of themselves as artists—because they are artists. For real. Some of our actors are huge divas. If it weren’t for their disability, they’d be rockin’ it in L.A. They are that good. So we provide a space for them to rock it right here.”

For Jahren, recognizing the performers as artists includes giving them a stipend for their work in shows like Pin Pin. The majority of donations collected at performances go to the actors.

In her office at Sixth Street, Jahren sits at her computer, calling up photos from past productions. Since joining Alchemia, her troupe of actors has presented Shakespeare’s Midsummer Night’s Dream, Aristophanes’ Lysistrata, and several original musicals, including Little Red, a play about stranger awareness that was toured to thousands of students in the North Bay.

The current show opens its tour with a four-performance run at Santa Rosa’s Glaser Center and then to the Studio at Sixth Street for several more performances. Jahren is still scheduling the rest of the show’s itinerary, which is expected to continue through spring and summer.

The Adventures of Pin Pin, which contains musical lessons about how to handle bullying, was inspired, in part, by one of Alchemia’s actors.

“Vince didn’t speak until he was five years old,” explains Jahren, “and when he did finally speak, he was speaking in complete sentences. One of the very first things he said to his mother was, ‘Mama, I am just like Pinocchio. I’m not a real boy!’ That’s how a lot of these artists feel, like the world doesn’t see them as one of them—so that was the genesis of this play.”

In the show, Vince, 22, plays a number of characters, including a playfully menacing cheetah with hip-hop moves.

“When I first came here, I came to see Little Red,” Vince says, “and I was surprised by it. I was inspired by the idea of being an actor. I was thinking, ‘Wow! I wish I could be up there, too.’ Now I’m in this show, and I really like who I am. When I’m acting, I’m happy. So it’s a dream come true.”

Three days later (and an even three weeks before opening), the Alchemia actors have hit their stride. The nerves and worries so evident a few days before have given way to a joyful exuberance that’s thoroughly infectious.

“OK, from the top of the show!” Jahren grins, clapping her hands for emphasis. “You guys totally rock! You ready? Let’s do this! And don’t forget to smile!”

Fenex plays the opening music, as the cast line up in a row around the stage. Michael and Laura step forward.

“This is the story of living with different abilities.” Laura says, confidently.

“We want to talk about disability,” states Matthew, not forgetting to smile. One by one, the cast steps forward.

Raising their arms, as Jahren gives them all a huge thumbs-up, the cast begins to sing.