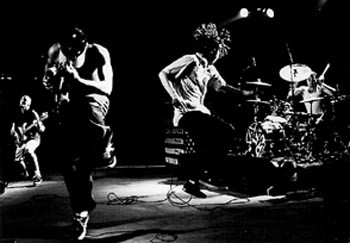 Rage Against the Machine

Rage On: You don’t have to agree with their radical politics to appreciate the raw power of Rage Against the Machine.

DROP DA BOMB! It’s only fitting that the year started with a big musical bomb–U2’s disappointing and much overhyped POP! album–and ended with the explosive eponymous video release by Rage Against the Machine, the L.A.-based metal band that not only has inherited U2’s vaunted crown as rock’s reigning political force, but also upstaged their Irish counterparts as an opening band at this year’s otherwise disastrous POPMart tour.

Fueled by dreadlocked singer Zack de la Rocha’s angry lyrics–including such screeching, expletive-driven tirades against the ills of American society as “Killing in the Name” (with its anthemic refrain “Fuck you, I won’t do what you tell me”) and “Bullet in the Head”–and Tom Morello’s buzz-saw guitar, the Grammy-winning RATM is an alternative media forum bristling with rebellious political polemic and supported by CD sales, concerts, and its own Propaganda Network web site.

These aren’t angst-ridden, suburban youths whining that they’re misunderstood. These are fiercely angry young men who align themselves with the Zapatista rebels in rural Mexico and demand the release of jailed American Indian Movement leader Leonard Peltier and death-row inmate Mumia Abu Jamal.

And they have credentials. During the ’50s, Morello’s father fought British colonialism in the bloody Mau Mau uprising in Kenya, his uncle Jomo Kenyatta was the first elected president in that East African nation, and his mother was a driving force behind Parents for Rock and Rap, an organization that has fought censorship in the music business.

At a time when music biz execs are crying in their expense account receipts about sagging record sales–as if anyone with half a brain is perplexed that the cookie-cutter alt-rock flooding the stores fails to excite–RATM has shown that the major labels can stand by their guns and sign bands with the power of their convictions.

RATM has that in spades. Sure, there are those detractors, and the Web is filthy with their chat, who find contradictory that a metal band–capable of crossing over to both white rock and black rap audiences, and signed to a corporate label–can rail against the machine, what the band itself defines as “the overall corporate capitalist bureaucracy that we are trained to obey from birth.”

RATM admits that some alliance with the corporate world is necessary to connect with the widest possible audience. Still, the band has not diluted its message. That’s good news for those who complain that modern rock is more often defined by style and fashion–from the flannel-clad grunge of Pearl Jam to the spiky-haired retro posturing of Green Day–than the aggressive assault on the status quo that has marked the best rock, from Chuck Berry to the Sex Pistols.

RATM–the band–has distilled anarchic defiance into a potent brew that shakes comfortable conventions and rattles nerves. Rage Against the Machine–the newly released 70-minute video from Epic Music Video–captures the band in all its ragged glory. RATM grinds its way through 15 segments that feature mostly live concert footage shot over the past four years, including the 1994 Pink Pop Festival in which a silver-haired grandmother introduces RATM as “the best band in the fucking universe!” The video comes with a CD single of the band covering “The Ghost of Tom Joad,” Bruce Springsteen’s post-folkie tribute to John Steinbeck’s Depression-era homage The Grapes of Wrath.

A half dozen “uncensored” video clips–liberally sprinkled with the F-word–juxtapose studio shots, subliminal messages, and staged scenes depicting the Mexican revolution and the 1973 FBI firefight at Pine Ridge that led to Peltier’s arrest.

All this rage has made RATM a target of the establishment the band fights in song. In September, a local sheriff in Washington state went to court in an attempt to block the band from performing at an amphitheater in George, Wash. In his complaint, the sheriff called the group “militant, radical, and anti-establishment” and alleged that RATM’s songs sport “violent and anti-law enforcement” themes. The show went on anyway, with a beefed-up security force busting 90 fans for a variety of minor drug- and alcohol-related charges.

In the end, despite the attempt at censorship, de la Rocha got the last word. He kicked off the show with a blistering rendition of NWA’s incendiary “Fuck Tha Police.” Citing civil-rights groups that estimate 80,000 cases of police brutality each year, de la Rocha later charged: “There ain’t nothing more frightening than [a cop] with political aspirations. We take it as an insult that he calls us violent, because everybody knows the police are out of control.”