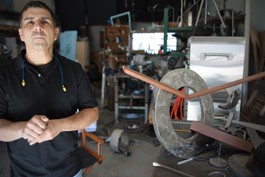 Photograph by Elizabeth Seward
Out of Time: Boback Emad’s sculpture aims to predate its future placement.

Y ou’re not going to be making anything big out here again, are you?”

The voice is gruff but plain, and it belongs to Boback Emad’s landlord, stopping by the sculptor’s studio to check on the strange happenings around the facility of late. Just weeks prior, Emad had erected a gargantuan two-story, particle-board model out in the driveway, and apparently the other residents of the area hadn’t viewed the wooden structure with the receptive, discriminating eye of an art connoisseur. “No,” Emad smiles reassuringly.

But Boback Emad is going to making something big again. So big, in fact, that he’ll need a crane to install it. Emad has been chosen out of 22 other entrants by the city of Santa Rosa to create and install Whole Some, a 24-foot-high, 18-foot-wide steel sculpture at the triangular corner of College, Mendocino and Healdsburg avenues as a northern gateway for the city’s downtown arts district.

“This sculpture evolved out of this site, it really did,” he says, poring over an enlarged satellite photo of the intersection in his northwest Santa Rosa studio. “It was about the complexity of this site—not just its architecture, but the visual angles and the speed. Because it is a very busy site, both visually and in real terms.”

Whole Some begins on the ground as an upturned, 90-degree triangle echoing the odd plot of land from which it will spring, made of weathering steel carved with incidental hieroglyphs. Continuing through the base floats the main attraction, a large, inviting circle of bright stainless steel, created to reflect the many changes of light at a well-trafficked intersection. As the final touch, to be visible for a half-mile around, is a beaconing antenna inspired by the angles of Santa Rosa’s DeTurk barn that shoots up from behind and turns directly and dramatically into the sky.

“All of this stuff”—Emad points again to the haphazard collection of streets and buildings in the overhead satellite photo—”it’s meaningful and it’s big and it’s heavy and you can’t move it, but none of it makes any sense! So in my mind, I thought that what I really want is something that gives purpose to this. That will make this feel like, ‘Oh, that’s why this place is all crazy, because of that thing! Because that was here first, and then they put these roads around it!'”

Along with Charles Ginnever’s Hangover II as a southern gateway in Juilliard Park and Ned Kahn’s Digitized Field on the old AT&T building to the west (an eastern gateway has yet to be chosen), Emad joins a growing cadre of artists whose work has been commissioned by the city to demarcate its burgeoning arts district. Emad’s sculptures have been installed all over the world—in Colorado, in Puerto Vallarta, at the Melinda French Gates building of Children’s Hospital in Seattle—but this is the first large-scale project for his own town. “I feel very lucky, where I’m at,” Emad says, “because there’re not a lot of artists who get the opportunity to make an effect on their community.”

I ask what emotions Whole Some expresses, and he looks at a model of the piece, thinks for exactly 12 seconds, then replies, “It has a quality of belonging,” he says, “and of happiness to me.”

For the most part, Emad is content to let his work speak for itself. He’s more likely to explain his sculptures by reciting a Sylvia Plath poem than with any of the usual descriptors like “bold” or “flowing,” and he maintains that his personal backstory has little, if any, involvement with his work.

Emad was born in Toledo, Ohio, in 1963 to two Iranian immigrants; his mother was a fashion designer who sewed constantly. “I think that what I got from my mother was that freedom, that plasticity of fabric,” Emad says. “She used to say, ‘There’re no ugly people,’ and she’s right. You get these people and their bodies are misshapen, but when you dress them up, you can develop any of those qualities that are there. She could use the fabric to do that. I think that was a big thing for me.”

As a teenager, living back in his parents’ native Tehran, he attended an American school of primarily military children, the gymnasium of which was bombed during the early stages of the Iran revolution. Luckily, Emad was out of school at the time, but his mother nonetheless sent him, at age 13, to safer shores two days later—first to Copenhagen and then to New York City, where he was picked up by cohorts of Ross Perot and eventually moved with other Iranian refugees to a house owned by the billionaire in Garland, Texas.

“One of the cool things he did that I always commend him for,” Emad says of Perot, was that “all the people who were in the midst of that tragedy got to go there.” Perot also signed a guardian form so the young Emad could return to high school.

After studying at Cal Poly, Emad worked in architecture but found it too creatively compromising. To make ends meet, he accepted various jobs, including working as a roadie for the Police in the early 1980s, disassembling and reassembling heavy arena speakers in the middle of the night. Twelve years ago, he and his wife bought a house in Santa Rosa on Lincoln Street, where his daughter was born, a half-block away from the destination of his multi-ton sculpture. A son has since followed.

When Whole Some is complete—Emad is shooting for some time in April—it’ll be trucked down the middle of College Avenue in the dead of night, taking up all four lanes and barely eking underneath a freeway overpass with just a two-foot clearance. Because of the work’s scale, Emad is prepared for the divided reaction that regularly accompanies public art. “If people don’t like it,” he says, “I suppose it’ll be hard, because of the hope I have for that site, of the hope I have for this city in terms of it being a place in the art world.

“Doing this, it satisfies a part of me that only it can do. I used to hear people say, ‘I couldn’t be anything else but an artist!’ I never understood that. But now I do. Because it’s not that you couldn’t do anything else—but the dissatisfaction, the hollowness, the emptiness would never leave you, to the point where you’re up all night. You can’t figure out why you’re up, so you find yourself with a pencil and paper. Pretty soon you’re on the floor of the kitchen making something. And you go, ‘Oh, wow. Yeah. That’s right.'”