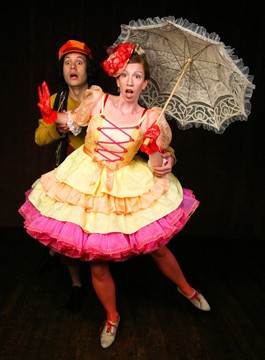 Put on a Happy face

Happy Birthday, Candide! Voltaire, that church-baiting, morally corrupt French philosopher and writer, published Candide, his best-beloved novel in the winter of 1759, making it a spry 250 years old this year. The novel follows the comic adventures of the trained optimist Candide as he is tossed into one disastrous calamity after another, including battles, desertions, monkeys, earthquakes, imprisonment, floggings, death sentences, shipwrecks and an unfortunate run-in with the Spanish Inquisition. Through it all, or least until the end, Candide maintains his belief that everything is for the best.

Such globe-trotting derring-do seems unlikely fodder for a lighthearted operetta, but in 1956 the great modern composer and conductor Leonard Bernstein (West Side Story, et al.) produced a deliriously melodious and upbeat musical version that won a closet-full of Tony awards and spawned an original soundtrack album still counted among the best ever produced. Yet, because of its massive, complexly elaborate plot, the show is seldom performed. Leave it to the daredevils at Cinnabar Theater to set aside such concerns, tackling Candide as part of their 2009 season. According to director Elly Lichenstein, the project has been a labor of love for her and musical director Nina Schuman.

“Oh, it’s a tremendously fun show, and I’m having such an amazing time with it!” she laughs. If the audiences have as good a time with Candide as Lichenstein and her cast have been having during rehearsals, it should end up being a hit for the lucky little playhouse on the hill. Will Hart Meyer and Sheila Willey are featured above.